Energy remains a major concern for Ontario greenhouse vegetable
producers, and they’re finding solutions in comparable operations
across the province. 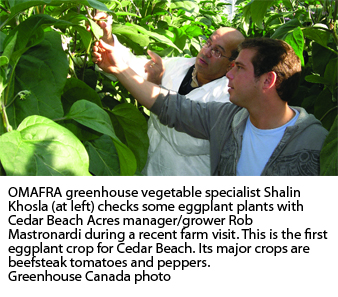 Energy remains a major concern for Ontario greenhouse vegetable producers, and they’re finding solutions in comparable operations across the province.

A major energy audit of 22 greenhouses was conducted last year, a representative cross-section of the Ontario floriculture and vegetable sectors by Ag Energy Co-operative. Sponsors included The Ontario Greenhouse Alliance (TOGA) and its member associations, the Ontario Greenhouse Vegetable Growers (OGVG) and Flowers Canada (Ontario), and the Ontario Ministry of Agriculture, Food and Rural Affairs (OMAFRA).

The audit identified key energy-saving features in both glass-covered and polyethylene-covered structures.

“We wanted to identify different types of greenhouses and crops, so that it will be easy for other growers to compare what they have against industry benchmarks,” explains OMAFRA greenhouse vegetable specialist Shalin Khosla.

It allows them to compare what’s available to help deal with energy challenges, and how those improvements could help take the chill out of energy costs. “It shows areas they can improve on.”

There’s a lot of interest by Ontario vegetable growers in energy conservation. One of the techniques is  the use of  energy curtains in glass as well as in double-poly houses. “Some growers have been working with curtains for years,” says Khosla. “It’s not a widespread trend, but we’re finding growers are looking into it a little more seriously than in the past.”

Another technique growers are implementing is altering the settings in their environmental computers, so that their venting and heating is set in such a way as to optimize energy usage.

And an increasing number of growers are utilizing temperature integration over a longer period of time to compensate for the highs and lows of outside temperatures.

Hot water remains a popular choice with new construction projects in the province, a trend that began in the last 1990s. These new units include condenser units with flue gas extraction systems, and hot water storage tanks. “During the daytime, when you really don’t need much heat in the greenhouse, you can run the boiler and use the CO2 in the greenhouse, with the excess heat stored in the tank for use at night.”

Biomass combustion systems are attracting a lot of attention. Wood-based material is the fuel of choice at present, but there is also interest in agricultural wastes. “A big question here is with the availability of the fuel,” said Khosla. “Is there enough material to burn” And just as importantly is the quality of the fuel.

“The better the quality, the easier it is to run.”

While biomass combustion sounds like a good deal, he cautions that growers must do their homework.

These systems require a lot of advance planning, along with ongoing maintenance and care while they are operating.

He’s been working with Dr. Fernando Preto of the CANMET Technology Centre of Natural Resources Canada to further research into biomass combustion. This past winter, they evaluated boiler efficiency with various fuels, with a final report expected later in the year.

Water use efficiency is another area he’s increasingly working with growers on, including improved water management in the root zone. “This involves the amount of water applied, when it is applied, the various tools used to monitor how much water was applied, and how much came out.” If the root system is strong, the plant will be able to take on more stress, “and will be able to withstand disease pressures longer.”
The pace of greenhouse vegetable construction last year in Ontario was off a little from previous years. There was much less glass construction than had been seen the previous two years.

“Most of the expansion was in double poly,” notes Khosla, “but growers are still looking at glass seriously.” One of the bene-fits of glass is that crops come into production about a week to 10 days earlier. Curtains significantly boost their energy efficiency, in both summer and winter. In the winter, curtains will reduce heat loss during the night. “In the summer, you can control the light and heat intensity.”

Diversification is the name of the game for most growers. Niche market plants being grown in increasing numbers include eggplants and beans. And even the traditional crops of tomatoes, peppers and cucumbers are welcoming new cultivars of different sizes, shapes and flavours. A host of smaller fruit sized cultivars are also proving popular, including mini cocktail tomatoes and mini cucumbers. Smaller pepper varieties are also being grown. So too are hot peppers, though on a smaller scale.

He emphasizes that much of his work is done co-operatively with others, including colleagues at the Greenhouse and Processing Crops Research Centre of AgCanada in Harrow, along with the support from the OGVG and other funding agencies.