Researchers are studying the effectiveness of DNA technology to detect micro-organisms. 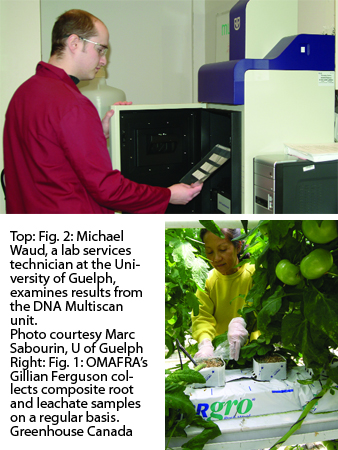 Gillian Ferguson, greenhouse vegetable IPM specialist with the Ontario Ministry of Agriculture, Food and Rural Affairs, is working with Marc Sabourin, plant pathologist of the University of Guelph’s Diagnostic Clinic, on the application of the DNA Multiscan®, a new tool available to growers for detecting micro-organisms and managing plant health.

The DNA Multiscan is a molecular technique that is based on detecting specific DNA fragments. Because each organism possesses its own unique DNA blueprint, this technology can detect organisms by species. The technology allows for the detection of organisms not only in plant tissues, but also in water, growing media and other substrates.

The ability of the unit to detect multiple pathogens simultaneously provides a timely and efficient manner for determination of the cause of possible disease problems.

Additionally, the assay quantifies each organism on a rating scale. It can detect many of the important disease-causing organisms, particularly those that are fungi. In the future, many other important pathogens, including bacteria, will be added to the list of detectable organisms.

The DNA Multiscan is a detection tool that was originally developed in Canada and then subsequently commercialized following international co-operation between several research institutes in Canada and Europe. It allows the identification of species of plant pathogens and some beneficial organisms in plant material, growing substrates, and irrigation water. The technique is very sensitive and can identify approximately 50 organisms at the same time.

“What may be of particular interest to growers is the detection of pathogens that are not as readily observable and, up to now, quite difficult to identify,” says Ferguson. One such group of pathogens consists of those that reside in the root system and growing media. “The DNA Multiscan can readily detect the presence of important root pathogens with minimal disruption to the plant.”

She said the technique is relatively new, and there are some questions associated with its use. Such questions include the following:

•    What background level of plant pathogens can be present in the irrigation water without adverse effects on the crop?

•    How do the levels of micro-organisms detected relate to disease expression or incidence in the crop?

In an attempt to obtain some answers to these questions, Ferguson has been collecting composite root and leachate samples on a regular basis (Fig. 1), from each of the three major crops – tomato, cucumber and pepper. These samples are analyzed by the University of Guelph Lab (Fig. 2).

At the same time that the root microflora are being monitored, growers assisting with the project are monitoring the crop for general root health and any incidence of plant wilt. Some important root pathogens that are being monitored include various species of Pythium, Fusarium, and Verticillium.

“The objective of this exercise is to provide growers with a means for early detection of the presence of potentially harmful organisms,” says Ferguson. “Although the mere presence of a potential pathogen should not necessarily be a trigger for control measures, it can certainly alert growers to the need to implement all the necessary strategies for disease prevention.”