Québec growers and retailers learned a great deal from a consumer panel discussion held during last fall’s IQDHO Expo. That feedback, coupled with the results of a 2005 industry survey, has them better prepared to serve the needs of the market. 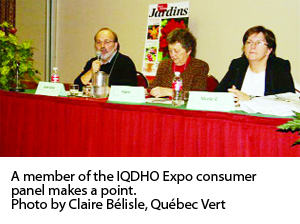 “What’s on their mind?” It’s a question retailers have long asked themselves in trying to gauge consumer trends and interests.

Québec growers and retailers learned a great deal from a consumer panel discussion held during last fall’s IQDHO Expo. That feedback, coupled with the results of a 2005 industry survey, has them better prepared to serve the needs of the market.

About 100 growers and retailers feverishly took notes during the often lively presentation by panelists representing a variety of horticultural interests. IQDHO director Marie-Claude Limoges got the idea for the panel discussion after attending a similar presentation at Ohio’s Short Course. She immediately knew it would be helpful for Québec producers.

“It went very well,” said Limoges, although some panel members were “uncomfortable” being asked by garden centre owners about why they shopped for certain items at big box stores. Some 80 per cent of growers in attendance also have retail operations.

The panelists responded candidly to about 40 questions.

The big box stores didn’t rate highly, especially with respect to levels of plant care. However, they were favoured for purchases of soil, compost, manure and annuals.

Garden centres clearly got the nod in the area of customer service, as respondents appreciated their expertise on plant selection and growing instructions. Panelists tended to prefer shopping there for perennials, trees and shrubs.

The consumers were asked about their most recent visit to a big box store to buy plants. “To our surprise,” said Limoges, “it was often just weeks ago, in November.” Many of them made late-season trips to replace dead plants.

Another surprise answer came when Limoges asked the panel to mention their favourite brands, and she listed a number of popular product lines. “They had no idea what I was talking about,” she said. “It went right over their heads,” suggesting that it may be retailers and growers in the province, and not so much consumers, who are more attuned to brand marketing.

The panelists stressed the importance of flyers and similar material circulated through newspapers and at the store entrances. The group said it was important to include plant tags with as much information as possible. And if plants in bloom are unavailable, high-quality photos are essential.

Gardeners are frustrated by stores with poorly identified plants, along with those with insufficient or inadequate labelling. A common complaint is buying plants that don’t meet the requirements of their plant hardiness zone designation.

Of course, fully blooming plants were in demand, “with no insects in them, or at least no holes or damaged leaves suggesting insect activity.”

The majority of panelists assumed all plants sold in the province are produced in Québec. “This was very surprising for us,” says Limoges. “They were surprised, as well, to discover it is not the case.”

The consumers thought there should be more advertising to promote locally grown plants. And while they said they would pay a premium for them, they did not specify how much more they would pay.

Frequent shopper programs, the consumers said, didn’t have much influence on how much or often they shopped at a store, although they were receptive to coupon-based, discounted-pricing campaigns.

Many respondents shop during the week to avoid crowds, and most prepare a list. Simply visiting a store to browse is rare, they said. But even with the list, impulse buys are common.

An important lesson for retailers is to have sufficient stock on hand. “If they (consumers) didn’t find what they wanted,” said Limoges, “they would check for it at another store, rather than buy something else.”

Annual spending for horticultural products per consumer ranges from $500 to $1,000. Women focused almost exclusively only on plants, while men tended to look mostly at gardening tools and accessories.

Joel Ceausu is a freelance writer and photographer in Montréal.