Features Business Trends
Flowers down, veggies up, in ’08 sales 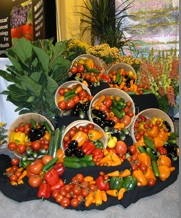 Flowers down, veggies up,
in '08 sales
Sales of greenhouse products declined 7.6 per
cent from 2007 to $ 2.1 billion in 2008, as an increase in fruit and
vegetable sales was more than offset by a drop in sales of flowers and
plants.

July 31, 2009, Ottawa — Sales of greenhouse products declined 7.6 per cent from 2007 to $2.1 billion in 2008, as an increase in fruit and vegetable sales was more than offset by a drop in sales of flowers and plants. Those were among the findings in the recently released Statistics Canada report, Greenhouse, Sod and Nursery Industries.

Total greenhouse area amounted to 20.8 million square metres, down from 20.9 million square metres in 2007, the second consecutive annual decline. It was accompanied by lower production and sales, and by a drop in employment. The nursery sector also experienced a slight decrease in sales.

Total operating expenses fell five per cent to $2 billion. Labour costs of $544 million accounted for 27.7 per cent of total expenses for greenhouse operators. The number of seasonal and permanent greenhouse workers declined by 8.6 per cent to 38,375.

Greenhouse operators reported total sales of flowers and plants amounting to $1.3 billion, down 13.6 per cent from 2007. Operators in Ontario, the largest producing province, reported a 20.7 per cent decline.

On the other hand, sales of greenhouse fruits and vegetables increased 3.7 per cent in 2008 to more than $813 million. Production in Ontario represented 58.5 per cent of sales at the national level.

The discovery of a phytosanitary problem in the tomato production process in Mexico in the summer of 2008 provided a boost to Canadian producers, whose tomato sales rose 4.5 per cent to $372 million. Sales of peppers, cucumbers and lettuce were also up.

In addition, the more than 1,000 nurseries in Canada sold trees, shrubs, seedlings and plants valued at $610 million. Growers in Ontario, British Columbia and Québec combined accounted for 87.1 per cent of total nursery sales, with Ontario recording the largest share at 45.6 per cent.

Expenses for producers of nursery products reached $501 million, with labour costs representing $200 million, or 39.9 per cent of total expenses. Nurseries employed 12,140 seasonal and permanent workers in 2008.

The nearly 200 farms involved in sod cultivation in Canada reported sales of cultivated sod of $130 million, including resale activities. They sold 8,950 hectares of sod. The total sod area declined 5.4 per cent to 22,569 hectares.

Ontario, Québec and Alberta were the main sod-producing provinces. The sector employed nearly 1,800 workers, three-quarters of whom were seasonal workers.

The 2008 issue of Greenhouse, Sod and Nursery Industries (22-202-X) is now available, free of charge, from the Publications module of that StatsCan website.