Growers are checking new energy – and crop – alternatives to help them cope with a combination of production and market challenges. 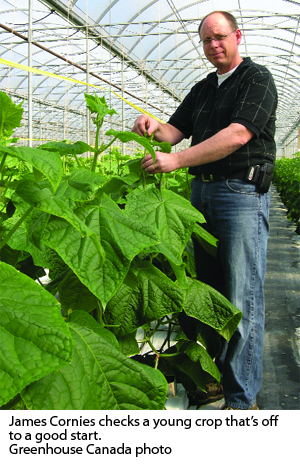 High energy costs, currency exchange rates that aren’t as favourable as they once were, and rising labour costs are all challenges for Ontario greenhouse vegetable growers.

Individually, they would be problem enough. Compounded, they are quite daunting.

However, there remains quite a bit of optimism in southwestern Ontario for continued growth within North America’s largest concentration of greenhouse vegetables.

Among those seeing the silver lining is James Cornies of Cornies Farms Ltd. in Kingsville. He’s also vice-chairman of District One of the Ontario Greenhouse Vegetable Growers association, an area that includes the Leamington/Kingsville region.

We last profiled Cornies Farms in June of 2000. James and his father, Robert, had just begun planting in their latest expansion of two acres. They had 11 acres in production at that time, all in cucumbers.
Fast-forward to our follow-up visit this past April. The farm now has 16 acres in production, and it’s still all only cucumbers! It’s mostly the traditional varieties, but there are also some mini-cukes.

They now have a closed irrigation system, and treat the water with ozone. This is the second year with the system, “and the crop looks much better.”

They now use water from drilled wells, instead of municipal water previously used. “Now our water comes in at a constant temperature of about 50ºF year-round. We can keep our rootzones much cooler in the summer.”

On the energy front, he has locked into a five-year gas contract at a price he can live with. As for industry colleagues, he notes there’s been considerable interest in biomass fuels, mostly those derived from waste wood materials. One grower is seeking permission to burn pellets made from garbage. Another has plans to incorporate a technology relatively new to Canada: anaerobic digesters that will produce energy from agricultural materials and wastes. There’s also been more coal burned.

While there has been a trend overall in the local industry towards hot water heating, Cornies Farms has maintained its steam system. “I’ve always grown with it, and it’s something that’s always worked well for us.”

As for the rising loonie, he says there’s not a lot growers can do about it except look for increased efficiencies elsewhere within the operation. “About 60 to 70 per cent of what I grow here is exported, so we’ve taken a big hit on the exchange rate. But you’ve got to try to run leaner, that’s about all you can do. We’ve got to prepare ourselves for the long haul.”

Labour is a major input cost, and the provincial government threw farming a curve when it decided to gradually increase the minimum wage over three years to $10.25. “That will have a huge impact on our industry. There was no consultation by government.”

He already pays considerably more than minimum wage, “but as the rate goes up, I have to keep pace and maintain that gap.” It will also affect the offshore labour program, because it’s based on what local workers are paid.

The offshore program has worked especially well for the industry, and is also welcomed by the workers.

Cornies had a worker from Mexico who “retired” from the program after 12 years. Working in Canada helped him buy a house, put his children through school, and helped him go into business for himself in Mexico. “He no longer has to come to Canada, but he thanked me for the opportunity to work here for so many years.”

Ontario growers are becoming increasingly diversified. A few growers are trying with some organic crops.

There have been more specialty tomato varieties and eggplants grown in recent years, “and mini-cucumbers have really taken off.” Cornies Farms was one of the first area growers to trial mini-cukes, back in the late 1990s.

Cucumbers are making significant inroads into U.S. markets in recent years. “There’s been much more exposure for cucumbers, and we’re penetrating further south each year.”

He’s been quite impressed with the work at the nearby Greenhouse and Processing Crops Research Centre on high-wire cucumber production with supplemental lighting.

(That work, led by Dr. Xiuming Hao, has shown year-round, high-wire cucumber production on raised troughs with supplemental lighting has achieved yields of between 280 and 300 cucumbers per square metre per year, about double traditional production levels. [Greenhouse Canada, June 2006, pg. 16].)
He’d consider such a system, should he replace some older glass houses with double poly units. Most of the farm is already in double poly. “I’ve been doing some number-crunching. I don’t want to expand the farm, I just want to increase the output.”

The OGVG co-hosted (with a local winery) a visit by Michigan chefs earlier this winter, to showcase their greenhouses and the range of vegetables being grown. The foodservice sector is a major market yet to be tapped.

“We can make a lot of inroads here,” he says. “At present there is very little utilization of greenhouse produce by the foodservice sector. But we can show them that we can provide a better tasting, longer lasting product that will help them better serve their customers.”

The OGVG’s food safety program is a major initiative, he says. For his farm, it requires the full-time staffing equivalency of one person to handle the paperwork. But it’s a small expense when weighed against the benefits of having such a program in place. Consumers are demanding such assurances from growers. “We’re at the forefront of this issue in Canada,” he says.

Marketing companies were certified last September, and it’s now the turn of growers and packers. They have a September deadline for completion of the necessary third-party audits.

Cornies has been on the OGVG board for four years. It’s sometimes a thankless task. “Sometimes half the people like what you’re doing,” he says with a grin, “and the other half doesn’t. It’s impossible to please everyone.”

The board features a good cross-section of the industry, a mix of big and smaller growers. “When the industry was doing well and everyone was making money, there were no issues. But when the margins go down and they look at what it costs to belong (to the OGVG), they start weighing the benefits. What I say is that it’s when times are tough that we have to work together. This is a wonderful industry that has been built with a lot of hard work.”

Serving as one of two district vice-chairs does take up a lot of his time. But he knows that when he’s tied up with board business, the farm is in good hands. “If I didn’t have the employees that I do here, I wouldn’t be able to do it. They’re really great.”

He spends about a day week on board business, including phone calls, member visits and meetings. “It was quite an eye-opening experience to become involved and see the range and complexity of issues being addressed,” he says. “So much of the work is done behind the scenes.”