Features Lighting Structures & Equipment
HPS vs LED: which is best for you?

Many growers are currently opting to install hybrid lighting systems, i.e. a mix of LED and traditional technologies – allowing them the benefits of both technologies. 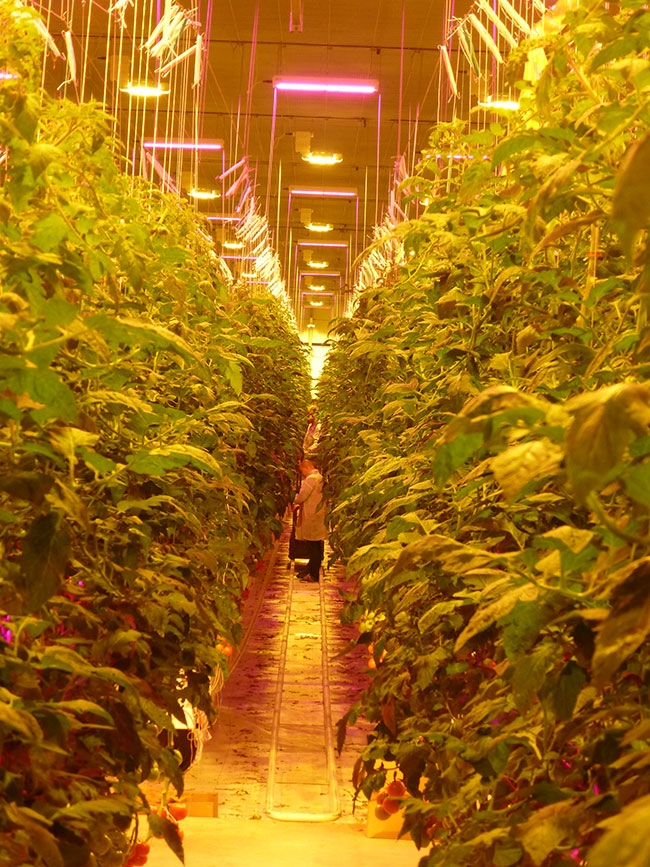 HPS or LEDs (or both): which system will work best for you?

October 2017 – The following are highlights of a presentation made during a research conference hosted by Flowers Canada Ontario earlier this year.

LED technology is increasingly being used in sole-source lighting (SSL) for all types of horticultural applications – both in greenhouses and indoor facilities.

There are many compelling reasons why growers are making the switch to LED technology, including:

Energy savings – LEDs use up to 40 per cent less energy than traditional HPS systems to deliver the same light levels.

From a horticultural perspective, the spectral “tunability” is probably the most unique benefit, so let’s take a closer look at what that means.

As you can see, the HPS lamp delivers the widest range of wavelengths; however, plants and humans perceive light very differently. The human eye responds most strongly to light in the green/yellow part of the spectrum, whereas plants respond most strongly to the PAR region (blue and red wavelengths) for photoperiodic growth responses and germination control.

Given that much of the light emitted by HPS lamps is not usable to plants – the HPS spectrum is far less efficient than with LEDs where the spectral output can be targeted to only those wavelengths that are useful to the plant.

Photosynthesis, flowering, climate response and photomorphogenesis are all affected by the intensity, duration, distribution and spectral quality of light. Since plants respond most strongly to the red and blue wavelengths, with LED-based sole-source lighting (SSL), we can tune the lighting to focus on what the plant uses most.

So one of the major challenges in designing LED fixtures for horticultural applications is developing optimum colour efficiencies or “colour recipes” to deliver PAR photons as efficiently as possible and essentially allow growers to “tune” their lighting to the optimal wavelengths for each stage of growth.

For example, if a grower wanted to encourage more compact growth, with sturdier leaves, they would use a higher component of blue light; however, if the intent is to encourage flowering, the grower would use less blue light and more red light. Similarly, the pigment of the leaves can be manipulated by using specific wavelengths

So all of this is very exciting, but we cannot dismiss the fact that there are still some obstacles to be overcome before we see large-scale adoption of LED lighting in horticulture.

In the past, there was no alternative to traditional light sources like HPS. So although we could measure light intensity (quantity), we were not able to measure the effects of specific spectral colour compositions. However, with the development of LEDs, this is now possible.

We are still very much in the research phase as far as light spectrum compositions and their effect on plant growth, fruit yield and quality goes. We are still discovering which crops respond well to LED lighting, and to specific spectral recipes. Even certain varietals can react differently to a particular spectral composition.

HPS or LEDs (or both): which system will work best for you?

Probably the most significant roadblock for widespread adoption of LED lighting is the high cost of ownership.

A good way to get a true comparison between the cost of LED vs. traditional lighting is to look at the cost per µmol delivered, as the outputs from one manufacturer to another can differ. Below is an example to demonstrate:

An incremental cost of four to five times that of HPS means you have to look at many factors to determine if the ROI on converting to LED makes sense.

Growers should consider not only the initial capital expenditure costs of the luminaires themselves, but also the incremental costs associated with a transition to LED lighting.

Growers in northern climates, for example, will have to compensate for the loss of heat from the traditional light sources in the winter – so the additional heating costs could negate energy cost savings.

There are undoubtedly many benefits to growing with LEDs. However, converting to LED technology is a BIG investment, so make sure you do your homework in advance.

Use the “LOGIC” checklist to bear in mind when considering an LED lighting system:

Guaranteed Quality: Look out for exaggerated claims. A reputable manufacturer will offer a complete system warranty with a rated lifetime of 50,000+ hours and a guaranteed photon flux maintenance under typical operating in a horticultural environment.

Return on Investment: Return on investment for LED lighting is different for every grower.

Payback calculations for LED lighting are only useful when they apply specifically to your situation. Look for a manufacturer who will provide a custom light plan that considers all the factors specific to your application.

Cost: A good LED lighting system is a big investment, so do your homework. Ensure you are considering all factors when calculating your cost of ownership. The cheapest price may turn out to be an expensive mistake.

What does the future hold for LED technology in horticultural applications? As we learn more about LEDs in relation to horticulture, we will undoubtedly see increasing general adoption as researchers, manufacturers and growers become more educated.

And much like the general lighting industry adopted a set of quality standards and benchmarks like the Lighting Facts program, so too will we start to see set standards emerge in the horticultural industry.

For now, many growers are opting to install hybrid lighting systems, i.e. a mix of LED and traditional technologies – allowing them the benefits of both technologies.

Steven Szewczyk is the regional sales manager for Eastern Canada and the Northeast U.S. for P.L. Light Systems/Agrilight Inc.