A spotlight on some of the latest research at Harrow, University of Guelph and Wageningen University 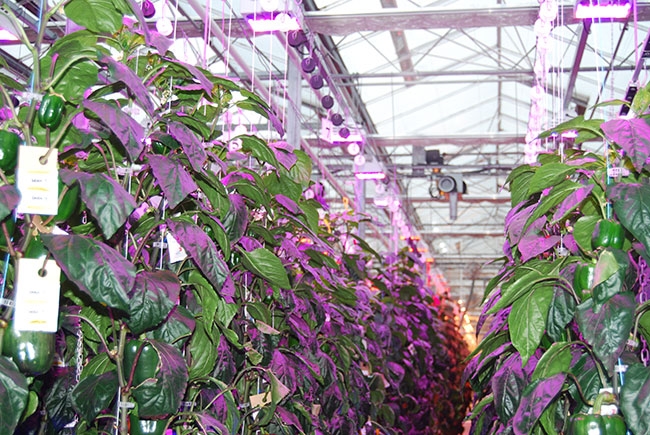 Lighting is essential with year-round vegetable production in Canada.

October 2017 – Lighting research is very exciting these days, with manipulation of LED placement and wavelength both possible. We checked with three leading greenhouse lighting researchers to hear about their newest studies – some ongoing and some recently completed, some new and some building on previous studies.

One of the projects of Dr. Youbin Zheng, associate professor in the University of Guelph’s School of Environmental Sciences, has the goal of determining the best light spectral combinations and intensities for indoor/warehouse and greenhouse microgreen production. This study, supported by the Natural Sciences and Engineering Research Council of Canada (NSERC) and Greenbelt Microgreens, involves investigation of both yield and quality (for example, nutritional value and post-harvest shelf life).

Zheng is also developing a feedback control system to manage greenhouse lighting in order to save energy and maximize crop production. The work is supported by the Ontario Ministry of Agriculture, Food and Rural Affairs (OMAFRA) and Heliospectra.

“Our recent trial compared the use of a conventional HPS control strategy with real-time feedback-controlled LEDs (which are dimmable) for the production of cut gerbera in Ontario during the normal supplemental lighting season of November to March,” notes Zheng.

“Results showed that the LED treatment had the same or better crop growth, harvest and quality metrics compared with HPS, while also delivering 15 per cent less supplemental light overall to the crop throughout the season.”

DYNAMICALLY CONTROLLED LEDS
Zheng says these results provide a compelling argument for the use of dynamically controlled LEDs as a supplemental light source for greenhouse production in the darker months in northern latitudes.

Another of his studies involves using LEDs to control plant height. Bedding plant growers often produce hanging baskets above the main lower crop level (bench or floor) in the same greenhouse to maximize use of production space, he notes. This practice reportedly can result in stretched plants at lower crop level, commonly considered a result of a combination of high-density plantings, competition for available light and changes in spectral composition from passing through an upper canopy.

“Our group has been investigating how to use different light spectral combinations and timing of light treatment on the morphological changes of several bedding plant species (e.g., petunia, marigold, geranium),” he explains, “to investigate whether we can control bedding plant height and flowering without using chemicals.”

CUT FLOWER PROJECTS
Supported by the International Cut Flowers Growers Association and Lumigrow, Zheng has also recently investigated the use of LEDs for producing cut flowers during the darker months in Ontario over three growing seasons.

In the second year, a single cultivar of cut snapdragons was produced using four different canopy-level supplemental LED intensities, and in the third year, two cultivars of cut gerbera (one starting in plug-stage and the other already in flower) were grown under five different supplemental light treatments.

The results of both of these trials can be used to help growers determine the optimum lighting setup for their specific production systems.

Zheng and his colleagues are also actively investigating the responses of different plant species to different LED light spectra and spectral combinations to unlock some of the mechanisms involved. This will guide the development of different lighting recipes for specific functions such as increasing or decreasing height, branching, increasing biomass production, promoting flowering and increasing certain nutrients in edible crops.

“In Ontario and most places in Canada, we are short on light from October to March,” says Hao, who is based at the Agriculture and Agri-Food Canada (AAFC) centre in Harrow, Ontario. “Growers want to plant tomatoes, cucumbers and peppers in September or October in order to harvest around Christmastime to get the best price. Supplemental lights can achieve this, but variety, nutrition and climate control are important factors affecting plant growth and fruit production and need to be adjusted.”

This and Hao’s other projects are being funded by AAFC Peer Review Program, AAFC’s AgriInnovation Program and the Ontario Greenhouse Vegetable Growers.

Hao and his colleagues have already found that lower intensity over a longer duration costs less in capital expenses with fewer light fixtures required per unit area. However, crops exposed to longer periods of light can be pushed beyond their limits; the yellow spots of chlorosis will appear on leaves and there can be little yield increase.

“We’ve developed a solution where we lower the temperature right after the supplemental lighting was shut-off during the darkness so the crop has a better rest and is not so stressed by the increased duration of light,” Hao explains. “A temperature of 13.5 to 14 C is suitable as a minimum for tomatoes, 13 C for cucumbers and 15.5 to 16 C for peppers, to maintain quality. There are also small differences among varieties.”

Not only does the temperature drop give the crop a good rest, but while it occurs, leaves cool faster (due to their large surface area in relation to volume) than the fruit (larger volume). This causes the plant to focus on growing the fruit, resulting in faster fruit growth and increased yields.

“You only want the temperature to stay lowered for about a half-hour to one hour,” he says, “just giving the plants a little shock.” In addition to ensuring better yield, lowering the temperature also saves growers money on heating.

Lighting is essential with year-round vegetable production in Canada.

FAR-RED LED LIGHTING
Hao is also studying far-red LED light, wavelengths in the 720 to 750 nm range out of the visible range of humans. Applying far-red light at the top of plants is interpreted by them to mean they are being shaded, and in response stems and leaves stretch to reach for more light.

“Most greenhouses currently use HPS lights that produce lots of heat and the plants are very compact,” Hao notes. “However, with bushy plants, the light is being blocked by leaves and not utilized efficiently by the plant. With far-red LED, you get a longer plant that can intercept and absorb more light, and can achieve higher yields in the early production period in tomatoes and sweet peppers. Later on, the canopy is thicker and there is no effect.”

Cucumbers do not show any effect, he explains, because they grow very quickly in comparison.

Hao is also in the first year of a three-year comprehensive study looking at the use of LED lighting to improve crop growth, fruit yield, quality (including anti-oxidants) and pest control efficiency on tomatoes, peppers and cucumbers. Team members include Dr. Rose Labbé at Harrow (biocontrols and pests); Dr. Aiming Wong of AAFC London Research Centre (how LEDs might help greenhouse vegetable crops increase tolerance or resistance to virus disease); Dr. Rong Cao of AAFC’s Guelph Research Centre (antioxidant levels in fruit); and University of Guelph scientist Dr. Bernie Grodzinski (how LEDs can speed up the movement of starch from the leaves to the fruit for increased yield).

“Red light is good for growth but blue light and UV-A light is better for fruit quality,” Hao explains. “With LED lighting, you can change the wavelengths at various heights. With red light and far-red light at the top and blue light in the middle, we try to increase both fruit yield, and quality and antioxidants at the same time.”

For fruiting greenhouse vegetables such as tomatoes, the translocation or movement of photo-assimilate (sugar etc.) from leaves to fruit is very important. Jason Lanoue (a PhD student at the University of Guelph under the supervision of Grodzinski and Hao) is studying various spectra of LED and developing LED light recipe to promote the translocation of photo-assimilates from leaves to fruit for increasing fruit yield.

WAGENINGEN PROJECTS
At Wageningen University in the Netherlands, Dr. Anja Dieleman has been working on LED greenhouse lighting for five years.

During the last few years, within the framework of the EU HI-LED Project (www. Hi-led.eu), Dieleman and colleague Esther Meinen have been studying the effects of light colours on young pepper and tomato plants. They found two hours of green light at various times of day all provided taller plants with more open canopy, with light better able to penetrate the crop. These results show that green light provides plant ‘stretching’ effects similar to far red light. The effect of other colours was similar to white light.

Dieleman and her colleagues have also developed lighting recipes in which plants received a few hours of blue or green light in the morning followed by red light during the rest of the day (in addition to normal solar greenhouse light). Several hours of blue light at the start of the day led to an eight per cent increase in tomato production.

“In the last few years we have been working on adding far-red light in the cultivation of tomatoes, with striking results,” Dieleman adds. “Adding far-red light favours assimilate partitioning to the fruits, at the expense of the leaves, which led to a five to 20 per cent increase in tomato fruit production depending on the variety.”

Dieleman and her colleagues are also still working on the design of low carbon footprint production systems for tomato production, based on LED lighting and varieties that suit this lighting system best.

Treena Hein is a freelance writer in Ontario and a frequent contributor to Greenhouse Canada.