When using biocontrol, it is important to understand the role that pesticides play in supporting the program. 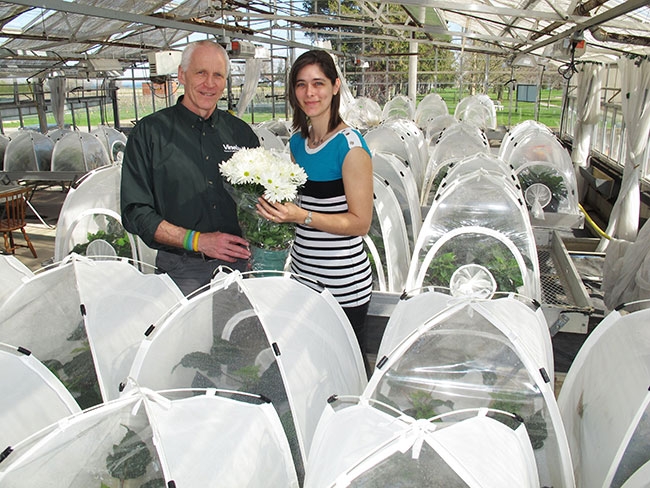 October 2017 – This is the last part in a six-part series of articles on thrips (and other pests) integrated pest management, where we provide practical application tips and tricks, information on new technologies and how it all fits within an overall IPM program. Each article is accompanied by a short video demonstrating a technique or principle.

The content of this series is based on research performed at Vineland Research and Innovation Centre and is supplemented with ‘information from the field’, contributed by colleagues using biocontrol strategies in greenhouse production. For more information on specific biocontrol agents or IPM in general, see www.greenhouseIPM.org.

Imagine a pesticide that is effective against a wide range of pests, resistance doesn’t develop, is safe in terms of human health and the environment, and is completely compatible with all biocontrol agents.

Clearly, that’s a pipe dream but what if we lower our expectations a little; how about a pesticide that controls one or two pests and is compatible with a few biocontrol agents?

Definitely more realistic, but it still leaves the question: what is pesticide compatibility anyway, and how can we make use of pesticides to support biological control?

As Suzanne Wainwright-Evans (aka “The Bug Lady”) put it during the recent IOBC-Greenhouse IPM meeting: “Many growers are moving to integrate biological control agents into their pest management programs, but are finding that it is not as simple as just replacing a pesticide application with a release of insects or mites. Rather, a holistic approach needs to be taken to successfully move to a bioprogram.”

In short, many factors need to be considered when integrating pesticides with biologicals.

Ideally, a preventive biocontrol program will proceed exactly according to plan, providing excellent control of all pests on a long-term basis. Unfortunately, pest/natural enemy populations often get out of balance for a variety of reasons:

In any or all of these situations, judicious use of pesticides may be needed.

When talking about the implementation of biocontrol in greenhouses, the issue of pesticide compatibility is always a major part of the discussion. All the major biocontrol producers have side-effects lists on their websites or available as downloadable apps that provide some indication of the acute toxicity of pesticides against various natural enemies. These lists rate the mortality of a specific natural enemy when exposed to a pesticide, ranging from “1” (0-25 per cent mortality) to “4” (75-100 per cent mortality), and state the length of time in days or weeks that residues will persist and be active.

You will note that compatibility does not mean safe. Even a pesticide assigned a “1” on the above scale can still kill up to 25 per cent of natural enemies. And if it is sprayed every week….

Information on side-effects is obviously very useful and growers need to have an understanding of the potential impact that pesticides can have (should they need them) on their biocontrol programs. However, there is more to pesticide effects than their acute toxicity. Whether or not a pesticide kills a biocontrol agent is not always so black and white. There are also sub-lethal effects, i.e., those that don’t cause death but may reduce the effectiveness of the biocontrol agent.

For example, there may be reductions in the searching ability of the predator or parasite, general movement, egg laying (number of eggs, egg survival and hatch), lifespan of the adult, fitness of the males and/or females in mating. The list is long and it is expensive to carry out all the trials needed to produce this type of information. For the most part, we get by on the bare minimum (how many adults/larvae are killed and how long do the residues remain active), but it is important to keep sub-lethal effects in mind as part of pesticide compatibility.

There is one other thing to bear in mind concerning side-effects. For the most part there is general agreement among the side-effects lists of all the major biocontrol producers. However, companies carry out their own research into side-effects and update their lists as new information becomes available. For this reason, the side-effects listed by different companies do not always agree, and there may be disparities in the assigned toxicity rating or the period of residual impact. Whenever there is a discrepancy, use the more conservative value, i.e., the highest toxicity rating and the longest residual period. Treat side-effects lists as guidelines rather than as permission to spray.

When considering pesticides that can support a biocontrol program, we can think of them in terms of how they should or should not be used:

Those that should never be used – ever! These are often highly toxic to natural enemies with a persistence of 2-3 months, sometimes more. Many of these are older pesticides, e.g., pyrethroids such as permethrin (Pounce) and deltamethrin (Decis), and many organophosphates such as malathion, chlorpyrifos (Dursban/Lorsban) and acephate (Orthene).

Can sometimes be used – maybe. These include pesticides that are toxic to a broad spectrum of biocontrol agents, but have a shorter residual period than those described above. They can be used to clean up a greenhouse (especially while effects of more persistent products that have been applied still exist) or in spot sprays (but be careful with spot sprays; they still have the potential to seriously disrupt biocontrol programs). Examples include abamectin (Avid), which is highly toxic (4 on the side-effects scale) to a wide range of biocontrol agents and has a residual period of two to three weeks.

Some products may be much more toxic or have a much longer residual period against predatory mites than against insect biocontrol agents. Additionally, some of these products may be safe when applied as a drench, but harmful as a spray. For example, imidacloprid (Intercept) is generally safe to use as a drench in a predatory mite-based biocontrol program, but not if used as a spray. Yet, no matter how you apply it, it will be very disruptive to parasitic wasps such as Encarsia or Diglyphus. But imidacloprid’s future is uncertain at this time…

Toxic products with an important role in IPM. Although toxic to many biocontrol agents, certain products have virtually no residual effect and biocontrol agents can be re-introduced almost immediately or within a few days. Examples are soap, mineral oil, DDVP. DDVP is very old chemistry (an organophosphate) and is highly toxic to almost everything in the greenhouse (including people), but it is also very volatile, vaporizing quickly and disappearing from the greenhouse in one to two days. As such, it is widely used as a cleanup product prior to introducing biocontrol agents because the impact on them is so short-lived. The registration of DDVP is currently being re-evaluated by the PMRA in Canada.

Somewhat compatible. These are pesticides that have varying levels of impact on biocontrol agents and generally short persistence:

What about pesticides other than insecticides/miticides? Various fungicides and plant growth regulators (PGRs) also affect biocontrol agents. While materials in both groups are commonly less toxic to biocontrol agents than insecticides or miticides, there are exceptions. Thiophanate-methyl (Senator) is highly toxic to some biocontrol agents with a residual period of over two weeks. To reinforce an earlier comment, be careful; one Side-Effects List shows this product has Level 4 toxicity against Encarsia, while another shows it as Level 1. As for PGRs, there is very little information in the Side-Effects Lists. However, research in North Carolina in 2013 showed significant sub-lethal side effects of some PGRs against Aphidius. So, do not assume that such products are safe.

Those that are completely compatible with all biocontrol agents. Are there any?

One final point needs to be emphasized. Compatibility of pest control products needs to be considered within the context of the entire crop management program. We cannot focus just on thrips or whiteflies – or whatever the primary pest of concern may be. For example, the use of imidacloprid (Intercept) can lead to an increase in spider mite populations. The products that might be considered to control a secondary outbreak of a pest such as tarnished plant bug, may have impacts beyond just that target pest. Similarly, many miticides also have insecticidal activity, so there may be unintended consequences for beneficial insects. Conversely, insecticides may be harmful to predatory mites. This may seem counter-intuitive but these assumptions are often made, and failure to check the compatibility of pesticides prior to their use have resulted in program failures.

To summarize, when using biocontrol, it is important to understand the role that pesticides play in supporting the program. However, equally important is to know their limitations, and to appreciate that our knowledge is far from complete.