Every operation has different requirements; as with any technology, there are many considerations to take into account before taking the plunge. 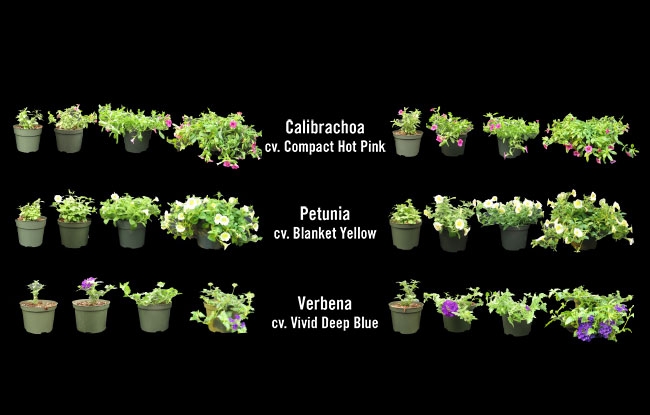 Figure 1. A visual of the HPS versus LED trial in spring bedding plants shows the difference in plant size and habit across production weeks.

OCTOBER 2017 – There’s been a lot of talk about light-emitting diode fixtures (LEDs) in the greenhouse industry over the last few years. They are often marketed as the solution to our electricity woes with the added benefit of spectrum control for specific crops.

However, as with any technology, there are many considerations to take into account before taking the plunge.

The purpose of a greenhouse is, in part, to use the sun as much as possible.

For Canadian greenhouses, this is more challenging through the winter months when there often isn’t enough light for optimal production. As a result, efficient lighting to supplement or adapt light in the greenhouse for improved production under low light is of interest to many year-round growers.

However, when it comes down to comparing LEDs to standard greenhouse lighting practices, we are often left with many questions.

High-pressure sodium (HPS) lights are well known to us. They provide a full spectrum of light that can be used by the plant (PAR light, or Photosynthetically Active Radiation), along with a heat byproduct, which you may be happy to reap benefits from through the cold winter months.

However, with the cost of electricity set to jump in the next few years, this wasted energy isn’t the most efficient way to heat or light a greenhouse.

On the other side, much of what we know about LEDs is still evolving, or unknown. We know that they waste less heat and are more
energy efficient compared to HPS lights.

Not all LED fixtures are created equal, and depending on the light intensity and spread, you may need more fixtures in the greenhouse to achieve a similar light level as compared to HPS fixtures.

Compared to HPS, LEDs remain a larger upfront investment, but the energy savings may help to pay that upfront cost back in the end. The benefits tuning the light spectrum to produce the same high quality crops in addition to value added traits such as different colouring, habits or flavour profiles is certainly exciting, and is the focus of several research projects.

Greenhouse lighting research projects in Ontario continue to look at both cut and potted flower crops. The studies highlighted in this article have focused on the comparison of HPS to LED (typically 70-80 per cent red to 20-30 per cent blue ratios) light.

Figure 1. A visual of the HPS versus LED trial in spring bedding plants shows the difference in plant size and habit across production weeks.

CUT FLOWERS: On the cut flower side, gerbera have been shown to be more consistently of market quality across harvest weeks under LED lights, but the harvest is slightly less than with HPS (Zheng, Llewellyn and Vinson; University of Guelph).

Ongoing work in lisianthus and chrysanthemum has shown that buds are initiated faster under HPS than LEDs of various spectrums, but this is probably more related to the extra heat given off by the HPS fixtures than the spectrum itself (Grodzinski, Leonardos and Ma; University of Guelph).

Potted crops: Work done at the Vineland station by OMAFRA and Flowers Canada Ontario with potted crops has found that different species are more sensitive to the difference between HPS and LED than others.

Our initial trials focused on the spring bedding plants verbena, calibrachoa and petunia.

Consistent with the cut flower studies, flowers grown under HPS lights accumulated more dry mass than those under LEDs (Figure 1).

In terms of plant spread (as measured by the height and width of the crop) and flowering time, the results indicate that the variety or species may have a large effect on how the plant behaves under different lighting (Figure 2).

Differences in size and flowering weren’t seen or weren’t significant in both calibrachoa and petunia. In this case it’s likely that the genetics, especially for the compact calibrachoa variety, played a role in this response.

The verbena however was significantly larger and approximately one week earlier to flower under HPS lights. Considering a temperature difference of between 2-4 C at the leaf level between HPS and LED pots, this result isn’t surprising. However these results do emphasize the importance of trialing out species specific responses in your own greenhouse.

As with all research, answers to our most pressing questions lead to more questions! For example, what’s the effect of LEDs on your IPM program; do your pests or biocontrol agents work differently under different light? Are specific spectrums more critical at certain stages of production like propagation than others like finishing? What’s the overall effect of LED light on the shelf life of potted flowers?

Major changes to production systems, such as switching from HPS to LED lights, often require us to adapt other production practices to optimize growth production. So, for example, a switch to LED might mean that you need to irrigate less frequently, or account for an extra week in your production schedules. Remember, these details all needed to be figured out for HPS lights at one time too!

The takeaway: So, in the end, how do you know if LED lights are right for you? This is the ultimate question, and it can only be answered by taking stock of your own operation and asking some more questions. This will be an ongoing process of course, but here are a few to get you started: