Not only can you optimize the amount of light, but you can adjust the spectrum of colours to help achieve specific goals within your crop. 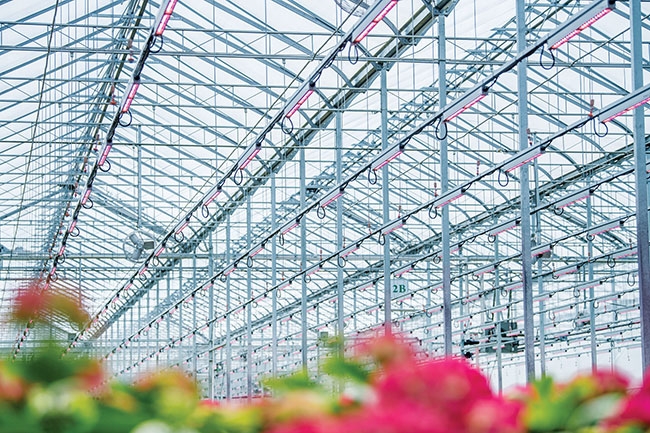 Natural light levels tend to be low in Abbotsford, BC where Van Belle Nursery is located. That’s why they use supplemental lighting in the form of LEDs. This has led to faster flowering and more compact plants, reducing the need for PGRs by 10 per cent. Photo credit: Signify (formerly Philips Lighting)

In our October article, we discussed how we can optimize lighting conditions for plant growth, how to measure light, the optimum lighting requirements for various groups of plants and how to calculate the deficit. Now that we are familiar with lighting basics, let us look into the spectral composition of light.

Spectral composition refers to the various wavelengths that are present in the light incident to the plant canopy. Different light sources will have different spectral compositions. If we talk about sunlight, it is considered full spectrum, covering electromagnetic radiations that range from near ultraviolet to infrared (Fig. 1). The solar spectral distribution will vary depending on the time of day and latitude, as well as the time of year.

When we talk about lighting requirements for plants with regards to the spectrum, we generally refer to the McCree curve, which shows the effect of particular wavelengths on photosynthesis (Fig. 2). As per the curve, we can observe peaks in the blue and the red wavelengths, as well as activity in the green and yellow regions of the curve. Blue and red light are known to be most effective in photosynthesis because they have exactly the right amount of energy to energize or excite electrons in chlorophyll pigments.  However, the McCree curve shows that the wavelengths in between also contribute positively to photosynthetic activity, likely due to the ability of green and yellow wavelengths to penetrate the crop canopy (more on this later).

It is extremely important to understand that, while designing supplemental lighting in the greenhouse, the focus should be on optimizing the photosynthetic activity of the crops. The predominant greenhouse lighting sources are HPS (high pressure sodium) lamps because of their high efficiency (1.9 µmol/J) and low initial costs compared to other conventional lighting. However, it is important to note that these fixtures are neither spectrally nor energetically optimal. Looking to the spectral distribution of HPS, we can see that most of the radiation is in the green and yellow-orange regions with some in the red and blue regions (Fig. 3). On the other hand, with improvements in LED technology, manufacturers are able to achieve efficiencies up to 3.0 µmol/J, as well as modify the spectrum to include more photosynthetically advantageous wavelengths

The human eye is sensitive to the white light generated by the sun. The white light contains all of the colours, but mostly orange, yellow and green wavelengths. Hence we can read and see things more clearly in these wavelengths. HPS lamps were originally researched and developed in order to illuminate dimly lit areas and to help the human eye see more clearly. Hence their target wavelengths were yellow and green. On the contrary, if our eyes were sensitive to red and blue wavelengths, HPS would have been designed to emit purple light for us to see things clearly.

That is the reason why even the units of light measurement are different for humans and plants. For humans, light is measured in lumens or lux, whereas for plants, it is measured in micromoles. For example, if we have a room lit up with 8000 lux using HPS, the human eye would detect that as a very bright light and we would probably wear sunglasses in that scenario. On the other hand, if a person enters a room lit up with red and blue light targeting 100 µmol/m2/s (which is approximately 8000 lux) things would not be the same. Because of the sensitivity of the human eye to yellow and green light, the person would feel that the room is not sufficiently lit.

However, if we had plants in the room, they would be actively photosynthesizing and would find that the lighting has been optimized for their requirements up to a certain degree.

Natural light levels tend to be low in Abbotsford, BC where Van Belle Nursery is located. That’s why they use supplemental lighting in the form of LEDs. This has led to faster flowering and more compact plants, reducing the need for PGRs by 10 per cent.

Why red and blue?
Different wavelengths penetrate differently into the leaf. Blue and red are efficiently absorbed by primary plant pigments chlorophyll a and b, whereas the green contributes to photosynthesis in leaves deeper in the crop canopy. The use of blue and red LEDs has been the primary choice for producers as these wavelengths are efficiently absorbed by chlorophylls in the optimization of photosynthesis (Fig. 4). Certain red and blue wavelengths are very effective in photosynthesis because they have exactly the right amount of energy to energize or excite chlorophyll electrons and boost them out of their orbits to higher energy levels. Now, looking at supplemental lighting requirements for crops grown in the greenhouse, these plants are already exposed to the full spectrum of the sun and receive their quota of blue, red, yellow, orange and green wavelengths from sunlight. Hence when we are optimizing lighting, we would target the peaks in the McCree curve and those would be blue and red wavelengths. If lighting needs are for sole source lighting (i.e. in the absence of natural light) we would consider a smaller percentage of yellow-orange-green wavelengths for these applications. In my opinion, it provides a dual advantage. Not only can we provide a much fuller spectrum to the plant’s photosynthetic pigments, these wavelengths will also support the human eye for better plant observations. However, it is important to understand that the green-yellow light in the fixture comes with a loss of efficiency compared to the red and blue.

Plant responses to lighting will vary depending on the species, cultivars, growing environments, and red-to-blue ratios, as well as the desired objectives. Broadly speaking, blue and red light in varying proportions could lead to a number of different plant morphological outcomes, including increased biomass, decreased leaf area, improved rooting, inhibited stem elongation, increased pigment content, increased number of stomata, enhanced fresh and dry weight, as well as enhanced flowering and fruiting, lateral branching and production of secondary metabolites – to name a few.

The rising world population creates an increasing demand for food products as well as ornamental plants. Also, the concept of supporting locally grown produce is in vogue, leading to an increasing demand for controlled growing systems including greenhouses as well as vertical farming operations. In both scenarios, there is a need for supplementary lighting which is fulfilled either by conventional lighting (high pressure sodium, metal halide or fluorescent) or by new LED technology. With high-efficiency LED fixtures, it is possible to reduce energy consumption and at the same time increase production capacity. It can be highly effective in improving the qualitative as well as the quantitative parameters of conventional growing. By optimizing light intensity as well as spectrum, we can certainly manipulate plant photomorphogenic responses as well as plant metabolism. Presently there is a knowledge gap in how to effectively use LEDs to generate specific, favourable plant responses.

Understanding the optimum requirements of light quantity as well as the impact of spectrum (wavelengths) in obtaining optimal plant responses is important for growers and for adopting LED technology.

When considering installing or switching to LEDs, be sure to:

Abhay Thosar, PhD is a senior plant specialist with Signify (formerly known as Philips Lighting). He can be reached at abhay.thosar@signify.com.