The pepper weevil can develop a large population (300-600) from fertile egg to adult within two weeks. 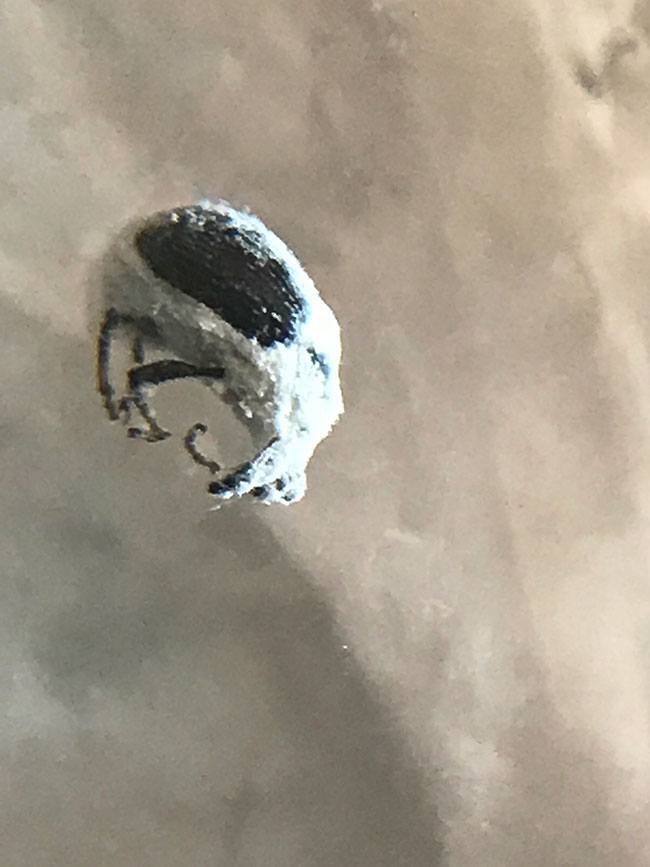 A dead adult pepper weevil collected from a greenhouse.

That’s because due to high temperatures in the greenhouse, the weevil can develop a large population (300-600) from fertile egg to adult within two weeks. As a result, the fruits or buds fail to develop a mature harvest and abort even at the older fruit stage.

Flowering buds and young fruits are the favourite parts of pepper crops in which the larvae develop. Adults can survive on stems and leaves in the absence of fruits and are ready to attack as the buds appear.

The female creates an egg cavity with her mouth parts before depositing eggs and will seal the puncture containing the egg with a light brown liquid that hardens and darkens over time. The punctures they create in peppers open penetration holes for different kinds of fungi.

Use of Entomopathogenic fungi like Beauveria bassiana, Fusarium temperatum, Fusarium verticilliodes, Metarhizium anisopliae etc., is one of the important control methods of insects including pepper weevil. Scientific reports show that both Beauveria and Fusarium have been used to control different kinds of weevils, including pepper weevil. But all these success stories are accomplished under controlled laboratory conditions, where the environment is ideal for the virulence of the fungi. The efficiency of these entomopathogenic fungi was found very low when applied under field conditions.

Following the trend and severity of the problem particularly in Leamington area GrowLiv Ltd started a research project in 2016 to beat the beast of pepper weevil. It is trying to solve the question of why entomopathogenic fungi are not working under field or greenhouse conditions.

After an extensive literature search and experimentation, the company is now able to control/manage the pepper weevil in four commercial greenhouses. The entomopathogenic fungi was found colonizing inside pepper fruit only when the pepper weevil larva moves into the fruit cavity. There was no fungus inside the fruit if the larva was killed by fungus at very early stage right inside the surface cavity on pepper fruit where the weevil deposited its egg. The procedures developed are providing a suitable environment to entomopathogenic fungi to grow faster and persist longer on the crop. This method has been observed highly fetal for larvae, pupae and adults of pepper weevil both inside and outside of the pepper fruit.

The MycoLiv system is a comprehensive approach towards a successful microbial control of pepper weevil. A suitable myco-insecticide and the biostimulant are key components of the system. The biostimulant is helping beneficial fungi to survive longer on the crop foliage, increases its virulence and colony forming ability. In general it improves plant health as well as the fruit quality and encourages growth of other beneficial microbes in the crop environment. The right concentration of the both components is crucial part of the program.

It is suggesting its own spray design. It uses high volume spraying (min. 200 L spray volume per acre), focusing mainly on the top one-third of pepper plant. Teejet (AI80015) nozzles are delivering the right volume and droplet size when operated at 15 bar pressure. Morphology of crop canopy, orientation of spray nozzles and the speed of sprayer determines the right amount of spray volume for proper coverage of target area. Crop work such as pruning helps lot for better penetration of the spray. A regular treatment of new growths on the pepper plant, right with the start of crop, might be helpful in controlling pest complex of greenhouse peppers including pepper weevil.