A research group at the University of Manitoba is working to supply northern communities with indoor cultivation technology, delivered in a shipping container. 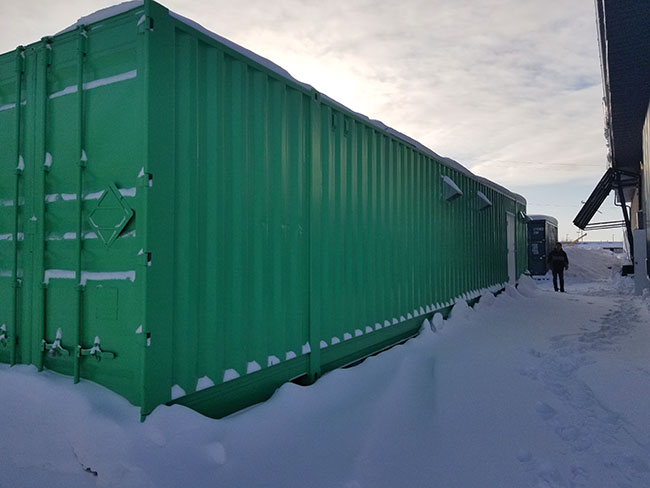 A research group at the University of Manitoba is working on a customizable and shippable growing system to help address issues of food security in northern communities.

Spearheaded by Dr. Qiang Zhang, professor in the Department of Biosystems Engineering, the design makes use of old shipping containers then adds insulation to the walls, installs grow lights, and builds other customizable parts tailored to the community’s needs.

Once built, individual elements are dismantled, packed into the container and shipped, ready for assembly at its destination.

Zhang’s group is now building out a prototype with a local company, using steel containers from Canadian Pacific Railway. If all goes according to plan, they hope to have it installed in an Indigenous community located in northern Ontario later this year.

“For the first demo unit, we’re going to be using an electric boiler to heat the container,” Zhang says. Other heating options that his group has explored include a wood pellet biomass boiler as well as a solar-powered hot water system designed by Natural Resources Canada. Both could be options depending on a community’s needs.

The container is also designed to hold an onboard water treatment system, as well as enough capacity to store weeks’ worth of water. Because residents of the partnering community showed greatest interest in tomatoes and strawberries over leafy greens, researchers opted for a soil-based growing system. But the container could just as easily be outfitted with a hydroponic system.

For ventilation, they’ve created a negative pressure system within the growing container. Using the exhaust fan, air is drawn into the container through holes in the walls and distributed along perforated air ducts that run within.

Once the prototype is in place, Zhang’s group hopes to figure out the best growing conditions for different crops, and in this particular case, tomatoes. “In the demo unit, we have all of the controls built in – temperature, humidity, CO2, lights. Everything can be controlled and monitored through wi-fi.”

He adds, “We will also monitor energy consumption, water consumption, and see how much it’s going to cost to run a system.” By tracking yields, they’ll be able to quantify the amount of resources needed for production.

“The idea is to have clusters of these containers,” he says. “The master container is the main one with all of the controls and heat source in it. Then you can hook up a few ‘slave’ containers to share the same brain and heat source.”

But their vision for these enclosed container systems doesn’t end there.

About a decade and a half ago, Zhang’s team successfully designed a solar energy greenhouse that replaced the north-facing side with a solid wall.

“If you think about it, why do you need a transparent surface on the north side of the greenhouse? There’s not much solar radiation coming from the North,” poses Zhang. “By putting a wall there, it does two things to make this greenhouse more energy-efficient.”

First, the design cuts down the glazing surface by half, which reduces heat loss. The wall also helps stop the infiltration of cold air, which would otherwise displace the warm air within the greenhouse and lead to greater heat loss.

Second, the wall acts as a heat reservoir. “The wall is actually built with two main layers. The interior surface of the north wall is a solid material – it could be concrete, it could be gravel. We used rammed earth, but that layer is about six inches of solid material acting as thermal energy storage, and then there’s another layer of insulation.”

During the day, the wall soaks up solar radiation. After sundown, the wall releases retained heat back into the greenhouse.

“This type of greenhouse is actually very energy-efficient,” he says. Zhang’s group tested this design without supplemental heat near Winnipeg. “Our tests showed… we can actually maintain the temperature in the greenhouse at night, pretty much above zero throughout the winter. Occasionally, it dipped a little below zero for extended cloudy periods, but it recovered very quickly.” 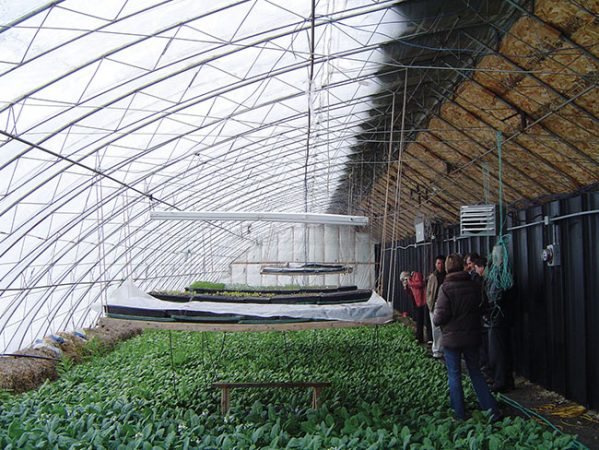 As for the south-facing side, they found that there was no need for a glazing surface at night, “so we put an insulation blanket on top of the glazing surface to further reduce heat loss.”

With its energy-efficient design, this type of greenhouse could be used in northern growing conditions as a way to extend the growing season. Two have been deployed commercially so far: one in Elie, Man. and another in St. François Xavier, Man for vegetable production.

“Typically in Manitoba, most people wouldn’t even start the greenhouse until late March or early April, and then everything has to be shut down by October,” he says. “But with this system, you can actually…start in February and you can grow all the way until November without supplemental heating.” 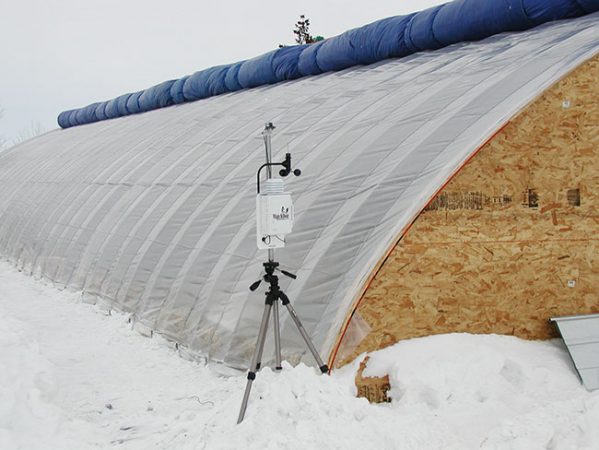 And uses an insulation blanket to reduce heat loss.

Putting two and two together

“The final idea is to put these two together,” Zhang says of the enclosed container system and the solar energy greenhouse. “We can actually build the greenhouse components, put them into the container and then take it north.”

In addition to serving as the north wall of the greenhouse, the growing container could be used for cultivation in the winter as well as a spot to start seedlings. “Then by April, you can move your plants from the shipping container into the greenhouse.”

The integrated system is still in its early design stages, but Zhang says it’s something they would prioritize if there’s enough interest.

In the meantime, the group hopes that their work can help relieve issues of food security, spur interest in horticulture and serve as a hub for northern and remote communities. Their shipping container project has received support from T&T Seeds, Winnipeg Environmental Remediations Inc., True North Aid, and Indigenous Innovations Corporation.

There are challenges and the most important one is energy, says Zhang. With many remote communities relying on diesel, electricity becomes expensive and fresh food becomes unaffordable. “I thought, as an engineer, why not try something from the engineering perspective? We can use technology to make it possible to grow in northern communities.”