The grow pod is housed in a 20-ft long container with 96 sq. ft. of growing space. Photo credit: ARF

In a small Inuit hamlet above the Arctic circle, about 1,000 km northeast of Yellowknife, lies a 20-foot shipping container filled with some of the region’s first growing vegetables.

Gjoa Haven, Nunavut, is home to the nation’s most northern vertical farming project. Known to organizers as the “grow pod”, this collaborative venture not only aims to develop crop production technology in the North, but empowers locals with the necessary tools and knowledge to grow plants of their own.

“We asked the Gjoa Haven Elders and members of the community to tell us what they needed most,” says Tom Henheffer, vice president of communications at the Arctic Research Foundation (ARF). The overwhelming response was a request for fresh produce. “It’s so expensive, and half the time it’s rotten [when] it gets here.”

For the past nine years, ARF has partnered with government groups and other research institutions on scientific and socioeconomic projects in the Arctic. Differing from other short-term northern research projects, ARF’s goal is to have a lasting impact and as such, their projects often have 20-year timelines. The results of their work have not gone unnoticed. Not only have they raised the public profile of Northern issues, their projects have led to progressive community development in the region as well. Leveraging the technology of their self-powered mobile science labs crafted from refurbished shipping containers, ARF is working collaboratively with Agriculture and Agri-Food Canada (AAFC), the National Research Council of Canada (NRC) and the Canadian Space Agency (CSA) to bring this vertical farming project to Gjoa Haven.

What made ARF the ideal partner was their proven track record of success with research projects in the Arctic along with their close relationships with local communities, says Quade Digweed. A greenhouse engineer at AAFC and one of the lead researchers on the project, Digweed worked closely with colleagues Dr. Xiuming Hao and Dr. Shawna Mackinnon to design the plant growth systems used inside the grow pod.

After receiving the green light last spring, the AAFC team had just three months to design, build, test and dismantle the grow pod in Harrow, Ont., ensuring that the container made the scheduled sealift leaving Montreal in July. “Everything that we could do commercial off-the-shelf, we did,” says Digweed. This turned out to be an advantage as most components had manuals, and more importantly, replacement parts readily available. “All the plumbing is [made of] PVC that you could buy at a local hardware store.”

Residents of Gjoa Haven were knee-deep in the project right from the start. They helped unpack the materials for the grow pod as the container exceeded the maximum lifting capacity of any local forklift, says Digweed. By the end of October, ARF and local technicians had finished setting up power for the pod, installing wind turbines and solar panels.

“Our first night on arrival in Gjoa Haven, Adrian Schimnowski (CEO for the Arctic Research Foundation) arranged a meeting with the local Elders,” Digweed recalls, recounting their first visit to the hamlet where the population of 1,400 is 95 per cent Inuit. “First we thanked them for letting us into the community, and they advised us of where to put the container because they knew where we would get the best wind in town…. The wind turbines have been spinning almost constantly since.”

Power is a big challenge, Henheffer explains. “Most of these communities are powered by diesel generators – there’s no electricity. Everything has to be off-grid.” Although diesel is not the most efficient means of power, it’s the only option available. “That’s why we’re developing this cutting-edge solar and wind technology,” he adds, which has been largely responsible for powering ARF’s mobile stations and this vertical farm.

“In the Arctic, you have extremely periodic sunlight,” Digweed explains. “For half the year, you’re getting close to no yield in the solar panels. For the other half of the year, you’re getting a phenomenal amount of energy out of them.” According to Travel Nunavut, Gjoa Haven experiences 24 hours of sunshine daily from mid-May to mid-July. While temperatures can reach 15°C in the summer, winters are more frigid at -20°C to -40°C, not including wind chill. As a backup, the team installed a diesel generator for days without significant wind or sun. 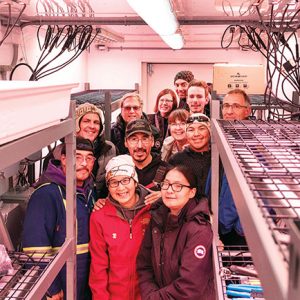 This grow pod not only tests vertical farming technology in Gjoa Haven, it aims to empower the local population to continue growing plants of their own. 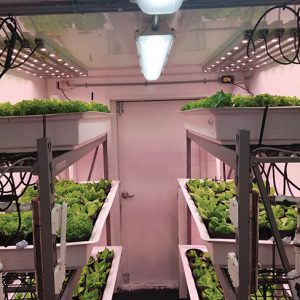 As the local technicians became more familiar with the system, the grow pod was able to produce 75 to 80 heads of lettuce per week. Photo credit: AAFC 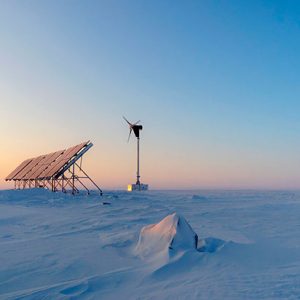 While most communities rely on diesel, the grow pod is mainly powered by solar and wind.Photo credit: ARF

“Controlling the humidity is very difficult because regular HVAC systems don’t work when it’s that cold,” Henheffer points out. “The ambient moisture will cause them to freeze and lock up.” While researchers look at possible HVAC options, the team has relied on natural air exchange to let out excess humidity.

“In front of our 20-foot grow pod, we have another 20-foot container that [ARF] previously used as a mobile science lab,” explains Digweed. As technicians enter and exit the facility through the mobile lab kept at 15°C, they bring in cool dry air that takes some of the humidity away from the grow pod, which is kept between 19°C and 21°C.

“Sammy, one of our local technicians, had actually put what he called a ‘breathing hole’ into the pod,” Digweed adds. “It’s how the Inuit would vent shelters out in the land. It was working quite well until we managed to put in a better fan system in February.” The next step will be to look at extracting waste heat before they exhaust the air.

Although the water lost through transpiration cannot be recaptured using this method of dehumidification, water consumed by the grow pod is still quite low. “There are four growth racks in the container, and each rack has a 150-litre stock tank below it,” says Digweed. With an ebb-and-flow system in place, he estimates that the tanks only need replenishing once every six to eight weeks using water from the town.

No pests or diseases

Inside the grow pod are twelve, 2 x 4-foot flood trays on four racks, amounting to 96 square feet of growing space. So far, the team has largely focused on microgreens and lettuce for their short turnover and proven performance in vertical farms. As the local crew grew more familiar with the system, they starting producing 75 to 80 heads of lettuce per week, says Digweed. Since then, researchers have tried different varieties of tomatoes to see how well they perform.

“One of the strengths of vertical farming is that it’s easy to keep clean because you control what comes in and goes out,” he explains. “For each irrigation cycle, the nutrient solution goes through a particle filter and then through a UV filter before returning to the trays.”

But supplies for indoor crop production, such as nutrient solutions and peat moss, are not readily available in Gjoa Haven. Instead, they’re shipped once a year via sealift. “The biggest challenge we face is exactly the same thing everyone faces in the Arctic – it’s isolated,” says Henheffer. “This particular community is quite barren… and getting stuff there is very difficult and very expensive.”

Once exhausted, the used growing media had been stored outside in conditions that were well below zero. There are talks of organizing an outdoor community garden or using the peat moss for other projects. “One of the visions of the system is eventually having a zero waste facility,” says Digweed. Researchers are looking into local alternatives such as fish waste or other materials that could be used as fertilizer. Digweed would like to see an optimized system that could supplement the missing nutrients rather than replacing the entire solution each time. “For now, we recirculate it until the solution’s expired every six to eight weeks.”

With the research team scattered across multiple research centres from Kentville, N.S., to Saskatoon, S.K., data logged by the grow pod’s various climate sensors are sent to researchers by the local team on a regular basis – but the end goal isn’t to run the vertical farm autonomously from afar.

“Our main focus is providing the toolkit for them to learn how to produce crops,” Digweed explains, “not necessarily to grow the best crop possible in a container in the arctic, but to give them the skills to do that themselves one day.”

By creating this common spot in the community, organizers hope to inspire interest and skill development in horticulture. For Henheffer, he would like nothing more than to see an entire network of these grow pods established throughout the Arctic. They’ve received nothing but positive responses from the locals, and a number of other communities have expressed interest as well.

The next step is to trial some culturally significant crops, such as teas and berries. The team had originally planned a summer expedition to locate seeds which aren’t available within the community, but these plans will largely depend on how the COVID pandemic plays out. Henheffer wants to avoid any chance of bringing the disease up to the hamlet where access to medical care is extremely limited and the closest hospital is a flight away.

“[Traditionally] the Inuit are not a people who farm – they’re hunter-gatherers,” he says, but with this project and hopefully similar ones in the future, that will change. “While they’re teaching us their traditional knowledge, we’re teaching them these new methods of growing. It’s really a beautiful synergy of North helping South and South helping North. It’s a cooperation that should have been happening centuries ago but is finally working now.”