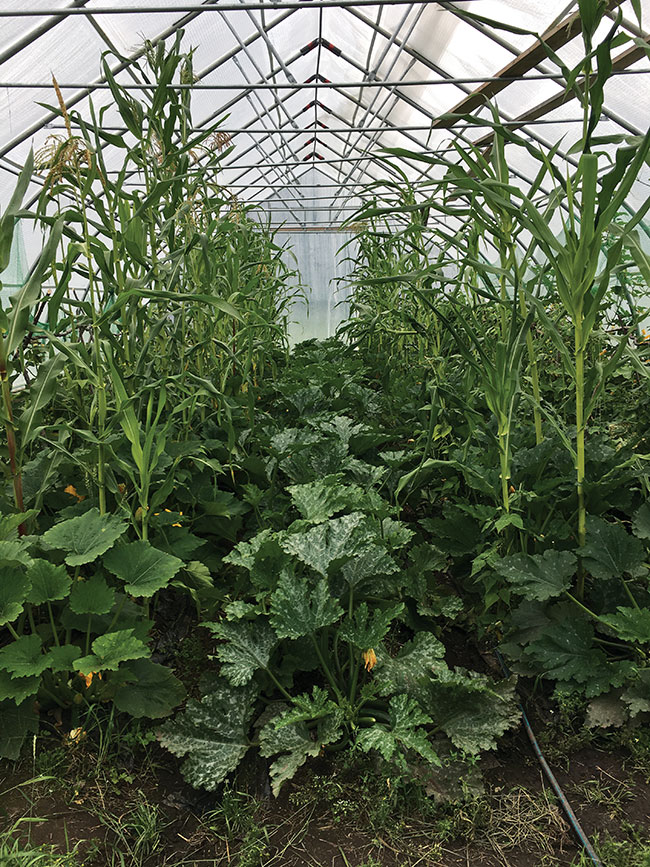 Growing nearly anything in the Yukon brings its own set of challenges. “We’re basically at the top of the world,” says Derrick Hastings, farm manager at the Tr’ondëk Hwëch’in Teaching and Working Farm. “We’re at the end of the road.”

Located on the outskirts of Dawson City, Hastings says they depend on a single highway to stock their local grocery stores. This was put to the test when parts of the road washed out in 2012. “The Yukon and the environment up here is unique for food,” says Hastings. “We produce one per cent of our food locally. [Almost] 99 per cent of it is trucked in.”

Seeing the potential for food scarcity was a key reason the elders of the Tr’ondëk Hwëch’in (TH) First Nation began the TH Teaching and Working Farm in 2014 on TH farming settlement land. It was important to facilitate self-sufficiency by producing everything from pigs, rabbits and a variety of crops, including broccoli, cauliflower, tomatoes and more. The farm also supplies many local eggs with over 300 chickens and their own egg-grading system.

Kent Mullinix, Director of the Institute for Sustainable Food Systems (ISFS) at Kwantlen Polytechnic University, explains the significance of this pursuit of food sovereignty.

“Food sovereignty implies the ability to control one’s type of food, source of food and way of eating,” he explains, which differs from merely gaining access to food. “To many of us and especially to Indigenous persons per my learning, [it’s] incredibly important.”

Mullinix says the effect of climate change on traditional food sources in northern communities has heightened their interest in developing capacity for local food production. “Lakes are disappearing. Caribou migration has completely changed. Traditional sources of food are disappearing,” he says. That’s one reason the ISFS was involved in developing the TH Teaching and Working Farm and has helped launch other similar enterprises.

“I think the goal of the farm,” says Hastings, “essentially is to bring about a more engaged citizenry in their food supply.” That’s where the teaching component comes into play.

“Through teaching, people can learn the art and science of farming in a hospitable, non-threatening, non-pressure of traditional school or of business,” says Mullinix, adding that these commercial farm models are essential ways to teach the next generation of regenerative farmers. “That’s also why we are working with the Nations because they are also interested in developing regional food systems, specifically to support their people,” he adds.

Hastings says everyone is learning on the farm. A lot of his own experience in agriculture has been through hands-on methods, from working on a grain farm in Ontario for a summer when he was younger and community gardens in multiple cities across Canada, to building his own homestead farm in the Yukon. “I think having a youthful enterprise, one that is developing together and building together is very important for the longevity of a project like this, especially in these northern communities,” he says.

One example of that was a young farmer interested in growing oyster mushrooms. The farm was able to support his project and now, according to Hastings, they’re the only commercial mushroom growers in the Yukon. “People have an opportunity to take part in all different types of pursuits; … it’s sort of an incubation idea,” he says.

The number working on the farm can vary, and Hastings says there were twenty employees this year. Some include young people like the mushroom farmer, and many are TH citizens. There’s one man who recently came from France to gather knowledge and experience he could take to start a farm in Haiti, his parents’ country of origin.

Aside from access to fresh produce, the weather in the Yukon is another unique variable. Not only is there still potential for frost on June 15th or August 15th, there’s intense sunlight during the summer months and over 20 hours of darkness per day for about three months in the winter. That’s why they grow the cold crops, such as Brussels sprouts and cabbages outside and crops that need protection from frost, such as tomatoes, cucumbers and corn, in the two smaller greenhouses they currently have.

An award through the Arctic Inspiration Prize and support through the Climate Change Adaptation Platform paved the way for further expansion with the development of a larger year-round greenhouse on the farm.

For Hastings, it’s important this greenhouse adds value to the operation on a long-term basis. Rather than just growing wholesale vegetables, his plan is to focus on producing value-added products that meet current food trends, such as pickled or fermented products.

While building plans are still in the works for the greenhouse, Hastings says they eventually want to have a mushroom-growing room and add a storefront to the structure where they can sell directly to the consumer. They also plan to add on a butcher shop and a processing kitchen, so people can process their wild game and workers can learn the trade of butchering. “It’s job creation,” says Hastings, “it’s a way to utilize the space completely and also long-term to create financial income outside of just a wholesale vegetable stream.”

Joe Sbrocchi, general manager with Ontario Greenhouse Vegetable Growers, says successful farming involves thinking about the overall business and adapting to local opportunities. “Greenhouse growing is not just … a science, there’s an art form to it and you have to work at that craft everyday,” he says.

Approximately 40 x 100 square feet, the planned greenhouse presents an opportunity for experimenting with a variety of innovations. Given the extreme difference in daylight throughout the year, artificial lighting takes careful thought. Hastings says the plan is to use LED lights for the cooler crops, since it’s more cost-effective, and high-pressure sodium lights on crops more sensitive to cold.

The farm chose a cordwood boiler, using a fuel that is more readily sourced in the local area.

Using a cordwood boiler as the main source of heat was a practical decision, since the short logs are easier to access locally and the farm doesn’t have the infrastructure to process and store wood chips. As backup, they’ll use an electric or propane heater.

The plan is to build raised beds with hydronic heating lines in the greenhouse, so the roots in the soil will be kept warm and the atmospheric temperature could be kept at a cooler temperature to reduce heating expenses. “I feel that’s a good way to approach heating and a space that size in the winter here,” says Hastings. Keeping the height of the greenhouse around 12 to 14 feet is another part of the plan to reduce their energy costs.

One advantage of living in a colder climate is that many pests stay away. While aphids and flies can be an issue some years, they manage them with organic methods such as insecticidal soap.

This is keeping in line with the rest of their farming practice. Hastings says their goal is to utilize their own animals to improve fertility in the greenhouse. Since they have rabbits and their manure can be used without being composted first, they plan to set the rabbit cages directly on the beds to improve fertility.

Because worms are not native to the Yukon, Hastings says worm composting is another simple, but important part of their fertility program. And with only a few months each year where composting is possible outside, the practice could also reduce waste products. “Figuring out how to create [compost] in our warm space all winter, that will be a big innovation for the North and I think probably something we could teach to other communities,” he says.

Spurred by a pandemic

COVID-19 has presented further opportunity for innovation, particularly with distribution. The farm’s regular outlets for sale include on-farm retail, farmer’s markets, community supported agriculture (CSA) boxes, as well as various nutrition outreaches such as Meals on Wheels. Hastings says sales for CSA boxes increased by 50 per cent this year. “We deliver the boxes, so that became a huge selling feature,” says Hastings, noting its convenience and alignment with public health guidelines.

Another point, noted by both Hastings and Mullinix, is that COVID-19 revealed just how little perishable produce is available to northern communities at any point in time. Even places like Dawson City only have about a two-day supply of food on grocery store shelves. “COVID-19 has revealed fragilities in our global food system, absolutely,” says Mullinix.

It’s also brought about greater consumer awareness in the area, Hastings adds. While competition among local producers has increased as a result of fewer tourists buying produce during the pandemic, consumers have seen the necessity of supporting their regional producers.

The increasing variety of nutrition that greenhouse growers produce is of greater value too, says Sbrocchi. “One of the best things you can do with respect to COVID is make sure your body’s best balanced to fight it through your immune system, and that means eating fruits and vegetables.”

At the end of the day, the TH Teaching and Working Farm is doing more than building a self-sustaining business. It’s establishing food sovereignty by providing fresh food to the local community, the TH First Nation and beyond, and at the same time, reducing reliance on an at times uncertain food supply. “I think what we have there is a basis of reconciliation on a practical level,” says Hastings. “We have something where we’re actually on the ground building change.”

Hastings hopes what they’re doing on the farm will gain an even further reach as time goes on. “People who have a desire to bring these types of projects to their communities in the North don’t have to start from scratch,” he says. “They can come and learn from our experience.”