What started as a solution to an immediate need has grown into a multi-dimensional hub for fresh produce in a northern Manitoba community. 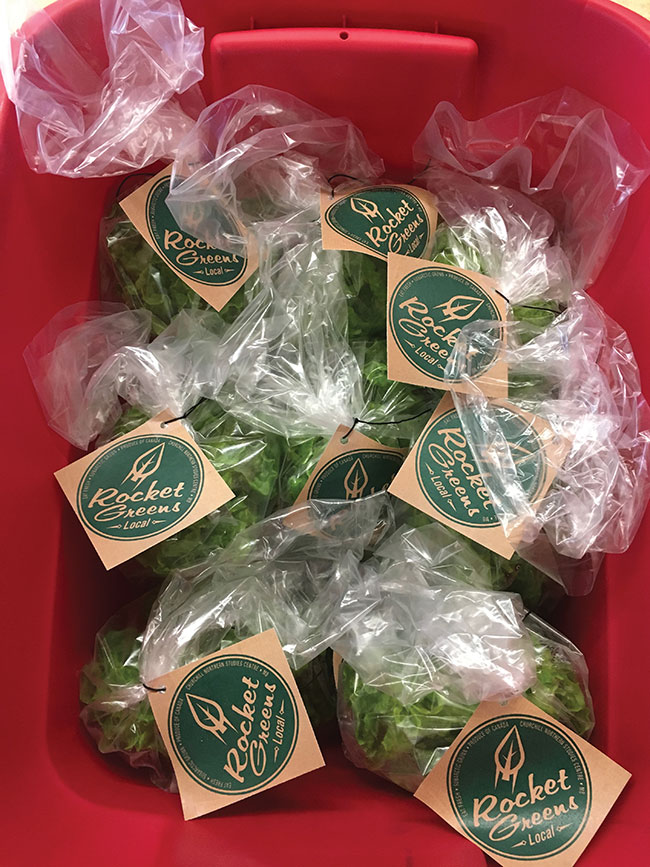 The hydroponic farm grows leafy greens, including different varieties of lettuce, spinach, kale, Asian greens, collard greens, and a selection of herbs. All Photos courtesy of The Growcer

CNSC is a field station dedicated to subarctic research and education with projects looking into food security and northern energy opportunities, among others. But when the region’s access to food became threatened, the centre found a way to extend a much-needed hand.

In May 2017, the northern Manitoba community lost its only land link to resources after a spring storm washed out the rail line. Churchill residents told CBC News that it left some stranded, unable to afford the $1,000-plus flight to Winnipeg, while the cost of food “doubled if not tripled” in town.

In response, CNSC acted fast to restore some food security, tapping into the Churchill Region Economic Development Fund and partnering with The Growcer, an Ottawa-based company helping communities grow produce year-round using modular hydroponic farms. The farming module made it onto the last ship of the season and arrived on Churchill’s shores in the fall of 2017.

Three years later, Carley Basler, the sustainability coordinator at CNSC and operator of their Growcer system, reflects on the success of the project.

“When you start something like this and you have no experience, everything feels like a milestone. First seed! First lettuce! Everything was a first, right down to first flood, first disaster,” Basler shared during an online webinar about the project. “I still feel every day is a milestone, keeping plants alive in subarctic temperatures is something else.”

The 40-foot hydroponic farm grows leafy greens including different varieties of lettuce, spinach, kale, Asian greens, collard greens, and herbs. It uses rockwool as its main growing medium. The farm recirculates water continuously and receives a top up of water every three weeks, so it is conservative in its water usage. For power, the farm is tied to the local electric grid. Whereas The Growcer’s first farm in Churchill uses a nutrient film technique (NFT) irrigation system, its most recent product release uses deep-water culture (DWC).

Produce grown inside the CNSC hydroponic farm supplies two local grocery stores, the hospital cafeteria, and depending on the time of year – such as polar bear tourism season – extra restaurants and businesses.

In September 2020, CNSC sold more than 40,000 units of produce to the community. Basler adds that more produce was actually grown, because in addition to selling, CNSC donates some of it to food banks and community groups.

Basler shares how there was a lot of “plant anxiety” in the early days of operating a hydroponic farm.

The produce grown inside the unit is branded as “Rocket Greens,” an ode to CNSC’s history of being located on the site of the former Churchill Rocket Research Range. This history, paired with a fun fact shared by a CNSC post-doc that “rocket” is also a term used to describe arugula, contributed to the final name of Rocket Greens.

“The beauty of the Rocket Greens and the fact that it’s so fresh, or essentially alive when we deliver it, is that [the greens] keep for a long time,” says Basler, explaining how food intended for the grocery store is more likely to age during its longer transit into town. “I bought broccoli two days ago and it’s yellow already.”

Basler adds that her subscriber turnover is very low, with many who signed on in the first week still receiving their Launch Box subscriptions today. “I’m happy to have the Launch Box specifically because that’s Churchill people and that means the most to me out of all of this.”

In late 2018, rail service was restored to Churchill but CNSC’s project continues to be a source of year-round produce.

Because usual tourism activities are limited during the pandemic, there is more produce going to the subscription box rather than restaurant orders. Basler has noticed the Launch Box performing better as Churchill’s population has remained fairly unchanged during this time. “Due to COVID actually, it has been the most stable, where I know what’s coming every week because there hasn’t been a lot of movement for anyone,” Basler says. Basler’s experience isn’t uncommon, with other Community Supported Agriculture (CSA) farms across Canada noticing an influx of subscribers in response to the pandemic, too.

Prior to operating the farm at CNSC, Basler’s growing experience was limited. She shares how there was a lot of “plant anxiety” in the early days where she felt the need to constantly check up on the plants, but this subsided over time.

“I moved past a lot of the [initial] plant anxiety and I take a lot more in stride now,” Basler says. She adds that her catchphrase is now “It’s just lettuce” as a reminder to keep things in perspective.

“Sometimes you get wrapped up in all the things that aren’t working right, harvests that aren’t as great as others, but at the end of the day I constantly remind myself when I’m in there, and the lights are on, and everything is green, that this is a super cool project. People that I know, who work and live around me, are eating food that we [at CNSC] grow.”

The farm at CNSC was also the first farm The Growcer ever installed. Corey Ellis, co-founder and CEO of The Growcer, says it was a learning curve for both Basler and him. “We had to go through that experience together to get a sense of what things needed to be done at the outset to make future [operators] more successful, more quickly,” Ellis shares.

While modular hydroponic farms boast the ability to grow in fully controlled environments, this type of growing environment does not make operators immune to troubles such as bolting or root diseases. In response, Ellis adds that the company poured more resources into its plant health training to be able to support operators long-term and to keep the technology accessible for those without growing experience.

“We knew early on, especially with the experience Carley and I had together, it’s not a matter of dropping off a box, ‘here you go.’ It’s very much a long-term ad hoc training program,” Ellis says. “There are some things you have to learn on the fly. The Growcer team is right there with you every step of the way to help you learn through those steps, but there’s no better experience than hands-on experience.”

Since 2017, The Growcer has partnered with more than 20 communities across Canada, from Gitmaxmak’ay Nisga’a Society in Prince Rupert, B.C. to Inukjuak in northern Que. However, for Ellis, the first farm at CNSC remains a reminder of the social impact that formed a critical part of the company’s foundations.

“The [CNSC] partnership means a lot to us. When [co-founder] Alida [Burke] and I started The Growcer, we were very purpose-driven and this was the reason we decided to get into this business. We wanted to leave an impact. It’s through working with people like Carley and her community that we feel a sense of purpose about what we’re doing every day,” Ellis shares.

Video: Catch a three-minute video of Carley talking about milestones and her experience.

Stephanie Gordon is editor-in-chief at The Growcer. She can be reached at stephanie@thegrowcer.ca.