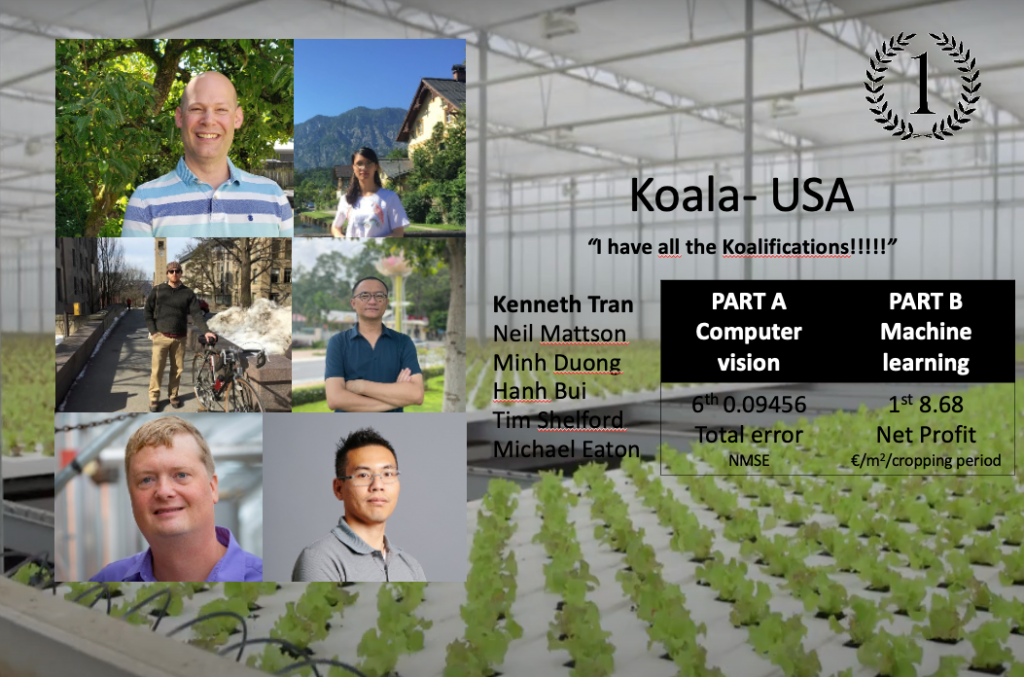 U.S.-led Team ‘Koala,’ has won the online challenge, the first part of the international competition organized by Wageningen University & Research (WUR) and Tencent.

The winning team was led by Kenneth Tran, CTO of artificial intelligence provider Koidra. Members of the team consisted of Neil Mattson, associate professor and greenhouse extension specialist at Cornell University, as well as Minh Duong and Hanh Bui of Koidra, and Tim Shelford and Michael Eaton of Cornell University. Members were based in the U.S., Vietnam and Canada.

During the online challenge, 46 teams from 24 countries were tasked with growing virtual lettuce using artificial intelligence in this two-part challenge. According to the release, teams developed “computer vision algorithms based on training images of lettuce plants. They then used the algorithms to detect growth parameters such as diameter, height, weight and leaf area.” The teams also “developed machine learning algorithms to control the climate in a virtual greenhouse. Algorithms had to automatically determine set points for ventilation, heating, lighting, etc. in order to grow a virtual lettuce crop and maximize the net profit.”

As the winning team, Team ‘Koala’ will be in the physical growing phase of the Autonomous Greenhouse Challenge that starts in early 2022. Participating teams will each have a WUR greenhouse compartment to grow real lettuce completely autonomously.

Team ‘Koala’ achieved a total of 85 points out of a possible 90 points, coming in first in the machine learning challenge and sixth in the computer vision challenge. The team built an algorithm that realized a virtual net profit of €8.68 per m2. “In addition, their computer vision algorithm was able to recognize lettuce images with a high accuracy (total error=0.094) and estimated the correct growth parameters of lettuce plants,” says the release.

The next qualifying phase of the Autonomous Greenhouse Challenge will take place in November, in the form of a 24-hour Hackathon. The best five teams will continue in the competition towards the final challenge of growing lettuce in the WUR facility, along with Team ‘Koala.’

Both new and existing teams will be able to register for the next qualifying phase starting July 16.

The competition is now in its third year. Tran also led the winning team in the first year of the competition in his previous capacity at Microsoft. “It’s challenging to win an international competition against strong teams and companies around the world,” says Tran. “I particularly like this new challenge because of the new automation elements such as computer vision and dynamic spacing. We are moving beyond autonomous climate control and toward fully autonomous greenhouses.”

The concept of a completely autonomous greenhouse may seem futuristic, but Tran says it’s already a reality. “The idea of the autonomous greenhouse challenge is very real. We would not have our startup if it’s not real. We have existing customers doing trials with us. Many growers and many growing companies are believing in the technology.”

With files from: WUR