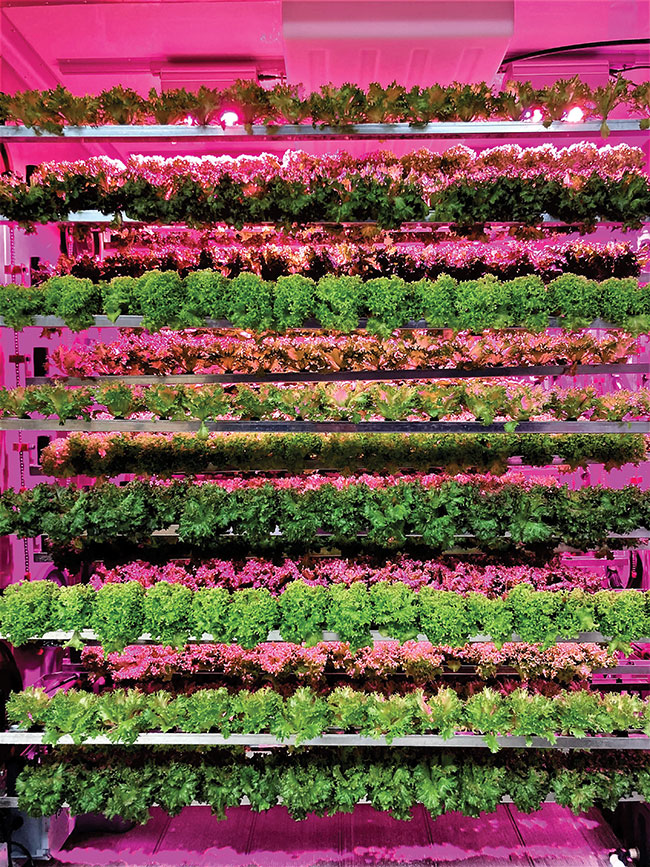 A variety of configurations allow the CubicFarm growing modules to be customized to the crop. This image shows spring greens in production. Source: CubicFarm Systems Corp.

Set against a backdrop of snow-capped mountains, what looks like a Quonset hut sits amid blueberry fields in the Vancouver suburb of Pitt Meadows flanked by what appears to be a dozen shipping containers.

But the arched structure is the command centre of a new kind of controlled-environment agriculture system, one that could make plant production more efficient and enhance local food security.

Known as CubicFarm modules, the indoor food-grade stainless steel growing chambers that flank the central work area can produce 6,240 heads of lettuce onsite every three weeks, as well as other produce, herbs, and microgreens. A conveyor cycles more than 250 growing trays along a patented undulating path in as little as 90 minutes, receiving light and nutrient-rich water along the way. Each module consumes approximately 100 L of water per day, and any excess is collected, filtered and recirculated.

Once the crop is mature, workers in the central production area harvest them and restock the trays for another growing cycle.

“You can stand at the front and do all of your harvesting and planting. You don’t waste any space,” says Dave Dinesen, CEO of CubicFarm Systems Corp., the Langley, B.C.-based company that developed the technology. “It’s just far more efficient on a cubic foot basis than really any other system, and much more efficient from a labour standpoint. It’s been estimated we’re about a quarter of the labour of a comparable rack-and-stack static system.”

Unlike some of the converted shipping containers used by small-scale growers, the commercial-scale technology is enclosed within the module to maximize production space without the need for aisles. The modules are custom-built in China and shipped out to buyers who, with the assistance of CubicFarms’ installation team, can have them up and running in short order just like other forms of modular construction.

“What this allows us to do is manufacture centrally and then ship them, nearly complete, on any train, any truck, any boat. They arrive at the farm and then the team will finish installation onsite,” he says.

Tray configuration and watering can be matched to crop, with reforestation companies, hemp growers and cut flower producers all showing interest in the modules.

“We do have some configurations where you can take a plant up to 15 inches high, but most configurations are ideally for plants 10 inches or shorter,” explains Dinesen.

While the modules make food production more efficient, they’re also used to speed up plant propagation for field growers of cannabis, hemp and other crops.

“They’re accelerating their field crop, and they’re able to grade what they’re planting. It just makes the whole system much more efficient,” he says.

The use for propagation is no surprise, as the systems have their roots in the history of the Benne family of Langley. The family patriarch, Jack Benne, built a successful plant propagation business that supplied growers across North America. Together with his son Leo, who still holds a minority stake in the company, the family applied its expertise to develop controlled growing environments that let growers raise their own plants.

“All of that history and growing experience has gone into what we’re doing, and now we’re innovating to take our technologies to the next level,” says Dinesen.

The strongest demand is in systems for food production, particularly of salad greens and herbs. The company recently set up a brokerage and consulting division, CubicFarms Garden, to handle product sales on behalf of growers. Distribution is under the ALLWays Local brand, and identifies the individual grower of that local produce

The CubicFarm modules can handle high-volume, quick growth of local produce, including leafy greens, as well as propagation of a wide variety of crops. “One module will propagate almost 120,000 plants every two to three weeks,” says Dinesen. “There’s just an enormous number of crops that the system can grow.”

“It’s designed to complement a greenhouse type of environment, as opposed to competing with it,” he says. “You aren’t going to grow cucumbers, peppers, tomatoes in a CubicFarm, but you can certainly germinate or propagate those crops alongside, for efficiency. Or you can then diversify and add more cultivars to your growing program.”

The modules also provide an expansion option for land-constrained greenhouses that want to boost capacity within limited space.

“If a greenhouse operator wanted to improve their propagation rates and free up more space for growing, this is a very inexpensive and reliable way to move propagation adjacent to the greenhouse so you can free up floor space,” he says. “The automation is a key component of this because there’s no need for aisles where people can walk around or the need for scissor lifts to reach a higher level.”

The concept has attracted significant financial backing. The Bennes were known to investors through Bevo Agro Inc., a public company that formed cannabis producer Zenabis Global Inc. and now continues to operate as Bevo Farms Ltd., a privately held company under Langley Propagation and Floral Company Ltd. CubicFarms was established as a subsidiary of Bevo Farms in 2015. The family’s track record, combined with early produce sales to major supermarkets that demonstrated the system’s capabilities, helped it attract over $41 million in financing from investors including Ospraie Ag Science LLC of New York, which now holds a 21 per cent stake in CubicFarms. U.S. multilevel marketing company Nu Skin Enterprises Inc., a provider of skin care products, invested $10 million in spring 2019 and holds a seven per cent stake.

A listing on the TSX Venture exchange has extended CubicFarms’ access to capital as it ramps up. Sales in the latest fiscal year totalled $5.1 million, but it has received deposits on $31 million worth of modules. The company had sold 67 modules by the end of 2020.

CubicFarms has not developed case studies for greenhouses and could not yet provide data regarding the value of the systems in those growing conditions, but some growers see the concept as a major advantage.

David Pfaeffli, co-owner with his wife Alyssa of Swiss Leaf Farms Ltd. in Busby, Alta. saw the machines as an ideal way to return to farming after a career in construction management. Raised on a dairy farm, he now has 14 growing chambers in a 10,000-square-foot enclosed production facility, of which CubicFarms is a partial investor. The facility sits on an acre and a half of land at the corner of a quarter section of prairie, the rest of which is rented out.

“I wanted to get back to farming, but on 160 acres you can’t do much farming anymore, so the indoor ag space seemed like a really interesting place,” Pfaeffli says. “[CubicFarms is] the best system for that. It hit all those checkpoints as far as being able to grow onsite, indoors, with our climate and being scalable as well.”

Two weeks’ training with CubicFarms in Pitt Meadows prepared him to operate the farm, which produces salad greens and herbs for Sobeys and Safeway in Western Canada, with the help of ongoing technical support. Use of a farm management app allows him to monitor the farm from his mobile phone.

With the addition of marketing support for their produce, Pfaeffli is keen to grow the business.“We’re selling out week after week and we’re looking to expand,” he says.

The opportunities for local production also attracted Mark and Lesley van Deursen of Green Lion Farms Ltd. in Armstrong, B.C., who had their 16 machines up and running by late March. Two are for propagation and 14 are for production. The chambers will produce salad greens, microgreens and herbs, a diversification of their existing 80-acre organic forage operation. 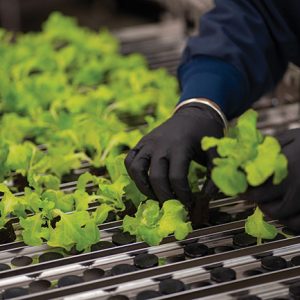 A conveyor cycles more than 250 growing trays along an undulating path through the CubicFarm growing module in as little as 90 minutes.photo credit: Swiss Leaf Farms. 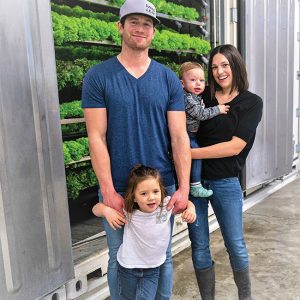 David and Alyssa Pfaeffli were early adopters of the CubicFarm growing system, which has resulted in a thriving business with five full-time employees.

Green Lion Farms’ produce will be distributed through CubicFarms’ contracts with local grocery stores and food distribution centres under the ALLWays Local brand.

“You don’t need acres and acres like a lot of greenhouses,” Lesley van Deursen says.

While the set-up takes planning, operation is simple.

“There’s the preliminary stages of setting up your building, and all of the very specific requirements of where things need to be located and how the container needs to be set up,” she says. “It’s plug-and-play once all of that is taken care of.”

Leslie Van Deursen adds that the level of support was key. “Our entire experience would have been vastly different had we not had their support and knowledge along the way.”

CubicFarms has orders for more than 175 modules averaging $175,000 apiece, though prices for individual modules vary, as each one is custom-built. Sales in North America are laying a foundation for international opportunities.

CubicFarms holds a 20 per cent stake in FutureLife Produce of Surrey, a venture backed by Jerry Li, president and CEO of Canada High-Tech Investment Group Co. Ltd., which invests in agritech and helps North American companies develop markets in China. FutureLife was among the first BC growers to export blueberries to China in 2018, and has contracted 100 modules for its farm in Surrey and 10 for a Richmond location to serve local foodservice markets.

Aright Greentech Canada Ltd. has also agreed to purchase 14 production systems to supply produce to retail outlets in Abbotsford and Chilliwack. The initial production site in Abbotsford, set to be in operation by August 2021, will see how CubicFarms and Aright’s affiliate Aright India partner can assess the production capabilities of CubicFarms’ modules for a number of crop types. This could see Aright purchase additional systems for use in India.