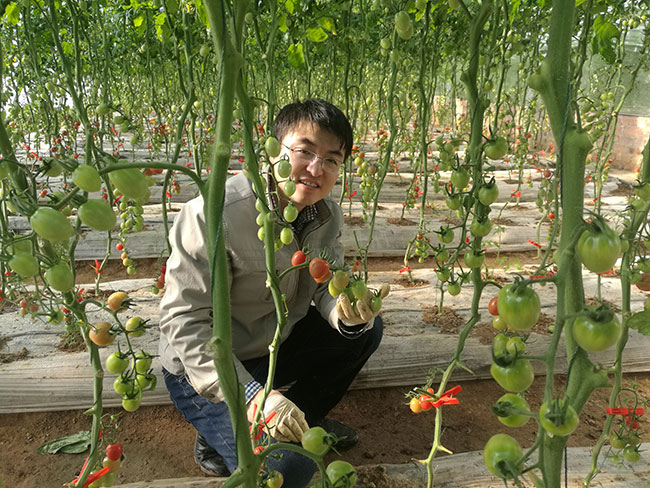 Dong Jianyi prefers to grow heritage varieties of tomatoes, the kind of tomatoes you wouldn’t find in grocery stores. Tomatoes so sweet they make your taste buds sing. So sweet they remind you of the tomatoes your grandparents used to grow thirty, forty, fifty years ago. Tomatoes with fine, thin skins, not ideal for transporting over long distances, but rather, cultivated for maximum sweetness, pleasure, and nourishing communities in central and southern Alberta.

At Freshpal Farms in Olds, Alberta, Dong and his family grow tomatoes, peppers, cucumbers, spinach, corn, and sunflowers. They experiment with planting rare, niche varieties of radishes – “green and long – like a small arm!” – and big, thick leafed spinach, along with a type of hardy Chinese cabbage that’s well suited to survive winter’s harsh bite on the Canadian prairies.

“The vegetables I grow are very natural, they’re organic, clean, and healthy,” Dong enthuses. “And they taste so good!”

Passive solar technology works to trap and store solar energy, which is then released slowly to heat up the greenhouse. This way, produce can thrive year-round – even in one of the coldest growing zones on the planet.

From geology to agriculture

Dong’s story is an extraordinary one, in part, because he didn’t grow up on a farm, or even study agriculture in university. In fact, he never even planned on becoming a farmer.

Dong grew up in the city of Tangshan, China, located 150 kilometres northeast of Beijing. It never occurred to Dong that he might one day grow food for a living. The young man who “never even stepped foot on a farm,” studied to become a geologist and went on to work in natural resource extraction. In late 2014, Dong’s work as a geologist brought him to Canada to work for a large oil and gas company.

“The work and pay were good,” recalls Dong. “But it felt like nothing belonged to me, and that the company could let me go at any time.”

With increasing uncertainty and volatility in the oil and gas sector, Dong made the decision to transition into a new career. He wanted his work to be secure and sustainable. Dong yearned to do something that would cultivate a sense of longevity and creative ownership.

The geologist recognized a different kind of opportunity on the Albertan prairies.

“The first thing that came to me was farming,” says Dong. “Where I lived in China, there were so many passive solar greenhouses. But in Canada, I didn’t see any on the commercial scale.”

In 2017, Dong and his wife invested in an acreage outside Olds, and gradually – over the course of a year – built a passive solar greenhouse measuring over 100 metres long and 10.5 metres wide with a height of 6 metres. 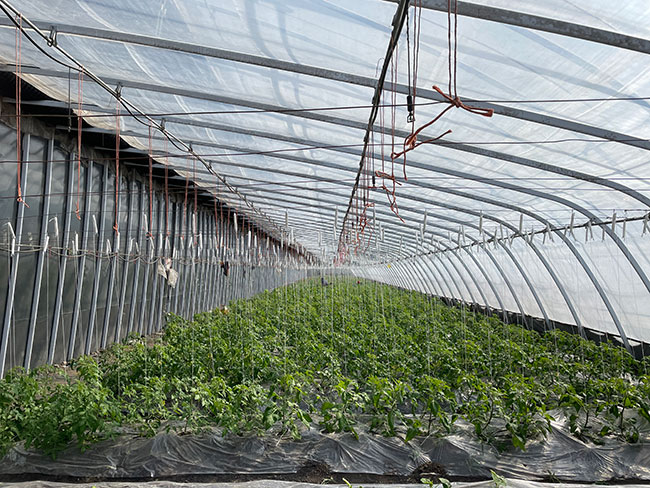 Dong chose to build a double-layer greenhouse using a steel pipe frame with polycover. A 1/3-inch-thick insulated blanket covers the first layer. To receive sunlight during the day, Dong uses an electric motor to roll up the insulated blanket. At night the blanket rolls down again, trapping the heat inside.

On the north side of the greenhouse, he constructed a 1/2-metre thick clay wall.

“Clay holds the heat,” explains Dong. “The sunlight heats the back wall to a very high temperature – about 30 degrees. During the night, the clay releases the heat gradually.”

The solar greenhouse is large enough for Dong to operate a small tractor. He sows directly into the soil and relies on organic methods: using compost and manure to enrich the soil, and avoiding the use of pesticides, herbicides, or fungicides.

“Without research, I wouldn’t have dared to start my business,” recalls Dong. “There’s existing technologies and business models, which are successful. I wanted to copy this success.”

The Shan Dong province is famous for their concentration of passive solar greenhouses. Farmers rely on the sun to grow food, despite cold temperatures, and avoid the high costs associated with heating.

“Farmers in China don’t have much land,” explains Dong. “Every family has a small piece of land, which they have to make a living on. Many farmers build solar greenhouses to grow vegetables. The operational costs of conventional greenhouses are too high. But passive greenhouses allow farmers to grow through the winters without heating, so they can keep vegetable prices low.”

Growing in the face of a changing climate

Over the winter, Jianyi cultivated vegetables right up until January, when temperatures plummeted to forty below zero. He explains that the crops did remarkably well through the winter until the tenth day of extreme cold. In the summer months, he uses a seeding cloth to block out sunlight in the greenhouse, which maintains a temperature of 25 to 32 degrees Celsius. 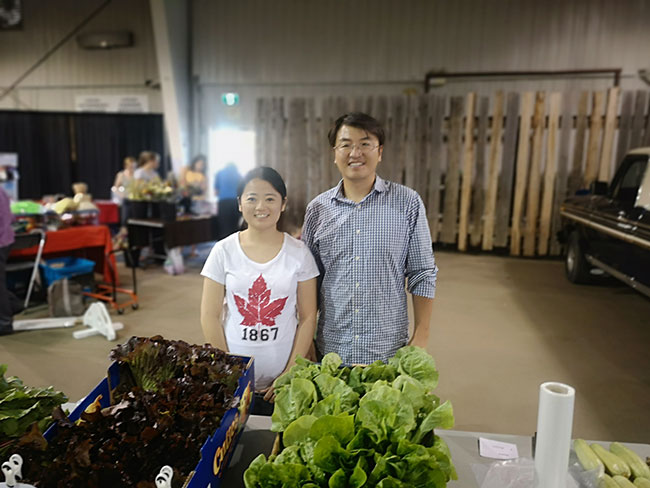 Dong Jianyi and his wife, Ting Wang, invested in an acreage outside Olds, Alta.

In addition to the vegetables in his greenhouse, Dong planted field vegetables in the summer. But his crops fared poorly due to the below average temperatures and heavy precipitation.

“We need heat to grow vegetables,” he says, “But the weather was extremely cool.” He believes that growing in the greenhouse provides greater environmental control and certainty over the outcome of crops.

Dong is sharply aware of climate change and the increasing shift in weather patterns. His previous experiences as a geologist involved working in mountainous regions where glaciers have retreated rapidly over the past fifty years – with some disappearing entirely. But he insists that becoming a farmer made him pay greater attention to weather patterns and the climate.

“There’s no normal anymore. There’s only extreme,” says Dong. “Extreme is normal. We have to get used to [growing food] in extreme conditions.”

He also believes that farmers can play a role in mitigating the effects of climate change. The use of passive solar greenhouse technology is a win-win for the farmer and the environment.

“In the agricultural industry, we must reduce our energy consumption as much as possible. The passive solar greenhouse is a good idea,” Dong says. “I only use a little bit of electricity to pull down my insulating blanket. It costs me about $1/day. The environmental impact is close to zero.”

Dong’s goal has been to double his production area from one to two acres. In November 2021, he finished building a second solar greenhouse of the same dimensions. He also wants to experiment with extending the growing season by using simple high tunnel insulation for field crops.

Dong works closely with educators at Olds College, along with central Alberta-based group Rural Routes to Climate Solutions, to create learning opportunities for other Albertans interested in the passive solar greenhouse model. His passive greenhouse at Freshpal Farms has served as a demonstration farm for other farmers to come and learn about the possibility of investing in passive solar technology.

“Many people want to change their careers,” he says. “Some people want to buy a piece of land and start a new life. I want to tell these people that, in the beginning, it can be difficult – but if you hang on, in a couple of years, you can have a
better life.”

As new farmers, Dong and his family have fallen in love with the slower paced rural lifestyle in Olds. He enjoys farming and the ability to make decisions on his land, to experiment with innovation, and to feel in control of his livelihood. Dong also points to the support and kindness from neighbours and the wider community in the Olds area.

“I think I need to thank the slowing down of the oil and gas industry,” says Dong. “It gave me the chance to start something that belongs to myself. Here, I can control my life.”

Trina Moyles is the author of Women Who Dig: Farming, Feminism, and the Fight to Feed the World. She lives in northern Alberta.

This article was updated and republished with permission from Rural Routes to Climate Solutions.