‘We have to work collectively,’ says OFVGA chair, ‘especially if we’re going to interact effectively with government.’ 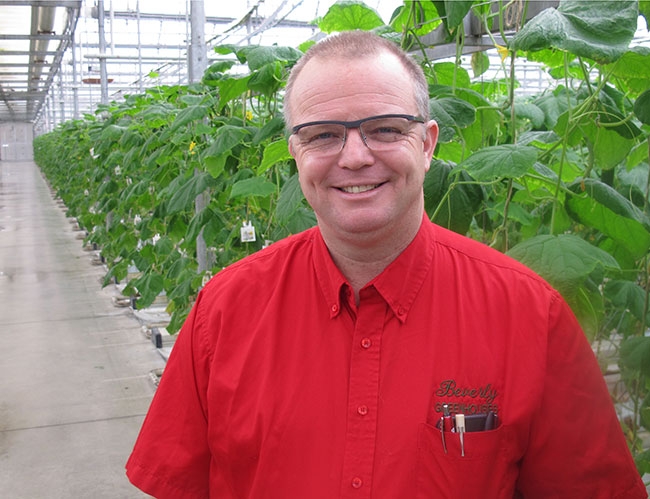 Veteran Ontario cucumber grower Jan VanderHout is up for any challenge in the greenhouse or farm association boardroom.

He grew up in the Hamilton-area family business his grandfather established almost 60 years ago and has been working full time in the business for 33 years.

VanderHout co-owns the business – Beverly Greenhouses – with his brother, Dale. It’s one of the largest greenhouse cucumber operations in the province. At the time of our visit last winter, they had 20 acres in production with plans for another seven acres. They also have two acres of propagation.

VanderHout has been an enthusiastic volunteer on a number of key horticulture associations in the province. Last year he was elected chairman of the Ontario Fruit & Vegetable Growers Association (OFVGA), the first greenhouse grower so honoured. We talked to him shortly after he became chairman.

VOLUNTEERING IS IN HIS GENES
The volunteerism comes easily to him – it’s in his genes. “Our family has always been involved on associations working for the common good of the industry,” he explains.

“If all we do is sit back and wait to see what happens, we’re probably not going to be happy with the outcome. As individuals we really can’t do it alone. We have to work collectively, especially if we’re going to interact effectively with government.

“And that’s become a large part of what organizations are doing. We’re talking to government about a variety of issues, such as cap and trade, electricity rates, and about opportunities to improve the infrastructure in the areas that are supporting horticultural operations, to name only a few.”

The greenhouse industry has changed a great deal over the years. For starters, the family was growing in the soil back then, and environmental control primarily consisted of manually operated vents, fans and thermostats.

HUMBLE START FOR THE FARM
It was his grandfather, also named Jan, who started the business in the early 1960s. He started with a quarter-acre of tomatoes grown in a wooden-frame greenhouse with glass. That original greenhouse is an example of how technology-driven the industry has always been.

“That’s been the evolution of the greenhouse business. At every step of the way, each greenhouse was state of the art, the leading technology of the day.

“The industry is always changing. Growers are always looking for ways to improve productivity. As margins shrink, there’s great importance on being competitive with your production systems, to get the optimal results with the technology you’re using. And that’s going to be even more critical as we go forward.”

DEDICATION TO INNOVATION
Beverly Greenhouses is big on innovation, the most recent investment involving a state-of-the-art packing line installed three years ago. Manual labour is only used to pack the boxes – everything else is handled by a series of whirring machines that take the crates off the carts, tip the crates, grade the cucumbers, and then automatically and efficiently palletize the skid loads of boxes.

Within only a few hours of harvesting the cucumbers are ready for retail.

They can now pack 50 per cent more with the same number of people. “With 11 people, we can do about 1600 dozen an hour, whereas before it would have been just over 1000 dozen.”

DECISION TIME: DIVERSIFY OR SPECIALIZE
After starting off with tomatoes, the family did eventually add cucumbers and both crops were grown for a number of years.

However, there comes a point where you have to make a decision on whether to continue to be diversified – with different packing systems and growing expertise for each crop – or instead focus on what you do best. The family chose the latter and they have been growing cucumbers exclusively for 38 years.

Growing cucumbers year-round in southwestern Ontario has its share of challenges, particularly with reduced light levels in December and January. “We can make it warm and we can give the plants all the fertilizer they need, but it will all come down to sunlight,” says VanderHout, commenting on winter yields.

He and Dale have studied supplemental lighting, but it would be expensive in capital costs and electricity, and they’re not sure the market prices in the winter would be high enough to justify the expenditures. “You have to be cautious and you really have to do your homework to be sure you’re going to get a sufficient return on your investment. We’re not there yet, but we’re watching things closely. I would never say never,” he says with a grin.

PHOSPHORUS REDUCTION: GREENHOUSE GROWERS ARE LEADING THE WAY IN AGRICULTURE
VanderHout has assumed the OFVGA chairmanship at a particularly busy time for the organization. Among major issues is phosphorus reduction by agriculture.

The greenhouse sector is already on the leading edge of phosphorus output reduction processes thanks to the widespread use of recirculating nutrient systems by growers.

Other issues include electricity rates and the impact of cap-and-trade requirements. The latter will be a major headache for many greenhouse growers, with some facing costs of $6200 per acre – about $80,000 for the average greenhouse of 13 acres. That’s a heavy hit to the bottom line.

The province has been told repeatedly of the industry’s concerns, but unlike similar scenarios in British Columbia and Alberta, where those provinces have offered rebates of up to 80 per cent, Queen’s Park is not yet showing much sympathy to the plight of Ontario growers.

“They’ve been stonewalling us up to now,” says VanderHout. “It’s definitely not because we haven’t been asking them about it.”

Some provincial officials have suggested greenhouses could possibly look to geothermal and solar sources to meet their heating needs. “But that’s not going to happen,” says VanderHout. “Nobody in the world is doing that on a commercial scale. The net zero greenhouse studies look good on paper, but we’re years away from commercial application.”

The greenhouse sector in Canada is already at the leading edge of energy management, utilizing the latest computer programs, double poly facilities, insulated walls and energy curtains, as a few examples. “We’re willing to innovate and we’re willing to invest, but we can only invest in what is available.”

Cap and trade would seriously hinder the ability of growers to compete in markets – export and domestic.

LABOUR CHALLENGES
VanderHout says horticulture relies on labour for the many manual jobs around the farm, such as harvesting and packing. The off-shore labour program has been an essential resource for growers in supplementing their local supply of workers.

Having more young people identify agriculture as a career choice is important. “We’re not seeing enough young people going through school and saying they want to work on a farm. They’re more interested in office work and computer careers. We have to get the message to them that farming offers many great and rewarding careers.”

And that sentiment comes from personal experience. He loves his work and the career choice he made so many years ago.

“I love the diversity of greenhouse work, there are so many interesting things we see every day. I like the challenges this industry brings. That’s not to say I like facing problems, but I like fixing problems.

“There’s always a new challenge, whether it’s a marketing issue or a production issue or disease or pest issue, or a mechanical issue when something breaks down. It makes the job exciting and challenging. What’s it going to be today?

“I often start my day with a list of things I want to accomplish and there are times I barely get started on it because of all the things that come up,” he says with a chuckle.

“That’s also why I enjoy my work on the boards. Working with problems is what they do all day, and I want to be part of working on the solution.”