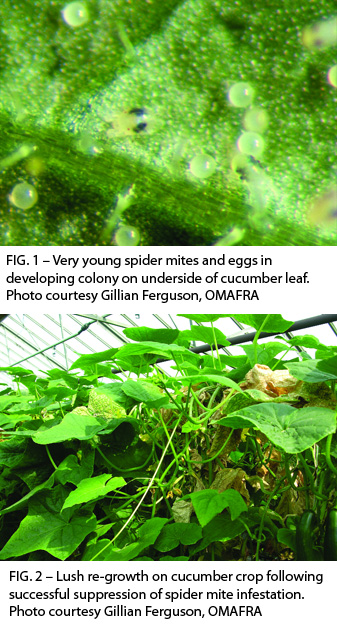 No matter how many new miticides are registered, it inevitably develops resistance to them, if growers rely on them solely for managing spider mites. It’s no wonder that greenhouse cucumber growers are increasingly turning to biological control as their first line of defence, using pesticides only when absolutely necessary. Because cucumbers are such good hosts for spider mites, and because of the warm greenhouse temperatures used for growing this crop, spider mites multiply very quickly on cucumbers.

Rapid multiplication of the spider mite, combined with a host plant that has a large surface area that continuously expands at a rapid rate, make biological control of spider mites in cucumbers a challenge.

Trials carried out in co-operation with cucumber growers strongly indicate factors contributing to successful biological control of spider mites may be distilled down to two key factors – meticulous monitoring and generous release of predators, with emphasis on the word “generous.”

IMPORTANCE OF MONITORING FOR SPIDER MITES
n a) Early Detection
Meticulous inspection of the crop is absolutely necessary for early detection of spider mite infestations, even if a preventive release of predators, such as Amblyseius californicus, has been made. The youngest spider mite colonies are often without the characteristic yellow stippling. Thus, by the time symptomatic yellow stipples are visible, the spider mite colony is well underway with lots of immatures and eggs
(Fig. 1). The time that elapses between the sighting of infested leaves and delivery of biocontrol agents allows for further development of the colony, depending on temperature. The life cycle of spider mites at 32 and 21ºC takes 3.5 and 14.5 days, respectively. At normal greenhouse temperatures, the life cycle probably takes about seven days. So, early detection is needed to minimize the time within which the spider mites can reproduce unchecked.

Earliest detection of spider mite colonies can only be achieved by weekly inspection of all rows in the greenhouse. In scouting for pests such as whiteflies and thrips, it is not essential to check every row because yellow sticky cards can be used to monitor populations by counting winged adults caught on the cards. Spider mites, by contrast, have no wings at any stage of development and so they spread within a greenhouse either by crawling to adjacent plants when leaves are touching, attaching to clothing of passersby, or via the silken threads that they produce.

Targeted Placement of Predators
Careful inspection of all levels of the crop canopy is required to facilitate placement of predators. Assuming that a predator such as Phytoseiulus persimilis is being released on plants with feeding damage, it is important to know where all infested leaves are located so that when the biocontrols are delivered, predators can be placed on all leaves with damage symptoms, and as well, on surrounding plants, given the absence of clearly visible feeding symptoms in the youngest colonies.

IMPORTANCE OF GENEROUS USE OF PREDATORS
At any time of the year, timeliness of release and adequacy of numbers of predators released are very important for successful suppression of spider mite, but it is even more critical during late spring and summer when spider mite populations increase at a tremendously rapid rate. Trials in commercial operations indicate that relatively low inoculative releases of between six and 12 predators per plant can suppress populations for short periods. But, inevitably, “hot spots” appear sooner or later. The degree to which hot spots develop may be influenced by the numbers of predators released in the early stages.
In one commercial crop during 2006, early releases of three A. californicus per plant for two consecutive weeks, followed by three P. persimilis per plant for three consecutive weeks were made. The abundance of spider mites developing in hot spots allowed both predators to proliferate but this was not sufficient to prevent expansion of the hot spot. An intervention with Floramite™ soon after the third application of P.

persimilis resulted in a dramatic reduction of spider mite numbers. Observations of severe hot spots at one week following the Floramite application revealed averages of up to eight P. persimilis per leaf with some leaves having as many as 45 on one leaf. Numbers of A. californicus were on average lower, with slightly more than one per leaf, with up to about five on one leaf. Populations of P. persimilis were relatively high for up to two weeks following the Floramite application. Thereafter, they were not observed, likely due to starvation. Amblyseius californicus, on the other hand, persisted for at least six weeks after the Floramite application. The net result of several predator releases and one miticide intervention was complete suppression of spider mite populations in the hot spots and lots of new clean growth within a couple of weeks (Fig. 2).

Although the end result of the above trial produced positive results, perhaps earlier releases of higher numbers of predators could have reduced the degree of infestation in the hot spots. In another earlier trial during early 2004, blanket releases of A. californicus were made at about 4/m2 with plants in areas with more obvious symptoms receiving over 30 A. californicus per plant. Three weeks after the release of A. californicus, continued expansion of the infested areas of infestation resulted in three releases of P. persimilis in the hot spot areas, starting at approximately 100 per plant during the first week, followed by about 50 per plant in the week immediately following the first release. The third and final release of about 25 per plant was made at two weeks following the second release to ensure that the spider mite population was completely suppressed. Although damage was incurred in the hot spots of this trial, it was not to the same extent as the first trial described.

During a summer trial this past year, suppression was much more difficult to attain. In this trial, the total number of predators released in some hot spots was estimated at about 30 per plant. Where other hot spots received many more predators, suppression was satisfactory.

IN SUMMARY
Careful monitoring of cucumber crops for earliest signs of spider mite infestation is needed for timely and accurate placement of predators. Not only are timing and placement of releases important, but so also is adequacy of numbers of predators. As a rule of thumb, it is better to err on the side of “too much” than “too little.” Following these general guidelines should result in success, but this assumes that delivered predators are healthy, active, and are in the required numbers; that there is no – or minimal – delay in the distribution of predators following their delivery; that there are no harmful residues on plants; and finally, that growers have the commitment and determination to succeed in this challenge. n

Gillian Ferguson is the greenhouse vegetable IPM specialist with the Ontario Ministry of Agriculture, Food and Rural Affairs in Harrow.
• 519-738-1258, or gillian.ferguson@ontario.ca