Fungicide resistance pressures.  Often the risk very much depends on the chemical class to which it belongs 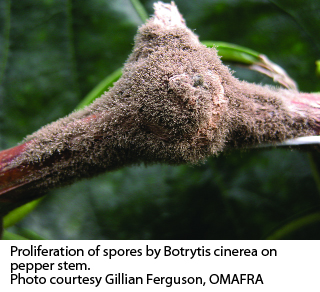 Producers of greenhouse crops can exert control, to a large extent, over their growing environment to minimize disease incidence. However, such control is not perfect, and there is often the need to intervene with control products. Depending on how such interventions are managed, fungi can develop resistance to products applied to manage the diseases they cause in greenhouse crops. To provide guidelines for managing fungicide resistance, The Fungicide Resistance Action Committee (FRAC), an inter-company organization, was established in the early 1980s. Publications by this committee indicate that some chemical classes and certain pathogens are more prone to resistance problems than others.

FUNGICIDE TYPES MOST PRONE TO RESISTANCE
Experience with fungicide resistance indicates that the risk of resistance developing very much depends on the chemical class to which it belongs. For example, fungicides based on copper, or those belonging to a class called dithiocarbamates, e.g., mancozeb, have never been known to encounter any resistance even after decades of use. By contrast, other classes such as benzimidazoles, e.g., benomyl (Benlate™), phenylamides, e.g., metalaxyl (Ridomil™), and dicarboximides, e.g., iprodione (Rovral™), have all encountered serious resistance in most of their target organisms within 2-10 years after commercial introduction.

SYSTEMIC FUNGICIDES
Generally, fungicides that are systemic, i.e., translocate within the plant and therefore persist, and that target a specific biochemical site (e.g., inhibition of cell division) versus multiple sites within the biology of the fungus, have been associated with resistance problems. Researchers believe that a single site that forms the basis of the fungicidal action of a product can be more easily overcome because only one mutation is needed.

By contrast, if the fungicide targets several sites within the fungus, several changes are needed simultaneously, and it is much more difficult to achieve several mutations at the same time than it is for one. Single site resistance is characteristic of fungicides such as benzimidazoles, phenylamides and dicarboximides, as mentioned above, and appear to be also characteristic of many modern fungicides. Repeated use of single site, persistent types of fungicides lead to reduction of susceptible forms of the fungus, and to an increase in resistant ones.

Note that there are exceptions to the general rule of systemic properties being correlated with ease of resistance development, as in the case of iprodione (Rovral™), which is not systemic. Table 1 lists fungicides used in greenhouse vegetable production and their associated risk of developing resistance according to FRAC.

FUNGI MOST PRONE TO RESISTANCE
Some characteristics of a fungus that favour development of resistance include the following:
1. Short disease cycle – the shorter the life cycle, the more frequently there might be need for fungicide applications and therefore, the faster the buildup of resistance.

3. Isolation of populations – the more isolated and protected the crop, the less the chances of dilution with sensitive forms, or loss of resistant ones.

4. Good dispersal over time and space.

Some pathogens are considered to be more inclined towards developing resistance than others, and scientists have classified them as high, medium and low risk. Generally, a high-risk pathogen is one in which resistance is demonstrated after only a few years of product use. Pathogen risk is considered medium to high only if resistance is reported in commercial situations for more than one fungicide class.

MANAGEMENT STRATEGIES
Some strategies recommended by FRAC for managing the development of resistance to fungicides are as follows:

a. Do not use the product in isolation, i.e., fungicides should be either applied as a mixture with one or more fungicides of a different type, or in rotation with different types. Use of both mixtures and rotations can only delay, but not prevent, the buildup of resistant strains.

b. Restrict the number of treatments per season, and apply only when necessary.

d. Avoid eradicant use, i.e., it may be best to apply products when disease levels are still low to reduce the opportunity for selection of resistant strains.

e. Practise integrated disease management. This refers to the use of all types of measures including resistant varieties, biological control agents, appropriate hygiene practices, removal and proper disposal of diseased plants or plant parts, and manipulating growing conditions to avoid establishment of pathogens.

In summary, rapidity of resistance development is associated with high reproductive capacity of the fungus, use of highly effective and persistent action of fungicides, sole use of any specific fungicides, and prolific pathogens. To combat fungicide resistance, growers need to continue reliance on as diverse a range of strategies as possible in order to minimize the development of resistance, and thereby extend the useful life of the products available to the industry.

Gillian Ferguson is the greenhouse vegetable IPM specialist with the Ontario Ministry of Agriculture, Food and Rural Affairs in Harrow.• 519-738-1258, or gillian.ferguson@ontario.ca