Thrips accounts for more than 25 per cent of insect pest management costs in Ontario’s floriculture industry. WFT is especially difficult and expensive to control because many of its life stages are hidden in the plant foliage. 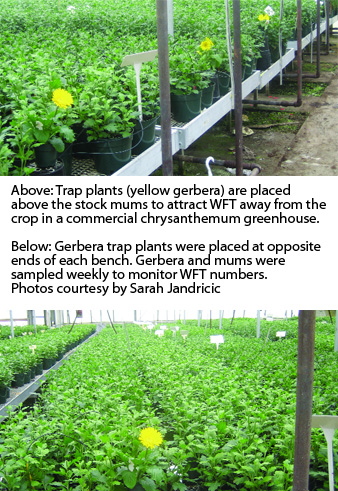 WFT is especially difficult and expensive to control because many of its life stages are hidden in the plant foliage.

Using trap plants as a new tool in the IPM arsenal is currently attracting a lot of attention. Trap plants are defined as plants that are more attractive to pests than the crop and concentrate the pest population in a localized site away from the crop where they can be controlled more effectively. The greenhouse is a good place to use trap plants because it is an enclosed, controlled environment where pest attacks are often predictable.

In the April 2005 and February 2006 issues of Greenhouse Canada, Graeme Murphy, Mike Short and Ann Marie Cooper described their experiences with tomatoes and eggplants as trap/banker plants for the control of whiteflies in poinsettia.

Chrysanthemums are also a good crop for the trap plant technique.

Flowering plants (e.g. chrysanthemum or gerbera) can potentially be used as trap plants in chrysanthemum production when the crop is in the non-flowering stage, as research has shown that WFT adults preferentially fly toward and land on flowering mums, and that thrips populations do not increase very much on vegetative mums alone.

In order to make this trap plant system as effective as possible, two experiments were conducted at the Agriculture and Agri-Food Canada Research Centre in Harrow, Ontario. First, the attractiveness of flowering chrysanthemum as compared to the vegetative, bud and crack-bud stages of chrysanthemum was determined at three different distances. Then the effectiveness of flowering chrysanthemum as trap plants was tested for thrips that were already present on the crop (resident thrips) and thrips that were released outside the crop (migrating thrips).

Eco Habitat Agri Services conducted a commercial greenhouse trial where they tested the effectiveness of flowering gerbera as a trap plant in stock chrysanthemums. 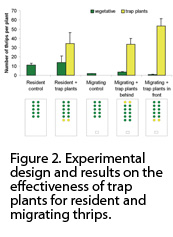 INFLUENCE OF CROP STAGE AND TRAP PLANT DISTANCE
Greenhouse trials conducted at the Greenhouse and Processing Crops Research Centre found that flowering chrysanthemum plants (cv. Miramar) were more attractive than either the vegetative, budding or cracking stages from 4 to 12 m from the release point for the thrips (Figure 1).

Eighty-nine to 97 per cent of the recaptured thrips were collected on the flowering plants compared to on the vegetative, bud or crack bud stage at all distances.

RESIDENT VERSUS MIGRATING THRIPS
In this experiment, the crop consisted of two rows of five vegetative chrysanthemum plants (cultivar Chesapeake) per row. Adult female thrips were either deposited directly on the crop (resident thrips) or released from a platform 4 m away from the plants (migrating thrips). Two trap plants (flowering chrysanthemum, var Chesapeake) were placed in front or behind the crop, slightly raised above the crop canopy. There were two control crops without trap plants (one with resident thrips and one with migrating thrips).

INVESTIGATING GERBERA AS A TRAP PLANT IN A COMMERCIAL GREENHOUSE
Long-term trap plant effects, including damage reduction and oviposition preference of female thrips, are not known. Thus, Eco Habitat Agri Services conducted a long-term commercial greenhouse trial at Kralt Greenhouses (Millgrove, ON) in 2005 in stock chrysanthemums. Two compartments were used: one acted as a control (i.e. containing stock mums only), and the other was the treatment compartment that contained the gerbera trap plants as well as stock mums. Each compartment consisted of four benches containing four rows of plants per bench, with approximately 400 plants per bench.

In the treatment compartment, yellow gerbera (eight plants in total) were placed facing the vents at the opposite ends of each bench. Gerbera were placed on inverted pots to raise them to the same level as the stock mums. Gerbera plants were replaced approximately every two weeks to ensure flowers were always present. To monitor adult WFT populations in the compartments, 16 randomly selected mum plants per bench were inspected weekly, along with all gerbera. 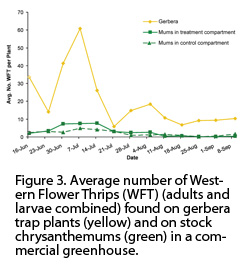 The yellow gerbera used in this experiment were shown to be highly attractive to WFT. Upwards of an average of 60 WFT/gerbera plant could be found, while WFT numbers on the stock mums were always less than 10 WFT/plant (Figure 3). WFT numbers were higher on gerbera than the mums in either compartment on every date except July 22, when all gerbera flowers were accidentally allowed to die. This peaked on July 7, when WFT were eight times higher on the gerbera than on the mums in the same compartment.

EFFECTIVENESS OF TRAP PLANTS FOR WFT CONTROL
In conclusion, the results of these studies show that flowering chrysanthemums or gerbera have potential as trap plants in potted chrysanthemum before flowering. Trap plants work best for attracting migrating thrips. Therefore, placement of trap plants is important. Invasion of commercial greenhouses by thrips is usually due to either infested nursery transplants or the movement of adults through open vents. As a result, trap plants should be used to intercept incoming thrips from vents or doorways or between flowering and non-flowering crops. In addition, the prompt removal of flowering plants from the greenhouse or a wider separation between flowering and non-flowering plants should greatly reduce thrips outbreaks.