Try new pot sizes and a number of plant combinations for continued success. 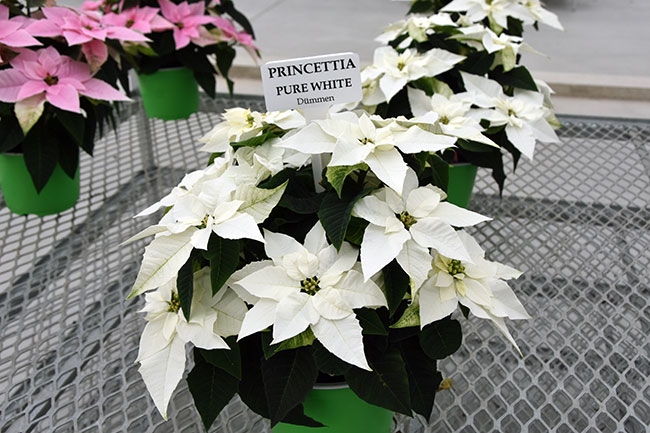 The 2017 poinsettia season was much better than even the top sales we saw in 2016. This past year marks three years in a row where poinsettia production, sales and consumer satisfaction has improved. Sales were better for the growers in general, but not great for all retailers – depending on the product sizes, packaging, displays and sales timing. And consumer satisfaction depends on which product they ended up with.

Sales and the market: Last year featured a slow start for sales compared to other years, but the season finished strong. It featured great weather for sales and shipping with no snow or frozen loads or blizzards to keep shoppers away.

The slow start was only for outlets that raced to put poinsettias on their shelves before Remembrance Day. Poinsettias are for Christmas and any push to try to sell them early is a recipe for serious sales shrinkage. Early products that do not move start to look bad, so when consumers were ready to buy, all they could find were sickly poinsettias or, at best, plants that were far from fresh. Timing is everything and no, we do not need snow to sell poinsettias. Some 70 per cent of total sales are in regions that never get snow.

About 65 per cent of the crop grown in Ontario was sold in Ontario, compared to 75 per cent last year and 95 per cent in 2015. The low dollar has helped with exports.

Growers and buyers establish their programs several months in advance of the season, so last minute or spot buying is almost nonexistent. Buyers for large chains have to have consistent suppliers for more than one product. That is why spot buying is the last choice for them. A buyer managing 100-plus stores does not want to deal with several suppliers. This reduces possible price cutting late in the season because growers and buyers will know what they are getting into right at the start of growing the crop.

A long overdue realization from growers is that the cost of shipping is up by 30 per cent over the last few years. They’re focusing on stores within their regions. Similarly, buyers want to work with suppliers close to their stores.

Calculating costs should include every aspect of growing and selling the crop. There was not much time in 2017 to negotiate price increases to account for rising wages, but that should change for the coming season.

The demand for larger pot and plant sizes last year was less than normal – all pot sizes were completely sold out except the 8” pot size. Consumers like smaller poinsettias for their price point and the size of living quarters. It’s also true that the size of the new varieties in a 6” pot is much fuller with many more blooms that can easy compete with the 8” pot size.

The new sizes for successful production that give consumers a better chance to succeed in having a longer lasting plant are as follows: 2”, 5” and 7” pots should have a single plants per pot, while containers of 10”, 11”, 12” or 13” need three plants.

I know it is hard to change growing the old traditional sizes, but by working with your buyer and advertising the benefits, you will be ahead of the curve in providing a much better product. A few growers tried these new pot sizes and number of plant combinations and were very successful.

Different varieties require different production schedules for different sizes. Following these sizes is a good thing because that is when the plants are used to their maximum potential at the most economical cost. What is more important is that it will give the consumer a better chance of keeping the plants for much longer time.

Production: Most stock producers are doing a better job every year providing quality, fairly pest-free cuttings. The whitefly battle was almost negligible the past two poinsettia seasons, whether growers used biologicals or chemicals. There were no signs of Lewis or spider mites, though many growers are treating preventively for mite control.

The most effective control seems to be a combination of biologicals at the beginning and chemicals at the end of the crop. However, if the goal is for chemical-free greenhouses, we’ll need biological producers to come up with beneficial predators that can clean up the last of the whiteflies. We used to have Eretmocerus mundus as a predator that could do the job but they stopped producing it because it is not allowed in the states and is not easy to produce. I know of one biological company that is going to produce it, but availability will be restricted to those growers using the company’s total biological program for other pests.
Last season was the best ever for rooting poinsettia cuttings. The cuttings arrived on time and were from much healthier stock plants. The biggest improvement is with the improved skills of the propagators who covered every little detail to come up with the best procedures to have healthy, strongly rooted cuttings – especially from the rooting stations. In addition to all of this the excellent fall weather helped in having the best poinsettia crop ever. The crop ended up:

There were negligible disease pressures, except for the few operations that had a Fusarium fungus that was identified later on in the production cycle. For the first time, a few poinsettia plantings got infected with Fusarium. This is strange because the same lots of cuttings were planted in different locations; one lot got the fungus and others did not. It is not really clear what caused the problem, but it is important to watch for:

VARIETIES IN THE SPOTLIGHT
Few new poinsettia varieties are going to be in production for 2018. Trial the new varieties to decide if you should add them to your product line, and if you do, remember to drop your least desirable variety.

Varieties that are good for 5” pots are not necessarily good for 10” containers, or at least you need to modify the production schedule drastically to use the same variety for every size. Read the variety specs and try it in the new sizes.

Red poinsettias are at least 93 per cent of the total colours, with four per cent white, two per cent are pink, and the rest are in the miscellaneous category.

Regardless of which variety you grow, don’t overfill the pot with planting media. It should be just below the pot rim – not flush with the rim. This gives retailers and homeowners a reservoir to be able to water the plants effectively.

Two seasons ago a study group of growers and educators met once a month starting in June to discuss production issues. The main focus has been on whitefly control. Next season, we are going to do the same thing but with more topics.

COMMON PROBLEMS
Insects: Whitefly is the major pest in poinsettia. The greater use of targeted biological control, cleaner stock cuttings and the dip treatment of cuttings before sticking have combined to keep the problem under control the past few years. Infestations can be brought in from other plants from the outside that you are storing for the winter.

Diseases: Diseases were no issue last season. This was largely due to the good weather, great cultivars and by growers paying closer attention to cultural practices. There were no problems at all – even without the use of any fungicides, biological or chemical. The exceptions were those greenhouses where Fusarium was a problem.

PHYSIOLOGICAL DISORDERS
Among my customers, I noticed heat delay in couple spots because of heat valve malfunctioning. At another location, a single light bulb over a walkway kept a 50-foot circle of plants green for a time; however the problem was corrected in time and the crop was shipped just before Christmas!