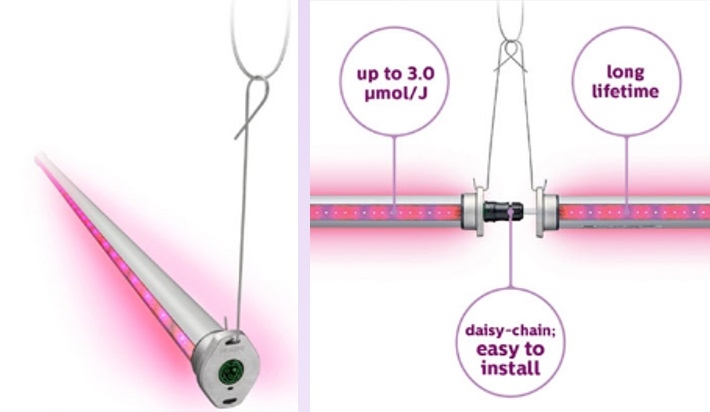 This interlighting system is designed for placement between plants, delivering light inside the canopies of high-wire tomatoes, cucumbers and peppers. It uses bi-directional or sideways-facing LEDs, so growers can direct light to parts of the plant that matter most.

To simplify installation, the system has a plug and play connector and flexible cable connections.

“It has been very well received by growers in Europe since being introduced to European market at the IPM show last year,” said Ron DeKok, Business Development Director Horticulture at Philips Lighting, “… it offers a higher light intensity compared to the previous Interlighting module and it’s much easier to install.”

The system could also translate into higher yields.

“The very high light output of 220 μmol/s and resulting high efficacy of 2.8 μmol/J will give us exactly what we need to increase our yield,” said Kris van Haute co-owner of Tomaline in Belgium. “The system comes as either a 2 meter or 2.5 meter version allowing us to tailor it to our specific situation and create a uniform light distribution right until the end of the row.”

To find out more, visit www.philips.com/horti