How was the 2018 poinsettia season? Not bad. Here’s a recap of pests and diseases, new varieties trialled with and without blackout curtains, as well as tips for 2019 production. 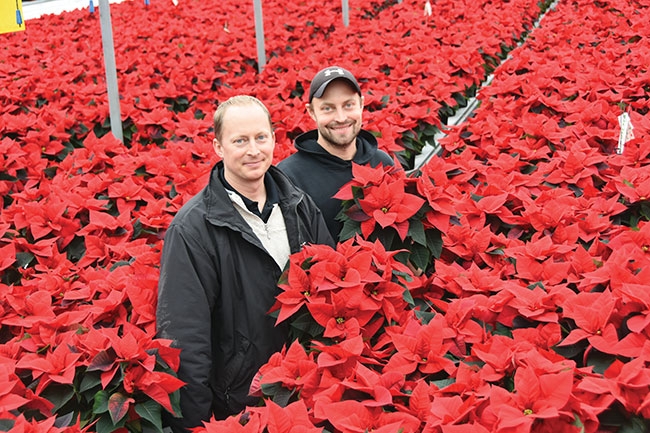 This is the first time in 12 years that I have been called to see if any growers have poinsettias for sale. I had to look hard to find some that fit the requirements. It was great that production quantities were matching, or were slightly under sales.

Sales and market
This year had great weather for poinsettia sales and shipping. Light snow, no frozen loads, and no blizzards to keep shoppers away. The slow start was only for outlets who put out poinsettias before Remembrance Day. As I’ve mentioned in previous years, poinsettias are for Christmas, and any push to try selling them early is a recipe for sales shrinkage. Early products that hit stores, but do not move, start to look bad. When the consumer is ready to buy, all they find are poinsettia that are dead or far from fresh. Timing is everything, and no, we do not need snow to sell poinsettias. 70 per cent of the poinsettias grown are sold in regions that never get snow.

75 per cent of the poinsettia crop that was grown in Ontario was sold in Ontario this past year. The low Canadian dollar helped move a higher percentage. As in past years, because growers and buyers establish their programs six to 12 months ahead, last-minute or spot buying is almost nonexistent. Buyers for large chains need to have consistent suppliers for more than one product. That is why spot buying is the last choice for buyers. A buyer managing over 100 stores does not want to deal with too many suppliers. This is positive because pre-arranged programs will prevent price cutting, and both grower and buyer will know what they are getting into right from the start.

The cost of shipping has gone up in the last few years by 30 per cent even with low fuel costs. Labour is also up, along with input costs of plant material because of shipping and the low Canadian dollar. All plant material is sold in US dollars and shipped from the States, so for a Canadian grower who sells their product in Canada, their cost per 6” is up by a minimum of 50 cents, not including the increase in delivery costs. This triggered cooperation between growers to grow product for stores closer to their area, and buyers to find suppliers close to their stores. Calculating costs does and should include every aspect of growing and selling the crop. I do not know of any growers who grow poinsettias as a hobby, without wanting to make some profit. Cooperation between the grower, broker and retailer is a win-win situation for every party, and at the same time, creates a product that provides value to the consumer.

Pot sizing
There are relatively newer sizes for more successful production, and they give consumers a better chance at having longer-lasting plants. Pot sizes of 2”, 5” or 7” should have one plant per pot, while 10” pots should have three plants each.

Too many cuttings per pot makes an inferior product for the consumer. Because the plant is crowded and the ratio of roots to soil is too high, that shrinks the shelf life of the poinsettia or any other plant in store and at home.

The consumer appetite is for smaller poinsettias, not only for the price point, but also the size of living quarters. The largest optimum pot size is 10” with only three cuttings, which can be placed into a 12” pot for looks, and is more practical for growing, shipping, shelf life and most importantly, the consumer.

Upgrading the plants with some holiday picks and ornaments, and as long as it is not overdone, will increase the plant’s value without hurting the plants.

The size of new varieties in a 6” pot is much larger and has many more blooms, which makes it necessary to use a 7” pot. This could be sold at a higher price than the 6” since the 7” holds more volume and is much better for the consumer.

I know it is hard to change from the old traditional sizes, but by working with your buyer and advertising the benefits, you will be ahead of the curve in providing a much better product.

With different poinsettia varieties, different production schedules are needed for different sizes. By following these sizes, plants are produced for maximum potential at the most economical cost.

Production
Most of the stock producers are doing a better job every year, with good quality cuttings and being fairly pest-free depending on the source. Whiteflies were almost negligible in some greenhouses while it was a losing battle in others. The main difference was the source of the cutting material and whether biologicals or chemicals were used. The hot, dry summer also helped to limit the field whitefly, and even the tomato fields had much fewer whiteflies than normal. But this same weather enhanced the flourishing of spider and Lewis mites, especially with greenhouses that were using biological control. Normally, mites are not a serious problem in poinsettia production and predators that control whiteflies do not work on spider mites. But all in all, a much better year for pests.

The most effective control seems to be a combination of biologicals at the beginning, then finishing with chemicals. But if the quest is for chemical-free greenhouses, biological producers have to come up with beneficial predators that can clean the last of the whiteflies at a reasonable cost.

This was the best and worst year ever for rooting poinsettia cuttings, depending on the condition of the cuttings that arrived at the growers’. Good cuttings that arrived on time and of much healthier stock plants were more successful. Also, the much improved skill of detail-oriented propagators came up with the best procedures for healthy, strong-rooted cuttings, especially the rooting stations.

Varieties
Few new poinsettia varieties are being produced for 2019. Repeating the same advice: try new varieties, then decide whether to include them in your program or not, and remember to drop your least desirable variety. Some varieties looked promising at the trial this past November. Over 150 varieties were tried –  some were new, while others were introduced two to four years ago but not adopted much in greenhouse production programs. Anyone interested in the list and photos of poinsettia varieties from the trials, send me an email and we will get them to you. Varieties that are good for 5” are not necessarily good for 10”, or at least you need to modify the production schedule drastically to use the same variety for every size. Read the variety specs and try them in the newer sizes.

Red poinsettias make up at least 93 per cent of the total colours, with 4 per cent white, 2 per cent pink and 1 per cent miscellaneous.

Regardless of which variety you grow, make sure that when filling pots with planting media, the media is not flush with the pot rim. This is to give the stores and home owners a reservoir to be able to water the plants more effectively.

Problems
Insects – The whitefly is the main pest in poinsettia, but with increased use of targeted biological control, other insects are popping up like echino thrips and spider mites. And for the first time, we have seen mealy bugs on a couple cultivars that came with the cuttings. Greenhouses with cuttings from clean stock producers ended up with minimal whitefly problems. The problem was severe for growers with stock from a producer that was not clean, independent of whether biocontrol, chemical control or a hybrid was used by the greenhouse grower.

Diseases – With great weather, great cultivars and attention paid to cultural practices, diseases were not an issue this year. There were no problems at all, even without the use of any fungicides, biological or chemical.

The only exception was that some cuttings got infected with Erwinia at propagation time, but this was due to shipment delays or heating during shipping.

Physiological disorders – Heat delays in a couple spots because of heat valve malfunctioning, and another location where one light bulb in a side walk kept a 50-foot circle green, but was shipped just before Christmas.