A guide to distinguishing the pepper weevil from its doppelgangers. 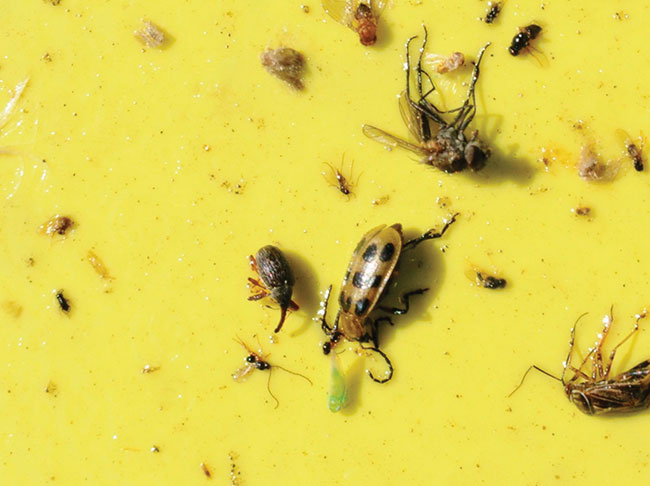 The pepper weevil, Anthonomus eugenii, is an economically damaging pest that can be found throughout all major pepper growing regions in North America. This pest can catch producers off-guard. Reproducing at exponential rates, it is incredibly laborious to manage and causes significant yield loss.

Management options are limited with few insecticides currently registered in Canada. Recent work has identified effective reduced-risk and biorational products to support new registrations and label expansions. However, available insecticides have limited efficacy largely due to the concealed immature life-stages, which develop inside the buds and pepper fruit, that go practically unscathed following an insecticide application. For best results, it is critical to detect pepper weevil early in the initial infestation period, then respond promptly with diligent scouting, removal of infested fruit and buds, and use insecticides when necessary. One of the most reliable tools to assist in early detection are pheromone baited traps. These traps include large yellow sticky cards and lures containing compounds found in naturally occurring aggregation pheromones. These aggregation pheromones are released by adult male pepper weevils, telling both male and female pepper weevils “this is where the party’s at – there’s food, there’s mates, come on over”.

One challenge encountered when monitoring these traps is that other equally small weevil species are often observed, and sometimes well before any pepper weevils ever appear. The conundrum, then, is that failure to properly identify and promptly respond to the presence of pepper weevil could rapidly lead to a difficult-to-manage pepper weevil population. In contrast, misidentifying a non-pepper weevil as one, could lead producers to spend more time and money on a higher-than-normal rate of crop scouting, infested fruit removal, and the unnecessary application of insecticides. For these reasons, the accurate identification of weevil species is essential to making informed and timely pest management decisions.

It can’t be that hard… 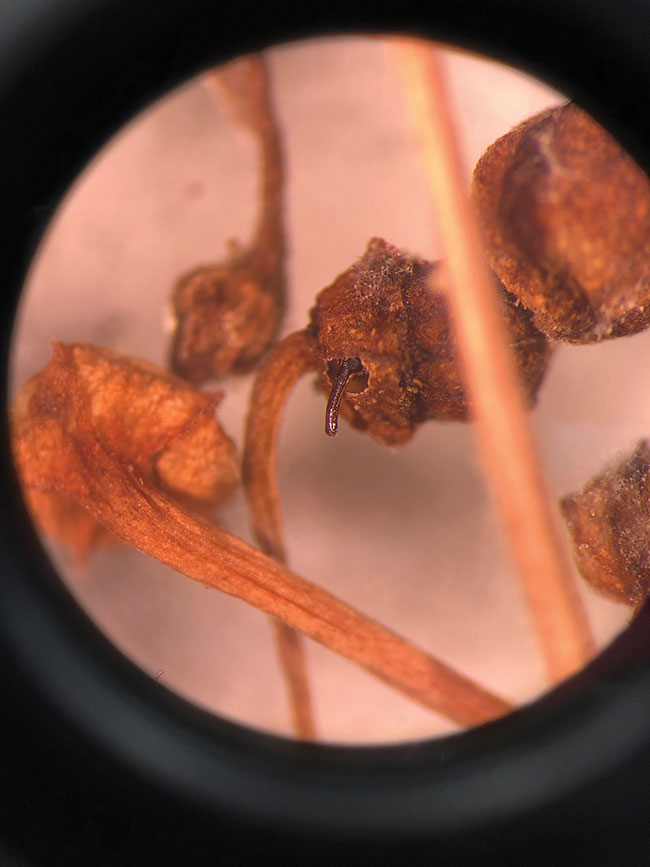 To give you an idea of the diversity of weevils in Ontario and Canada, we look to the 2013 Checklist of Beetles (Coleoptera) of Canada and Alaska (Bousquet et al., 2013). According to this source, there are currently 960 described species within the superfamily Curculionoidea (a.k.a weevils) in Canada; 480 of which are found in Ontario. Within that superfamily are the more relevant members of the family Curculionidae (a.k.a true weevils or snout beetles) of which there are 823 described species in Canada; 400 of which are found in Ontario. This family includes 37 weevil species belonging to the genus Anthonomus in Canada; 17 of which are found in Ontario. Some of these species not only closely resemble the pepper weevil, but may also respond to the same pheromones in baited traps designed to attract pepper weevil. However, in a greenhouse pepper crop, there is only one species that we really care about: the pepper weevil, Anthonomus eugenii. Because there are many similar morphological features among weevil species in general, it can be quite challenging to know just which species is stuck to your sticky trap. Essentially, we are expecting you to pick a needle out of a haystack. No big deal, right? So, how do we differentiate between pepper weevil and the hundreds of other weevil species in Ontario?

To answer these questions, the Ontario Ministry of Agriculture, Food and Rural Affairs (OMAFRA) and Agriculture and Agri-Food Canada (AAFC) initiated a collaborative effort aimed at identifying the numerous other weevil species found on pepper weevil pheromone baited traps in southwestern Ontario. This ongoing work is focused on distinguishing close relatives of the pepper weevil, and other morphologically similar weevil species to better assist IPM specialists, scouts and producers in confidently identifying the evil weevil with ease. Since 2016, thousands of weevils have been collected from traps, catalogued and their prevalence and seasonal occurrence recorded. With this information, we can help narrow down the list of suspects.

A weevil detective’s tools
To begin your detective work, it’s important to have the right tools in order to see body shapes, textures and other tiny features to help distinguish weevil species from one another. Most weevil features can be observed with a 10X hand lens or low magnification microscope. These days, digital USB microscopes or mobile phone attachments are relatively cost effective and can make it easier to take and share quality pictures of your specimens. As a bonus, this can also help build an image reference library useful for ongoing pest identification and management. Once you are set up with a suitable device, it’s then important to get familiar with morphological terminology typically used to describe insect body parts (i.e. Do you know what a femur is?). Doing so will help you work though the feature lists of described weevil species, and enable you to access a huge array of online resources that can be used to rapidly compare your specimen to other relatives. Together, these tools combined with this guide should make identification of weevils as comprehensive as possible.

Uncovering the details of the pepper weevil 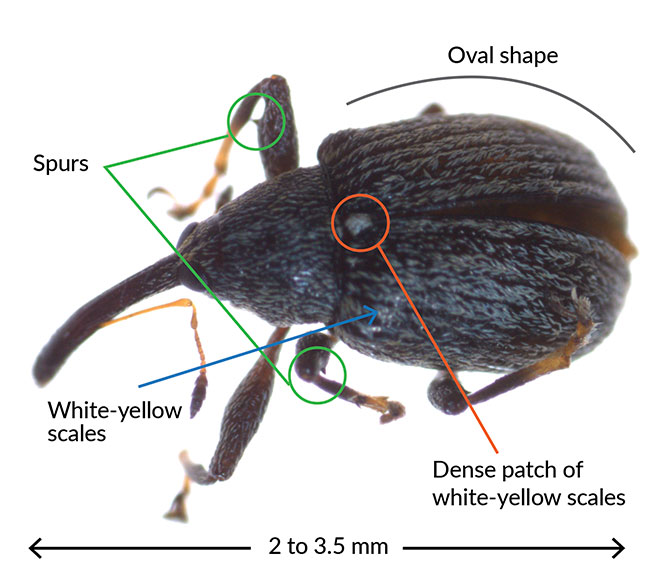 First, there are certain morphological features that can be particularly helpful for ruling out many beetle species and distinguishing between the more relevant weevils. For starters, we can begin by looking for the Muppet character, Gonzo. In other words, does your specimen have a snout? Pepper weevil and its close relatives all have a snout, which is basically the nose of the weevil and looks a bit like an elephant’s trunk. (Note: there are some weevils that don’t have snouts). Other distinguishing features specific to the pepper weevil, Anthonomus eugenii include (Fig. 3):

Despite these key features of the pepper weevil, many other weevils have similar-looking traits and it can be tough to tell some of them apart. Let’s look at features that can help us rule out these other species.

The innocent weevils (in a pepper crop)

Among the specimens we captured on pheromone baited traps, some looked wildly different from the pepper weevil, such as the beet petiole borer, Cosmobaris scolopacea (Fig. 4) or the green immigrant leaf weevil (Polydrusus formosus) (Fig. 5). Others have a striking resemblance in size and features. One further confounding factor to identification is that sometimes the glue from sticky traps can change a specimen’s appearance to the point where easily distinguished features are less obvious or entirely hidden. Therefore, it’s important to look closely at the series of features that can help rule out other weevil species as culprits. Specifically, look at size, colour, density of scales, the presence of spurs and perhaps most notably, the body shape. Ask yourself, “What is similar to the description of a pepper weevil and what is different?”

There are a few other key weevil genera that keep popping up among our collected specimens including other Anthonomus, Ceutorhynchus, and Tychius species. Some of these other species frequently appear on traps in spring and early summer as they emerge from overwintering sites and their suitable hosts are available, whereas the pepper weevil tends to be more prevalent during mid-to-late summer. However, it is possible to observe the pepper weevil at any point throughout the growing season. Below are some of the distinguishing features of commonly collected weevil species found on pepper weevil pheromone baited traps: 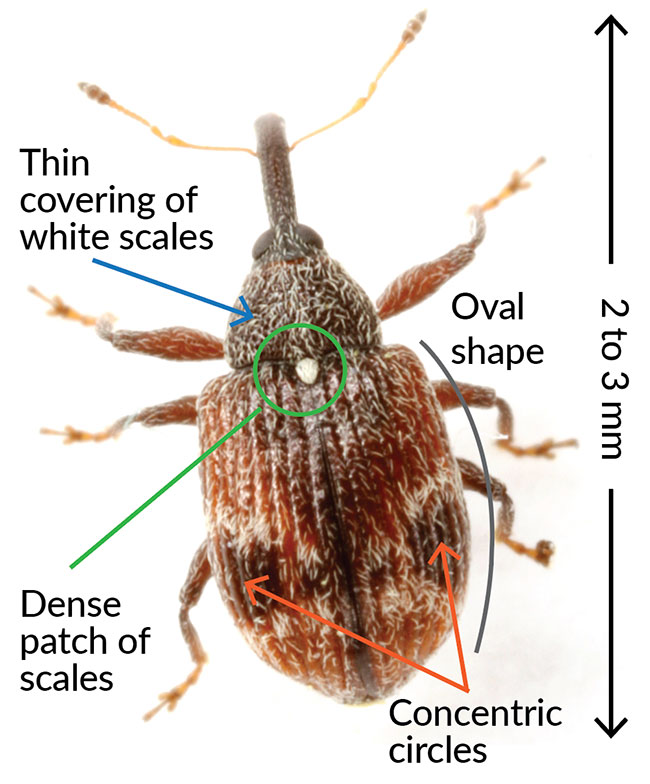 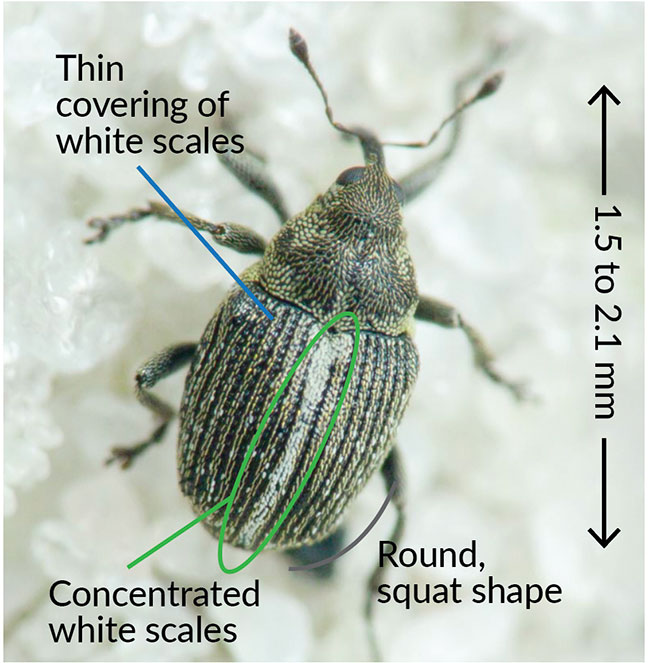 FIGURE 7.
Ceutorhynchus typhae: Note the concentrated white scales at the top of the wing covers and down the centerline, a thin covering of white scales on the body, and round, squat body shape. Photo credit: Boris Loboda. UkrBIN. 2020 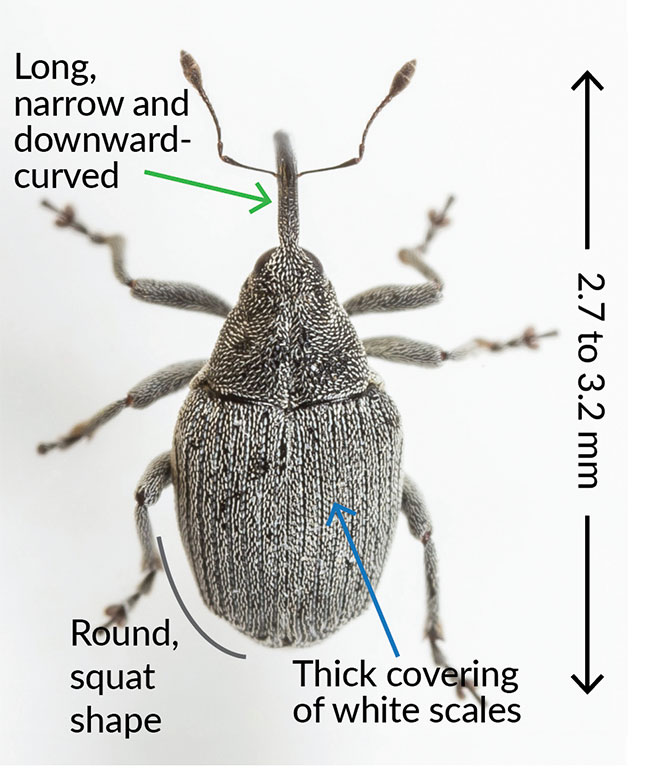 FIGURE 8.
Ceutorhynchus rapae – Cabbage weevil:
Note the snout is long, narrow and downward-curved, body appears grey due to a thick covering of white scales on the black body, and a round, squat body shape. Both photos: John Rosenfeld, BugGuide

In addition, Ceutorhynchus erysimi is also occasionally collected (photo not shown). While it has some similar characteristics to the above-mentioned Ceutorhynchus species, including a similar body shape and smaller size of approximately 1.8 to 2.7 mm length, C. erysimi can be distinguished by its black shiny body with metallic blue-green wing covers, and the virtual absence of scales. 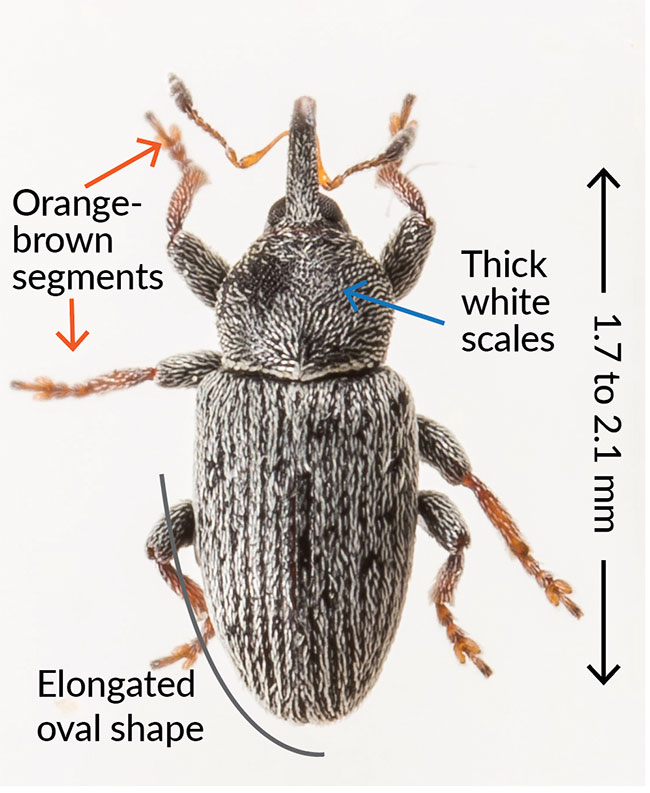 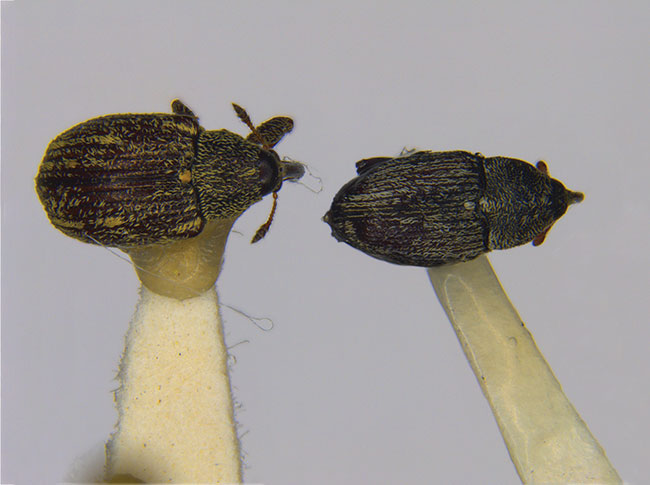 Aside from these common weevil species often found on pepper weevil pheromone baited traps, there are other weevil species in Ontario belonging to subfamily Baridinae (Fig. 11) that also share a considerable resemblance to the pepper weevil. Members of this group are incredibly difficult to identify at the species level. However, there are some key features that can be useful for identifying members of this subfamily. Males have obvious prosternal spines protruding from their heads (picture horns coming from the underside of their neck) 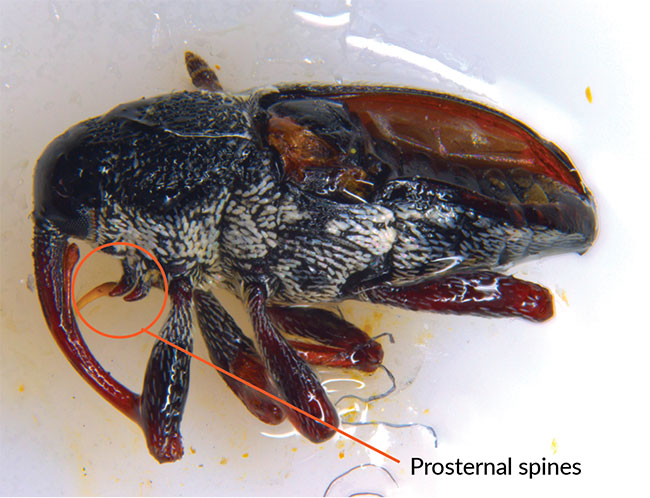 (Fig. 12) – these are used in male-to-male combat. At first glance however, the females can look remarkably like the pepper weevil. Perhaps the most important difference is the body shape – the pepper weevil has an arched back while the baridine weevils do not.

It is noteworthy that pepper weevil’s doppelgangers may be pests in other crops, but not in peppers. Ultimately, the basic information provided here can be a useful first resource for quickly weeding out the weevils that aren’t of interest to pepper producers and identifying the weevils that likely are. Although we would urge you to look for these details when first observing and distinguishing specimens yourself, when in doubt or when a specimen strongly resembles the description of a pepper weevil, it is important to reach out to your trusted IPM specialist or entomologist for confirmation. Either way, if you are a pepper producer and find a weevil on one of your traps, don’t panic until you know that your weevil is in fact evil.

Related
Is that a pepper weevil in your pheromone trap?
Ensuring nutrition for biocontrol agents
Meet the new thrips on the block
Two webinars on tomato brown rugose fruit virus set for April