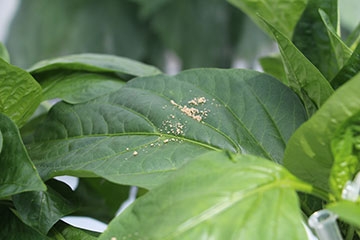 Pepper plant with eggs of the Ephestia moth (a supplemental food). Photo from: AAFC

Research scientist, Dr. Roselyne Labbé and her team at the Agriculture and Agri-Food Canada (AAFC) Harrow Research and Development Centre, have developed a more sustainable method to keep crops safe from pests.

Typically, producers invest a significant amount of their crop production costs towards purchasing and applying biological control agents to fight pests. Once they do their jobs; however, control agents tend to disappear from crops because their food source (the pest) is gone.

Labbé’s method for improving crop establishment involves using supplemental foods to help sustain the beneficial insects that eat the pests. Moreover, it improves how long beneficial agents remain on the crop and allows for a more preventative, rather than reactionary, approach to biocontrol.

“You wouldn’t get a pet and not feed it, so why would we do that for our biocontrol agents? You have to support your organisms in some way until the natural introduction of pests occurs. In addition, growers can now provide resources for beneficial organisms that won’t cause additional problems for the crop,” says Labbé.

The team worked with two specific biocontrol agents – Orius insidiosus and Dicyphus hesperus, both insects eat harmful crop pests and are native to North America. Overall, the findings confirmed that Orius was effective at combatting thrips invasions while Dicyphus worked well at supressing whitefly. In addition, both of these predators were also known to eat other pests.

These two biocontrol agents were tested because of Orius’ capacity to establish on a range of crops (including pepper, cucumber and ornamental crops) and Dicyphus’ ability to suppress pests on tomatoes, which is a particularly tricky crop for getting establishment of certain biological control agents, including Orius.

“Tomatoes are toxic or physiologically difficult for many of the good bugs to establish on, so we need better ways to support the agents that will work well. By establishing populations of generalist predators, such as Dicyphus early on, a grower can better prolong greenhouse crop protection,” says Labbé.

“Obviously, these types of foods have different values to the survival and establishment of different predator species. It was really important for us to be able to distinguish the relative values of these food types for predators frequently used in Canada, so that growers here could select the best foods with which to add value to their existing crop protection practices,” explains Labbé.

Despite some additional details to be worked out, Labbé says growers can begin to use this new tool right away. It is best to apply more nutritionally valuable foods, such as Ephestia eggs, to the crop when the predators are initially released. Then, less expensive foods such as pollen or Artemia can be used.