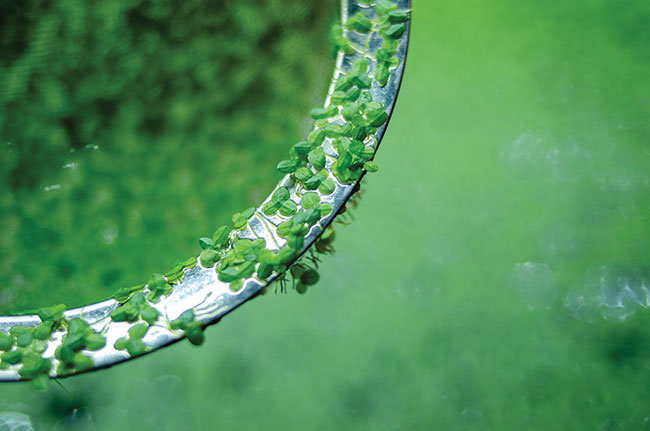 The possibilities offered by controlled environment agriculture (CEA) are many.

With the promise of high quality, high yields, and high efficiency, other non-traditional applications are looking towards this technology. When optimized, the precise environmental control and automation offered could help address issues driven by sustainability and human health.

Continuously pushing the envelope, here are a few new and unique Canadian businesses using CEA technology to do more. They run the gambit from plant-based protein and livestock feed to human health products.

Pontus is a Vancouver-based company about to begin production of a highly nutritious crop called water lentils in an organic, aquaponics setting.

Water lentils, commonly known as duckweed, are tiny plants found in nature which typically float atop of bodies of fresh water. They grow extremely quickly and contain 42 per cent protein along with Omega-3 fatty acids, antioxidants, calcium, iron, fibre, carbohydrates, and an array of micronutrients.

The company plans to automatically harvest, dry and grind the lentils into the firm’s flagship product, Pontus Protein Powder, which has an astonishing 11g of protein in every 25g of product.

Beginning in spring 2022, the company plans to produce five species of water lentils at their first 20,570 ft2 facility and on-site food science lab in Surrey B.C. Annual production of the protein powder is estimated to reach 9.6 tonnes.

As with any aquaponics system, fish waste will be metabolized by aerobic bacteria in the water into base nutrients which are then used to fertilize the plants.

The accompanying rainbow trout will also be sold and is projected to reach 10.5 tonnes per year.

Pontus plans to operate the two production systems separately for lentils and trout using its proprietary closed-loop growing system known as CEVAS (Closed Environmental Vertical Aquaponics System). The system is said to feature state-of-the-art analytics, machine learning and artificial intelligence to optimize the growth of the water lentils. 95 per cent of the water is re-circulated, and CO2 is captured and reused.

Water lentils are ready for harvest every 24 hours within the CEVAS system. Because there was no known technology available for harvesting the crop, Pontus developed the Harvesting Automated Robotic Vehicle (HARV) in partnership with Calgary-based Automation Experts.

This ‘vertical rack’ robotic system enables a robot to operate along a system of vertical and horizontal rails to complete automated tasks. These rail systems, like ones found in large warehouses all over the world, maintain the health of the crop and harvests daily, minimizing chances of contamination, as well as enabling highly efficient production. 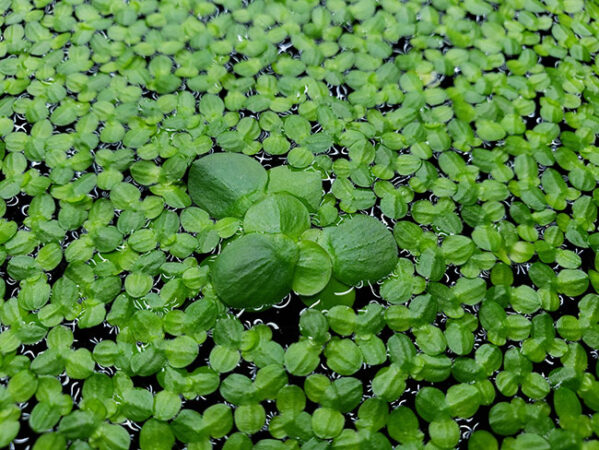 “HARV moves between our stacked beds, detecting mature lentils ready for harvest and harvesting them into a strainer basket,” explains Pontus Protein’s chief technology officer, Steve McArthur. “When it detects that its basket is full, HARV goes down and empties it. Its low profile allows for nine levels of vertical farming in our current facility, but the level number could be increased in future facilities. We developed HARV to fit our vertical farming system, which goes against the traditional way of trying to design vertical farming beds to enable some type of efficient harvest.”

The company’s protein product will first be marketed to consumers as an ingredient for smoothies, cooking, and baking, as well as to other companies as a nutraceutical food ingredient with potential health benefits and disease prevention properties. In the future, powdered and/or raw water lentils will be used in the company’s own beverages and protein bars.

For now, the potential market for trout consists of high-end restaurants, but processing into canned product could be a possibility in the future.

In late 2021, Pontus entered into a consulting agreement with Sting Organics, a B.C.-based company planning to farm stinging nettles, another highly nutritious crop with nutraceutical properties. Pontus will conduct feasibility tests on the production of the crop in its bio-secure, aquaponic and automated vertical farm system. The project also includes food product development and planning for market launch.

In aquaponics systems, microbes convert the fish waste into fertilizer which is used by the plants.

HydroGreen is a unique, fully automated indoor growing system where wheat or barley seed is continually sprouted and harvested every six days to produce nutritious livestock feed. The division is based in South Dakota and owned by CubicFarm Systems of Langley, B.C.

As HydroGreen’s president Dan Schmidt explains, feed sources are limited in North America at the present. “Prolonged droughts are becoming more common and because beef ranchers in some areas of the world haven’t had enough feed coming from their land at various points over the last few years, they’ve had to sell cattle or face even more serious difficulties,” says Schmidt. “They’re left with the choice of selling their farms, making a big investment in another type of farming, or making a smaller investment in HydroGreen to keep their beef cattle. For dairy farmers, HydroGreen feed is a cost-effective and nutritious part of the ration.” 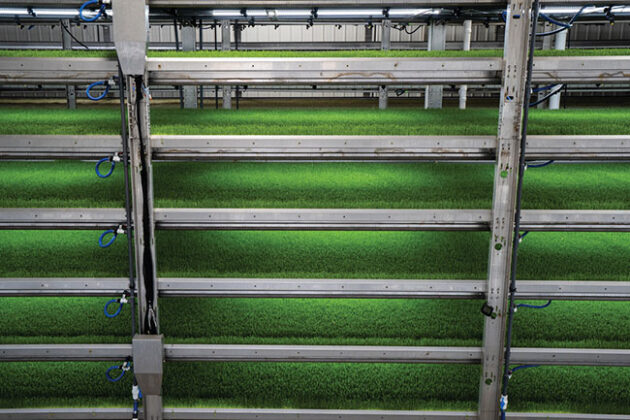 “Installation and integration with HydroGreen were easy,” says Bill Vanderkooi. In 2018, he installed the first HydroGreen system in Canada and expanded to four at the Bakerview Farm EcoDairy in Abbotsford, B.C. “[My] feed supply is consistent and reliable, every day. Beef cattle finish better and earlier, and dairy cows perform better.”

The system is technologically advanced yet very simple in terms of cultivation, with automated seeding, watering, and harvesting. No fertilizer is required. The system must be housed in an existing or newly constructed building of at least 1,500ft2 and outfitted with the appropriate plumbing and electrical infrastructure. Once ready for harvest, the sprouted wheat or barley rolls off an automated belt like a carpet and is shredded, ready to be added to the ration for dairy or beef cattle. The percentage of the ration that can be met with fresh HydroGreen feed is at least 15 per cent for dairy and about 30 per cent for beef. However, the sprouts are also suitable for other livestock categories such as poultry and goats.

To address the needs of larger cattle operations, HydroGreen has also created Automated Vertical Pastures, a vertical growing system consisting of several commercial-scale HydroGreen modules. The system is about to be piloted at Burnett’s Land & Livestock in Wyoming to provide part of their dairy cow rations. Burnett’s invested $1.5 million in a non-brokered private placement with CubicFarms and is receiving the system as part of an agreement for 12 commercial-scale modules, daily feed production supply, and includes collaborative research trials with HydroGreen.

HydroGreen recently announced $2.7 million in sales commitments in B.C. Through their certified dealer network, total sales commitments for 2022 to date total more than 100 modules, valued at over $23 million. 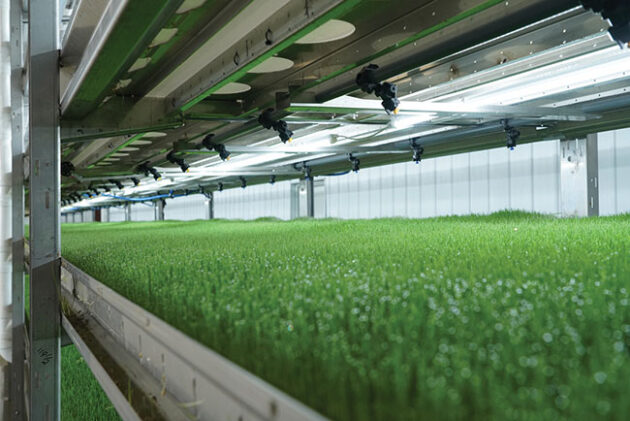 Wheat and barley are sprouted and harvested every six days to ensure continuous supply.

Surprisingly, the use of tobacco to make various pharmaceuticals is already quite advanced in Canada.

In 2020, Quebec-based vertical farm tech firm INNO-3B partnered with plant-based pharmaceutical companies PlantForm Corporation, Cape Bio Pharms and Biopterre, on a ‘pilot molecular farm’ at its 35,000 ft2 facility in St-Pacôme. The partnership enabled potential collaboration on a monoclonal antibody treatment for COVID-19, with precision greenhouse-grown tobacco as the production medium and using PlantForm’s proprietary process. The program is now being advanced in collaboration with Fiocruz, an agency of the Ministry of Health in Brazil.

PlantForm currently has small-scale facilities in Canada where vaccines are produced for early-stage testing. In Oct 2021, the company signed an agreement with Asian firm POSCO International to bring to market a vaccine for Classical Swine Fever in pigs.

“Early work on plant-made pharmaceuticals focused on field-grown crops such as corn and rice, but concerns emerged around 2002 about potential contamination of other food crops,” explains PlantForm CEO, Dr. Donald Stewart. “Tobacco is a very suitable plant for biopharming, with fast growth and genetics that are well understood. Over many years, tobacco has been engineered to produce … several pharmaceuticals. Compared to other culturing systems for biological drugs, plant-based systems are cheaper, faster and have unlimited scale-up, among other benefits.”

For its part, INNO-3B has spent years developing methods to optimize plant production. “Our turnkey closed-environment system creates optimal plant growth conditions to pharmaceutical industry standards for consistency, repeatability, traceability and both vertical and horizontal scalability, enabling maximum space optimization,” explains CEO Martin Brault. “Our unique lighting design reduces space between shelves up to three times that of other designs. We also have automated crop handling, with desired trays brought straight to a centralized workstation, all from the touch of a screen.”

COVID-19 and Flu (H1N1) vaccines are currently being produced in greenhouses in Canada by Medicago, a Canadian business who, in 2018, constructed a $245-million facility near Quebec City to hold its new headquarters, an R&D centre, a 9,000m² greenhouse and a vaccine production centre. The company made recent headlines as the World Health Organization faltered on approval of its COVID-19 vaccine due to ties with the tobacco industry.

PlantForm uses a proprietary process to grow greenhouse tobacco for the production of medicinal drugs. Contained in each plant cell, the drug is then extracted, purified and packaged. PHOTO courtesy of PlantForm