Breeding the next new variety is a complicated process, building on previous work to meet both grower and consumer demands. 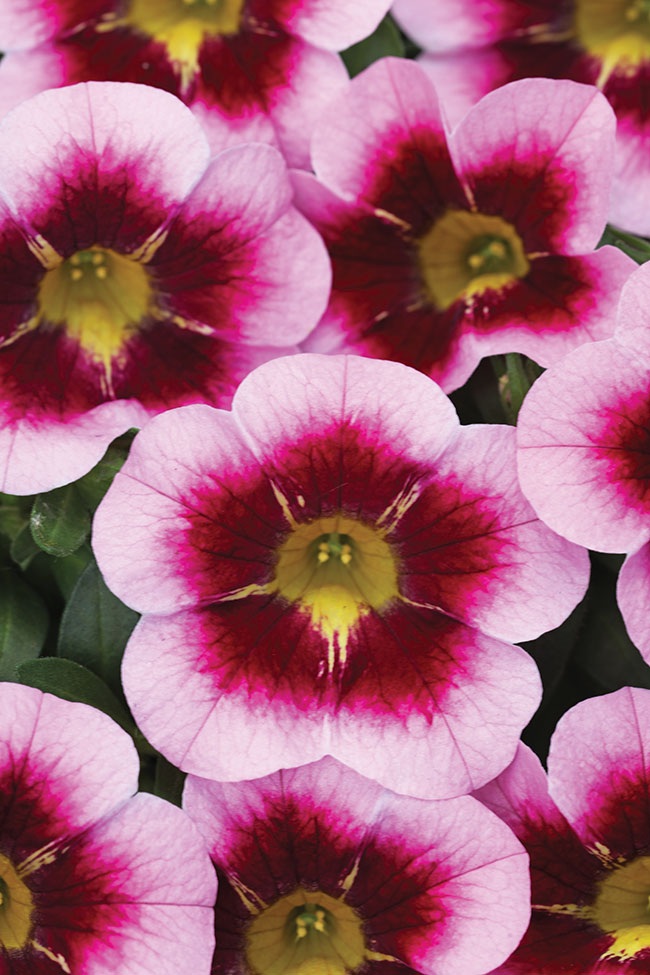 This Calibrachoa Calibasket Glamorous typifies many traits strived for when breeding: daylength neutrality, heavy flowering and branching, pH tolerance, and big flowers with a novelty pattern. all photos credited to: Westhoff

Plant breeding is a complex process, not because it is inherently difficult to cross two plants to make a new one, but because it is not a simple, one-time occurrence. On the contrary, it is one that is continually and constantly refining and improving, incrementally, over time.

If we look at a genus like Calibrachoa that has been refined and developed over the past twenty years, you can see evidence of this incremental improvement. A novel trait that makes one variety a standout eventually makes its way through an entire series, or even species. We have seen this in Calibrachoa with its reduced pH sensitivity or daylength flowering requirements. When looking at a newly bred variety and at the selected traits, it is fairly easy to see the path followed by the breeder, especially when you compare it to older varieties. But this is a view in the “rearview mirror”; you are at the end result looking back at the process. The true challenge of plant breeding is deciding which traits to select for while moving forward on that path to eventually reach a superior plant. It most likely requires the creation of several varieties along the way, each bringing an improvement over the last.

Because of its complexity, the breeding process requires a great deal of research, goal setting, and preparation to achieve the desired result. It can be split, roughly, into two halves: planning and execution. Both halves start from a broader, more general concept and end with a very narrow, more specific goal.

When planning the direction of a breeding program, the first step is to ask questions. What is the market demanding? More hanging baskets? More flowering shade items? More foliage interest items for combos? Talking to growers is the easiest way to see where the holes are in the market, and the answers we get will typically lead to several plant genera or categories that would fill those niches.

The next questions have to do with our capacity or capabilities as a breeder. Some plants have extremely specific needs that are not always in line with what we are currently doing, so it does not make sense to work on them. Petunias and Calibrachoa are similar, so most breeders that work with one, work with the other, but Caladiums and Calibrachoa would be a challenge. Once you have narrowed down the plant use and category, you can start thinking about specific traits. It can be for colour, bloom size, pattern or any one of several specific characteristics that sets your breeding apart from other breeders.

Once you have decided which plant and characteristics to develop, you need to execute your strategy. The first step is to acquire a large pool of genetically diverse individuals of the plant category you wish to work with. This can include plants collected from the wild (when legally permitted – lots of laws and regulations here), all of one species or several related species, older vintage varieties, or the newest cutting-edge varieties on the market. For example, individual plants that are selected from arid regions or microclimates tend to be more drought tolerant than other members of their species from wetter environments. If they were used as a parent, the resulting progeny may retain some of their drought tolerance. Or, if there is an older variety with a great colour, you can bring it into your breeding program to see if you can pass the trait along.

Breeders will research and select their parent plants very carefully, even trialing plants for a few seasons to pick the ones exhibiting favourable qualities. Crosses between plants are planned, and the resulting seedlings are evaluated to see if any of the progeny exhibit the desired characteristics that are similar, or superior, to the parents. Out of the thousands of seedlings that can result from these crosses when combining multiple characteristics, only a few plants are going to exhibit all or most of what was being selected for. These will be held for further evaluation or new crosses. The relatively low success rate is frustrating, but it is critical that a successful breeding program remains extremely tough when making selections.

And finally, although it may not be the most exciting type of breeding to discuss, it may be the most important: re-visiting your own established varieties and breeding improved versions. As counterintuitive as it may sound, this is the most challenging part of breeding and why companies specialize. It requires the most detailed knowledge of the varieties, an understanding of what the plants are genetically capable of, and the most critical seedling selection process. If you think about it, a new red Calibrachoa seedling is going to stand out in a greenhouse of purple seedlings, but selecting the best red out of a greenhouse full of red Calibrachoa seedlings requires a more time-consuming, careful approach. On top of that, an improved variety must encompass all the great traits that were selected for originally, plus an improved characteristic. Again, talking to growers is the easiest way to discover what characteristics are most important or need refining in a variety or series.

As time goes on, the gene pool improves overall through this gradual process. A calibrachoa from 10 years ago is unlikely to meet the same standards of today’s breeding. At this point, most Calibrachoa are tolerant of a wider pH range, flower earlier, branch better, and have larger flowers than their ancestors from a decade ago, regardless of the breeder. In ten years from now, those Calibrachoa will likely be considerably better than our current varieties. This constant push for new, improved varieties drives the competition amongst plant breeders, resulting in continually better varieties for growers to produce and home gardeners to enjoy. For any breeder, the keys to maintaining a successful breeding program should be: open lines of communication with growers and customers, continuously critiquing your current market varieties for improvements, and focusing on products that help home gardeners succeed.

Breeding through the decades

Using yellow Calibrachoa as an example, here’s how breeding can improve varietal appearance over time.

2000: Celebration Sun.
This was a colour breakthrough for Westhoff – the first yellow-blooming Calibrachoa from the program. The colour was not a pure, clear yellow and the plant was very vigorous in growth and habit.

2010/2011: Celebration Banana.
After several crossings with Celebration Sun as a parent, we were able to select a large, clear yellow bloom on a less vigorous plant, but the plant was not daylength neutral so flowering was still late. The photo illustrates the improvement in habit very clearly.

2016/2017: Calitastic Gold:
The next breakthrough for Westhoff was a compact, heavy branching series called Calitastic. Banana was used as a parent with another plant to create a yellow blooming variety, with good branching, earlier flowering, and compact growth. The yellow was a bit darker than Banana.

By comparison, 2019/2020’s release of Calibasket Yellow (bottom photo) is a bit more vigorous, with early flowering and heavy branching. You can see improvements in overall size and colour, along with the addition of a red eye.
Next steps? Breeding continues for both Calitastics and Calibaskets, aiming for larger blooms with good clear yellow.

Bart Hayes is the sales manager for Westhoff/PAC Elsner. He can be reached at bart.hayes@westflowers.de