From automation to grey plastic pots, this European trip was an eye-opener to where Canadian floriculture may be headed. 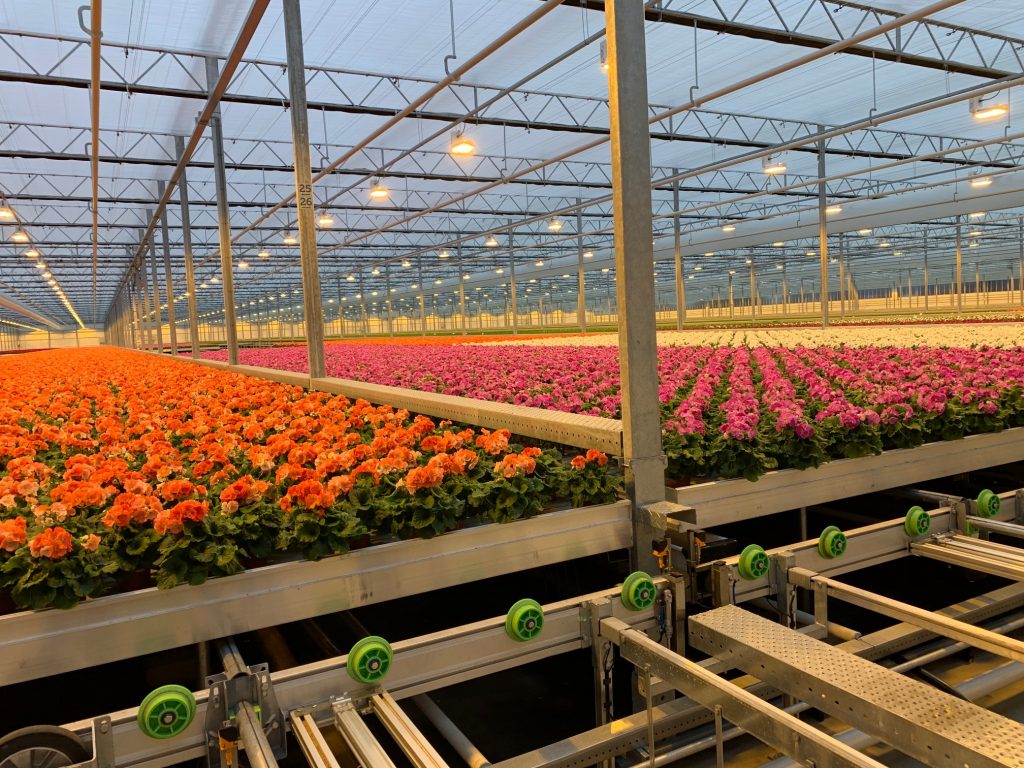 A few months ago, Dümmen Orange coordinated a trip for their North American growers to visit European potted crop producers. We had the pleasure of visiting multiple growers in Holland and Germany before heading on our way to IPM Essen. The visits included a large variety of potted crops, but our main focus was on kalanchoes, potted mums, and begonias. Along with our main plants of interest, we had much exposure to other potted crops such as dianthus, gloxinia, primula, and lilies.

A grading, staking, plant-labelling machine
The first stop of the week was Ten Have. This had to be one of the most impressive growers we would visit that week! Ten Have mainly produces Rieger begonias in 12cm, 14cm, and 17cm pots, but they also do their fair share of gloxinia. For our team, what set Ten Have apart from other growers was a self-designed planting machine that grades all plants three times before planting. A rooted liner goes into the front of the machine, which then pulls out each plug individually before sending it through a 3D Scanner. From there, the plants are grouped by small, medium, or large. The machine then plants each group in that order, stakes them, and prints a plant passport that is added to the side of each pot.

You may be asking yourself what a plant passport is. It is exactly what it sounds like. All plants in Europe need to be labeled with plant passports for tracking. Each one contains vital information on where the plant was produced, so if any problems were to come about, they could trace it back to where the plant came from.

Begonia Production at Ten Have

For pots, grey is the new black
Something we also found extremely interesting was that European growers are no longer permitted to use black plastic pots. Black plastic contains charcoal, which makes it almost impossible to break down and it cannot be recycled. The only way to dispose of black plastic is to burn or incinerate it. Growers in Europe were forced to find an alternative, which gave birth to a new grey plastic pot that can be easily recycled. We heard comments from growers explaining that they were nervous at first. They didn’t know how it would affect rooting as they were unsure if the new plastic would block the roots from 100 per cent of the light. To their surprise, the quality of the plants did not change, and production went on as per usual but now with a more sustainable future. 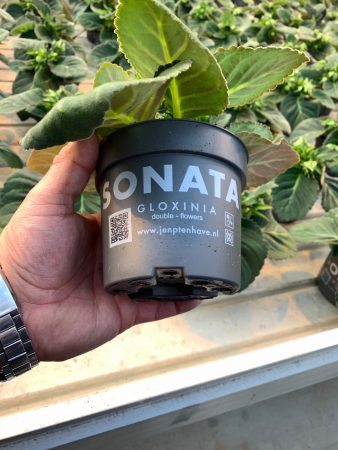 Consistent spacing from start to finish
Through the week, we had the pleasure of stopping in at many more growers where we were able to see right into their behemoth operations. A very memorable visit was to Vilosa Greenhouses. Vilosa produces kalanchoes exclusively, and of their extensive production, the majority of it is made up of Dümmen genetics. This operation produces 8cm, 10cm, and 12cm pot sizes – all kalanchoes. At Vilosa, all production starts in 18-cell tray and stays that way to finish. Final spacing is fixed for the entire lifecycle of the crop, making their operation extremely efficient. With supplemental lighting, these kalanchoes usually receive light levels of 6500 lux per day. Depending on the varieties, plants can have 0 to 14 long days, while other varieties and sizes go directly into short days.

Parts of Europe are banning PGR use
These annual trips to Europe are always extremely educational. They make us think about the future of the industry and where are we heading next. For one, we left Europe with a thirst for more knowledge on alternatives to PGR’s. Come April 2020, several countries in Europe will be banning the use of PGRs and fungicides – and  where does this leave us? It now falls on breeders to produce quality plants that need fewer applications of PGR’s and at the same time, have more controllable habits. Of course, there will always be a need for product that can slow down the growth of a plant, but what exactly would that be? This is where more research and trialing will come into play.

While in Europe, we had the opportunity to visit the Dümmen Headquarters where much of the new breeding on chrysanthemums and kalanchoes are being trialed. It was incredible to see! With the PGR ban coming, the R&D team has been looking for less vigorous and more easily controllable varieties to add to the kalanchoe assortment.

It was truly incredible to have an inside view of the new breeding on kalanchoes from Dümmen Orange. From one-of-a-kind bicolours and massive flowering varieties, to compact and vigorous varieties. the R&D team is breeding for any purpose you can think of. While walking the greenhouse, we spotted a brand new variety that Dümmen is calling ‘Gloss’. Gloss is a brand new, one-of-a-kind pink bicolour plant, and it has been peaking the markets’ interests.

Breeding for ease of production
Our final visit was in Germany, where we met Sven, a dianthus breeder. The team was incredibly impressed with Sven. He had every variety that he was breeding on trial in his own greenhouse where he and his brother take care of everything. They understand what a grower is looking for because they don’t just breed varieties with neat flowers, they also breed for ease of production. It just so happens that they produce incredible varieties as well! While walking the range with the team, Sven showed us one of his most beautiful dianthus creations, which he calls “Smoochies”. Smoochies is a new variety that is bred to be more compact. It can be used for all seasons but would likely have a greater impact at the consumer level for Valentine’s day, Easter, and Mother’s Day.

A glimpse at the future
For the team, going on trips like this really gives us a new perspective on the industry. It makes us look ahead to see where we might go. This trip, more than any other trip to Europe, truly had a large impact on us. We were able to engage with passionate, like-minded people from this incredible industry, and we left Europe with a thirst for more knowledge and lasting relationships made.

Maximillian Epp is a Canadian program consultant for Dümmen Orange. He can be reached at M.Epp@DummenOrange.com.


Related
Grower of the Year: On the cutting edge
Transplanting takes a robotic turn
Floral attraction in the gardens
Top annuals named for 2020/21 in Canada