Wood fibres and products aren’t just here to stay, but rising steadily in proportion within soilless mixes. How high can it go, and is it sustainable? 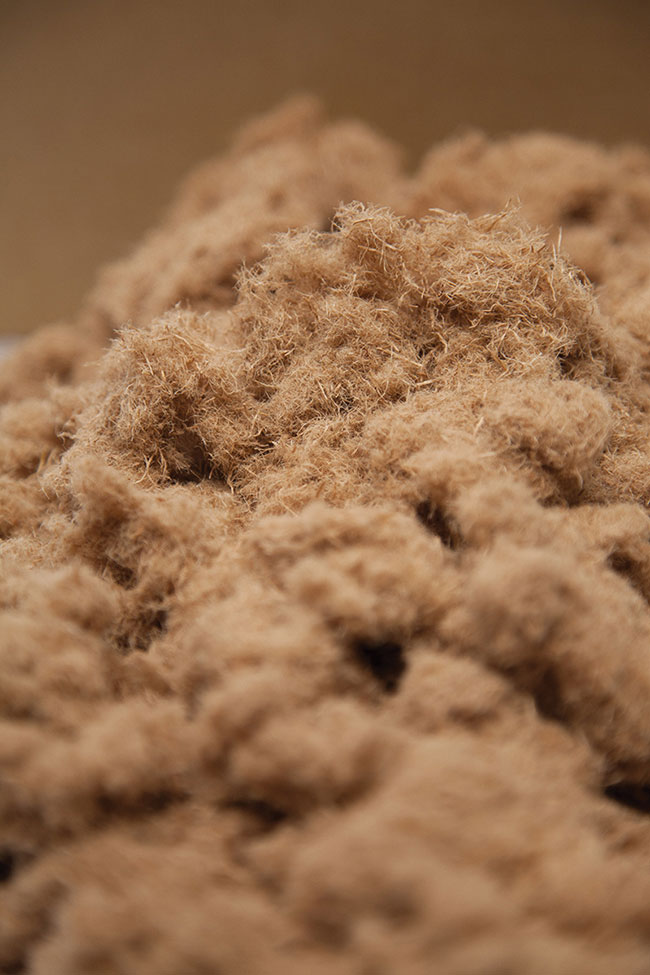 Wood fibre isn’t the new kid on the block anymore.

As a component in growing media, wood fibre first emerged in Europe around the late 1970s, says North Carolina State University researcher Dr. Brian Jackson, who reveals that over 40 different wood fibre products have been developed since. But it wasn’t until 2005 that interest in wood fibre really picked up in North America.

“It truly has been remarkable to see where we are today,” Jackson says. Building a comprehensive research program almost entirely around this topic, he’s observed a steady rise in interest among growers, not only in the adoption of wood fibres, but in raising the proportion of wood content in mixes as well. This, he attributes to a number of key factors.

The first is what he calls the domino effect. Some of North America’s largest growers trialled these materials early on, and now have several years of success to show for it. “That gives other growers the confidence to try it,” he says.

The second factor is information. Whether communicated through trade publications, grower meetings or conference presentations, an expanding resource of readily accessible knowledge has coincided with the growing interest in wood fibres – each undoubtedly fuelling the other. Jackson says he has received phone calls and emails from over 140 individuals and substrate manufacturers from 13 countries on five continents, just in the past year alone.

Out of all the reasons however, cost is perhaps the number one driving factor. “Many, if not most of all wood products offer… a very competitive [or] cheaper alternative to traditional materials,” Jackson says. Compared to peat and perlite, wood has the potential to be more easily sourced and transported. While the vast majority of peat originates from Canada, perlite is primarily imported from Greece and the islands surrounding it. “That’s one of the reasons why perlite is the most expensive component in growing media.” By comparison, wood offers the properties of perlite at a fraction of the cost.

What started across the pond

For Europe, it was a different story. Rather than replacing perlite, growers were searching for a peat alternative.

“Places where they have used a lot of peat traditionally from Germany, the UK, Ireland – those areas were quickly becoming depleted because of the way that they harvest,” explains Jennifer Neujahr, director of horticulture at Profile Products. Tasked by European blenders to develop a wood-based peat alternative, the substrate manufacturer responded by introducing their HydraFiber wood fibre product around 10 years ago. At the time, European producers faced mounting pressure from retailers and consumers to dial back on peat content for sustainability reasons. It wasn’t long before North American blenders and growers showed interest in their product, just not for the same reasons.

Canadian growers are happy with their peat, says Neujahr. The majority of their North American customers use their wood fibre products to replace perlite or coir – both of which can sometimes be difficult to source or lack consistency between batches. “Many of our growers were using the Cornell recipes, which were peat-lite in nature. Since our start, most of our customers have now evolved their blends to 70 per cent peat, 30 per cent HydraFiber. They’re taking away a bit of peat, coir or bark – it really depends on the customer and what their pain point is.” 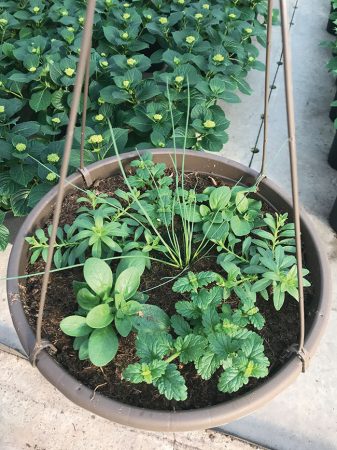 Wood fibre is being incorporated to a greater degree in peat blends.

Not all wood products are equal

One of the key advantages for using engineered wood fibre material is consistency. Whether it’s pH, EC, water retention or other properties, a factory-made product is more likely to deliver a consistent product time-after-time. However, the wood fibre must be engineered for that to hold true.

“The commercial suppliers, both in North America and in Europe…go through extensive quality control and quality assurance programs, similar to peat materials,” Jackson says, meaning the product is highly consistent from batch to batch, shipment to shipment. But like many other manufactured goods, not all wood products are created equal.

“There are about five different methods of making wood substrate products. Three are dominant,” he says. Of the three, two require the use of high precision machinery amounting to hundreds of thousands of dollars in equipment costs. “It’s a very detailed, very specific process for how to engineer wood products into substrate material.”

One of the primary goals of Jackson’s research program at NCSU is to understand the different wood fibre-processing techniques and to characterize the properties of those resulting products. “To date, I have acquired over two dozen wood products from around the world.” Slight differences in processing can lead to different particle sizes, shapes and properties of the final product, so it’s critical that growers work with the manufacturer to figure out best practices for their product.

As to which products are superior, it really comes down to how the growers use them. “A good grower can take any wood material, as long as it’s not toxic, make it work well by modifying their production practices….I do not think one commercial product is at all superior to another.”

But one thing is for certain. Without the right experience or equipment, growers or independent wood manufacturers looking to create this wood fibre themselves could end up with a subpar, or even deadly, product.

“Sawdust coming from a lumber mill … may be ‘commercial’ from a definition standpoint, but it’s not an engineered substrate material,” Jackson explains. Experienced commercial wood fibre manufacturers will remove inherent toxicities from fresh wood. Contained in freshly cut trees, compounds such as those responsible for the smell of pine can inhibit the growth of young seedlings and herbaceous plants. Growers or inexperienced manufacturers who make their own wood fibres with techniques that do not reduce those toxins could potentially lead to stunted crops.

The source of wood should be the same stock normally used for pulp or paper. “Materials from pruning, commercial waste, storm debris, lumber material for instance, those different wood types may not yield a consistent product,” Jackson explains. Treated, kiln-dried wood or other wood waste could harbour heavy metals or other unfavourable substances, making them unsuitable for growing media.

Currently, Jackson’s research team is tackling the topic of wood toxicity removal and how growers could use less costly equipment (hammer mills) to create suitable wood substrate products. Once accomplished, he expects the results will enable growers to collaborate on making wood products themselves during the off-season. 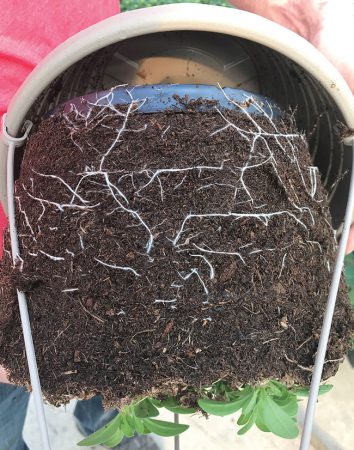 Growers are encouraged to conduct trials before switching mixes.

Private R&D lines can create custom blends for growers interested in trialling with their own products and in their own facilities. For Profile Products, each trial typically lasts for one and a half seasons, allowing them time to replicate results from the first season. “Every one of us has been taught in our horticulture classes that your mix is a peat-perlite base mix. Moving away from something that you’ve been taught is a big step,” says Neujahr, which is why their technical team works with the grower to determine the best inclusion rates to use and how.

Partnering with AgroNomix, they produced a specialized piece of equipment that will help fluff out their highly compressed wood fibre product, allowing for more uniform blending with the base media of the substrate. For growers who are hesitant to acquire a new piece of machinery, the company has since released alternative products in skyscraper tower bale forms that are less compressed, but can be broken apart by a front end loader and are more easily flowable out of a hopper.

Aside from equipment, the education piece has been an important aspect of their service, says Neujahr. Proper watering technique is one of them. “Because HydraFiber has more water holding capacity, our customers typically tell us that they have to be more mindful of their watering. Some folks water less, some folks don’t change a thing, but they notice that their soil stays wet longer.” Neujahr has also found that their growers typically change up their irrigation strategy to be less frequent in the early part of the production season. “Then as the days get long and the temperatures warm up, they go back to their normal irrigation schedule.”

Because the wood fibre itself is fluffier than what growers may be used to, Neujahr says they work with growers to adjust their pot filling strategy. “Our product tends to dump out of hoppers rather than flow out of [them], so it takes a little bit of adjusting. Once you figure it out, typically you don’t have to adjust again.” To date, their growers have successfully incorporated wood fibre products from as little as 15 per cent, to as high as 100 per cent of their growing media.

Given the differing physical and chemical natures of wood fiber products, wood fibre mixes will not act in the same ways as those made with peat. As research reveals, the high air porosity and water retention – two advantages commonly touted for this type of substrate – can mean quicker surface drying even with sufficient water in the container, for instance. But once those quirks are mastered during trialling, growers may notice some advantages to incorporating wood fibres.

The future of wood

15 years ago, Jackson’s PhD work and other horticultural research teams were exploring the possibility of growing entirely in wood substrates. Though relevant, the wood products used back then are not those offered today. Now, wood fibres are being added as a percentage of the substrate at 20 to 40 per cent.

Driven by grower success, economic advantages and a growing market presence, the future looks to be pushing wood fibre content higher and higher, but Jackson cautions against going too high too quickly. While he doesn’t see wood fibre replacing peat in North America, he’s noticed that peat producers are incorporating more of this substrate material into soilless peat mixes.

“Wood isn’t necessarily a threat, but it’s something that could be looked at as a marriage,” he says. “The future of wood and peat [together] will offer some exciting, new and highly innovative substrates for any grower using any type of growing system.” The same may not be true for perlite, however. “Unlike any other substrate additive or aggregate in the past that has been offered as an alternative to perlite, wood is different. I don’t think growers who switch from perlite to wood products will ever go back to using perlite.”

While some advocating against wood substrates may predict the decline of wood fibres or loss of market share to other materials, Jackson disagrees. “We are fortunate to have some of the greatest forest resources on earth,” he says. With Canada and the United States being two of the four most highly forested countries in the world, there are enough wood resources to handle horticulture’s needs for the foreseeable future.

Related
Healthy roots from start to finish
The complexities of managing the media
Biochar: Growing a sustainable medium
Which pathogens are really in your water?