Features Crop Protection Water and irrigation
Which pathogens are really in your water?

From water-borne fungi and bacteria to possible viruses, here’s what could be swimming around in your water. 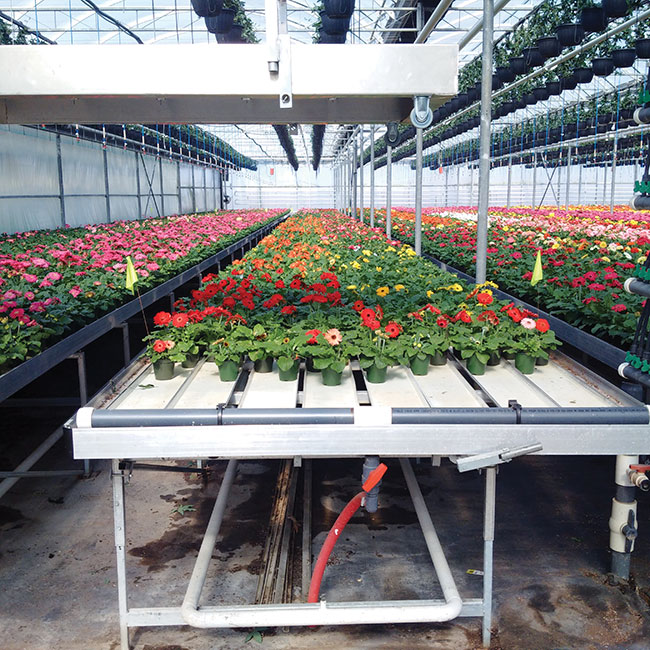 This is part 2 of the water sanitation series.

When it comes to talking about disease-related issues in greenhouse crops, one point of confusion is often over which pathogens can be transmitted by water. Some are obvious – we all know Pythium is water-borne. But what about other culprits, like Fusarium or Erwinia? Should you worry about these in your recirculating water?

You may have heard the term “water-borne” when discussing irrigation water and disease risks from fungi, but aren’t sure exactly which pathogens it includes. Join the club.

Generally, there are two types of pathogens we can consider as “water-borne” fungi. The first and most classic definition points to pathogens that are motile in water (i.e. produce swimming structures). This includes Pythium and Phytophthora. Both of these diseases are technically classified as “water molds”, being more closely related to algae than to fungi, though they look very much like fungi. They are well-adapted to an aquatic environment and can live where irrigation water is stored (cisterns, ponds) for long periods.

Then there are pathogens that survive for short periods in water and are carried by bulk flow with water and soil debris. We can also consider these water-borne, since they can theoretically carry disease from a single infected bench throughout your whole facility via your irrigation system.

Fusarium, Thielaviopsis, Alternaria, Botrytis, Ascochyta, Rhizoctonia, and Verticillium technically all fall into this second category. Species of Fusarium carried in irrigation water have been conclusively linked to outbreaks of root rots. However, direct links between these other pathogens in irrigation water and disease outbreaks still need to be made in greenhouses – but we shouldn’t rule them out. Other routes – such as splashing via overhead watering, dirty benches or ground covers, and vectoring by tools, shoreflies and fungus gnats – may be more likely transmission sources.

Purely foliar diseases – like powdery or downy mildew – have not been reported from irrigation water, and this is not a known transmission source for these pathogens. Controlling humidity in your greenhouse through proper ventilation, however, is key to preventing and controlling these diseases. 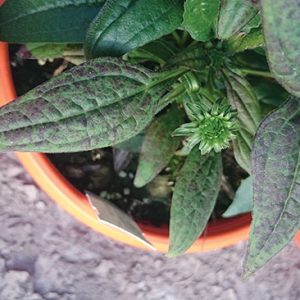 Plant viruses can remain viable in recycled water, but this is an uncommon route of transmission. Pictured: Impatiens necrotic spotted wilt virus in Echinacea. 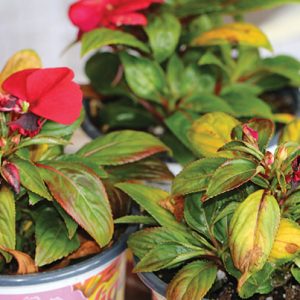 Impatiens can be infected by Pythium aphanidermatum, a common water-borne disease.

Bacteria are another important pathogen type to consider when it comes to your water. Specifically, Erwinia (now known as Pectobacterium carotovorum), Xanthomonas and Ralstonia have been shown to infect ornamental greenhouse crops via irrigation water. Some bacteria can remain biologically active in water for over a month if the water is untreated.

Further, bacteria are likely to build up and form what’s known as a biofilm in your pipes and irrigation lines. This can clog emitters and create losses due to wilting, plant stress, and extra labour.

Most viruses need a mechanical form of transmission to get into the plant. Examples are the piercing mouthparts of vectoring insects (e.g. thrips or aphids) or pruning equipment.

But surprisingly, some viruses have been shown to spread through recirculating nutrient solutions in greenhouses, infecting the plants via sensitive root tissue without an insect vector. Examples include the highly contagious Pelargonium flower break virus and tomato spotted wilt virus (TSWV). However, high virus loads are needed for this to be a source of transmission.

Generally, managing insect vectors – and your employees – is more important to controlling the spread of viruses than managing your irrigation water. However, plants exhibiting viral symptoms should be disposed of as soon as possible to prevent the spread of the virus via all possible transmission routes.

When to Suspect Your Irrigation Water is To Blame

As with many things, we have to remember that correlation does not necessarily mean causation. Just because a pathogen is found in your water supply doesn’t necessarily mean it’s where your disease pressure is coming from.

Here are some questions to ask yourself when a disease issue arises (adapted from Hong et al. 2005):

Now that you know which pathogens can be spread via your irrigation water, the next step is to learn how to effectively sample your water, so it can be properly managed as part of an Integrated Disease Management (IDM) program.

Sarah Jandricic, PhD, is the greenhouse floriculture IPM specialist for the Ontario Ministry of Agriculture, Food and Rural Affairs. She can be reached at sarah.jandricic@ontario.ca.

Related
Finding water sanitation problems before they start
The three D’s: Diseases, disease triangle and diagnosis
Which Pathogens Should You Worry About in Your Water?
Garden mums: To produce and protect