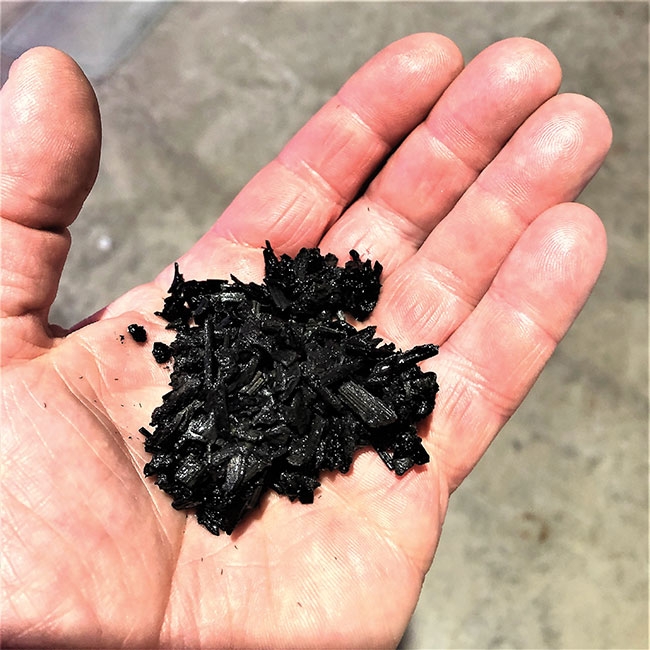 Smaller, specialty companies currently sell biochar for $1,500 to $2,000 per metric tonne, and it’s difficult to find.

“Can we grow plants in pure biochar?” That was the question Lethbridge College researcher, Nick Savidov set out to answer nearly twenty years ago, conducting one of the first extensive studies to test biochar as a growing medium rather than a mere component of it.

Lightweight, long-lasting and microbial-free, biochar is commonly made by heating organic matter to above 400 °C in an oxygen-free environment. It’s a process called pyrolysis. “There is really no difference between biochar and charcoal,” he explains. While charcoal is usually created from wood, biochar can be made from any organic material, such as wood chips, straw, rice husk, coconut husk and peat.

There are several key benefits to using biochar, and stability is a big one. “The longevity of the material would probably be thousands of years, if not millions,” says Savidov. Bacteria have a hard time consuming biochar, and if they do, it’s a very, very slow process. This helps preserve the properties of the growing medium. Its potential for long-term repeated use reduces substrate costs for the grower.

A highly porous material with pore sizes ranging from milli to nano, the little pockets of space allow for high water retention and aeration. It also makes for a lightweight growing product, lowering the costs of transport and handling. The starting material can lose about two-thirds of its weight in the process of producing biochar, mostly to water and carbon dioxide. Its density will depend on the feedstock. “[With] relatively dense materials like bamboo, the bulk biodensity of biochar can be 400-500 kg per m3. If you are using wheat straw, it can be as low as 50-70 kg per m3,” says Savidov.

With different starting materials and varied conditions for pyrolysis, creating standardized, horticultural grade biochar has been challenging for commercialization. Incomplete pyrolysis can create polycyclic aromatic hydrocarbons (PAHs) that range from being completely harmless to highly toxic, affecting the quality of the biochar. It’s impossible to tell from the naked eye, says Savidov.

Its inherent alkalinity varies between pH 8 to pH 10. However, Savidov’s team tackled this problem by pre-washing with water and nutrient solution, successfully growing over six different ornamental and vegetable greenhouse crops in more than 20 trials. From nasturtium to tomatoes, the crops produced similar or higher yields compared to commercially-available substrates.

Their experiments also observed biochar’s algae-suppressing properties, deterring disease-carrying fungus gnats. Produced at high temperatures, biochar is completely sterile – an advantageous medium for high-nutrient crops like cannabis, says, Savidov, where even the slightest possibility of a pathogen can quickly ruin the crop.

The high porosity of biochar helps it filter and immobilize different types of particles. In one study, biochar reduced the toxic effects of herbicides by about 10 times in basil, helping address herbicide leaks in dugouts used as a water source for greenhouses. Lately, Savidov’s team has been trying biochar in aquaponic filtration systems, filtering out bacteria and finer biosolids.

Because the market is so small, specialty companies currently sell biochar at $1,500 to $2,000 per metric tonne, and it’s difficult to find. If produced on a larger scale, Savidov believes it can be sold at a much cheaper price. “Biochar production is energy neutral,” he explains. “It produces enough energy to sustain the pyrolysis process until it’s completed.” Plus, it can be produced from spent, renewable substrate and feedstock, which can help sequester carbon for added sustainability.

The biggest hurdle now is standardizing biochar for horticulture and creating a market, but the question is by whom – the supplier or the grower?

“The value for horticultural application is great. You can use it as a soil amendment [or] an alternative to greenhouse substrate, but somebody has to take the first step.”