Have you ever wondered whether monitoring and mass trapping cards look different to pests under different types of lighting?

Let’s face it – Canada’s greenhouse industry is eager to embrace new technologies. A key example is the use of LEDs in the greenhouse industry, going from preliminary research tests to widespread use for supplemental lighting in less than 20 years. The use of LED lights over conventional lighting comes with all sorts of gains – from production yields to energy savings. But are we sure we aren’t leaving something behind?

When technology has the capacity to be a game changer, we tend to focus our efforts on studying its direct effects, such as growth time and crop quality. But we often don’t stop to study what the indirect effects could be, both positive and negative.

With LEDs, the key indirect effects we need to consider are on insect and mite pests that infest the crops we are lighting, and the IPM strategies we use to control them.

Previous articles in Greenhouse Canada have covered some interesting preliminary results on the effects of LEDs on natural enemy biology and behaviour (see Arthropods and Greenhouse Lighting: Like Moths to a Flame by Dr. Rose Labbé and Cara McCreary, Greenhouse Canada, October 2020 edition). Today’s article asks an even more basic question – do we know how LED lighting will affect something as simple (and as critical for IPM decision-making) as pest monitoring using sticky cards?

A Matter of Perception

Sticky cards used for monitoring and mass trapping are generally yellow or blue, for a good reason. These wavelengths are two parts of the visual light spectrum that insects most respond to. Thrips, especially, respond to blue, which is why this colour of trap is sometimes used in vegetable and floriculture greenhouses (visit ONfloriculture.com for more on thrips and optimal trap colours).

But what happens when we shine what is essentially a purple light (i.e. an LED with a red/blue mix) on a yellow or blue trap card? To the human eye, at least, this certainly seems to have a significant effect on trap colour. But what colours do the insects perceive? Does this make the cards less – or more – attractive to pests? 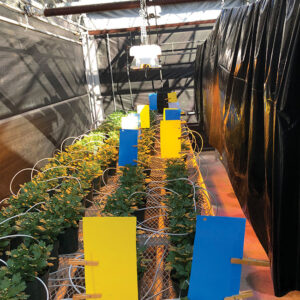 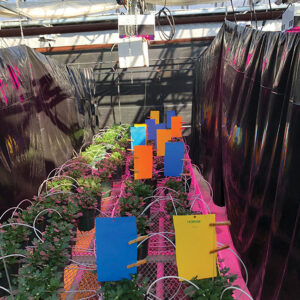 To the same cards under LED lights using a red:blue mix of 50:50 [right]. Photo credit:: OMAFRA

To answer these questions, we set up a trial in research greenhouses looking at the efficacy of monitoring cards under traditional HPS lights compared to red/blue LEDs. Here’s a summary of our set-up.

Insects and plants: We used chrysanthemums as a model crop. They don’t need supplemental lighting, but they do host a variety of pests. 30 thrips per bench were released into the crop and allowed to reproduce for two weeks. The fungus gnats came free!

Lights: We hung a single light (LED or HPS) above the centre of each bench filled with 100 pots of 6-inch mum plants. We used a 50:50 red-to-blue light ratio for the LED.

Blackout curtains were hung between the benches and along walls shared with other greenhouse compartments to prevent interference from other lighting sources, with the exception of natural sunlight from above.

Insect monitoring: We set up pairs of yellow and blue sticky cards at the focal points of the lights and at various distances down the bench that registered significantly lower readings with a light meter. This was so we could see how cards responded in the “bleed zones” of the lights, as well as directly under them.

Benches were also split into two sections (A & B) with equal numbers of card treatments in both, to give us more data points to work with.

Cards were collected at various time intervals and put into clear plastic bags, then thrips and fungus gnats were counted at a later date. 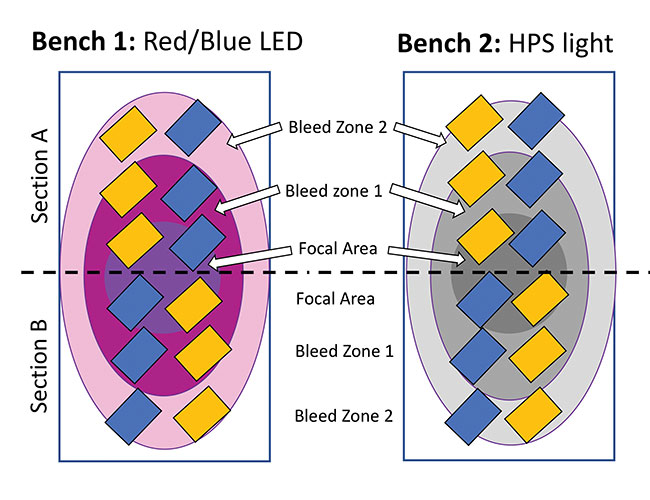 A diagram of the trial set-up investigating lighting effects on mass trapping/monitoring cards. Each bench contained 12 sticky cards placed directly above the crop. Light intensity directly under the light (i.e the focal point of each light, represented by the darkest circle) was 350 μmol/m2/s for both types of lights. In the first bleed zone, light intensity was ca. 215 μmol/m2/s. This was reduced to 150 μmol/m2/s in “bleed zone 2” for the LED lights. However, the HPS light had less range; light intensity in bleed zone 2 was similar to ambient lighting conditions at around 115 μmol/m2/s.
Photo credit: OMAFRA

What do I spy with my little eye?

After all this work setting up our trial, what did we find with our pest insects of interest? Well, the answer depends on what day you might have asked us…

Our first trial was run over two weeks to see how the light sources affected insect attraction to cards across a variety of overcast and sunny days. This was our “real-world trial,” as the variation in source and intensity of light resembles what we expect to see in commercial greenhouse production using supplemental lighting.

We know from previous research in Southern Ontario, that over two-week periods, yellow cards catch more thrips than blue cards at a ratio of 70:30 under ambient lighting. In our first lit trial, this held true for thrips caught under both HPS and LED lights. If there were no perceived differences in our card colours when it came to attracting pests, you would expect around 50 per cent of the insects to be caught on each colour – but we saw 68 per cent of thrips going to yellow, on average. This was also seen in fungus gnats, which preferred yellow cards at a similar ratio.

Overall, this is good news for growers in traditional greenhouse production facilities. They can continue the practice of using yellow monitoring and mass trapping cards – which effectively catch a variety of flying pests – regardless of their lighting type.

Proportion of thrips caught on yellow or blue trap cards under supplemental lighting from A) HPS lights or B) LED lights over a two-week period. The dashed line at 0.5 represents where we would expect the bars to be if thrips had no preference for card colour. An “*” indicates that the data significantly differed from the expected ratio of 50:50 at P ≤ 0.10, meaning the colour with the taller bar was preferred.
Photo credit: OMAFRA

Although the proportion of thrips and fungus gnats caught on yellow versus blue cards were similar across both lighting types and lighting areas, the actual number of thrips caught in the different lighting areas varied in a way we didn’t expect. Under HPS lights, the highest number of thrips (1,072) was caught in the focal area, compared to just 236 thrips in bleed zone 2. This trend was reversed under the LED lights – most thrips were caught in the farthest bleed zone, with the fewest under the focal point. We don’t know why this is yet, but it certainly warrants further investigation, as optimal placement of monitoring or trap cards under HPS versus LED lights might differ.

We also ran a second trial over a 24-hour period of extremely overcast weather. This was intentional (what we call a “worst-case scenario” trial), so we could see what happens when most of the light comes from supplemental lighting. These conditions more closely mimic warehouse-style cannabis or microgreen production, or greenhouse conditions at latitudes with little natural light in the winter.

As you can see from the graphs to the right, we got some interesting results. Although overcast conditions did not change how thrips or fungus gnats responded to card colour under HPS lights, it did under the LED lights. In the bleed areas, the purple light from the mix of red:blue LEDs seemed to cancel out the effect of card colour – both yellow and blue were equally effective! 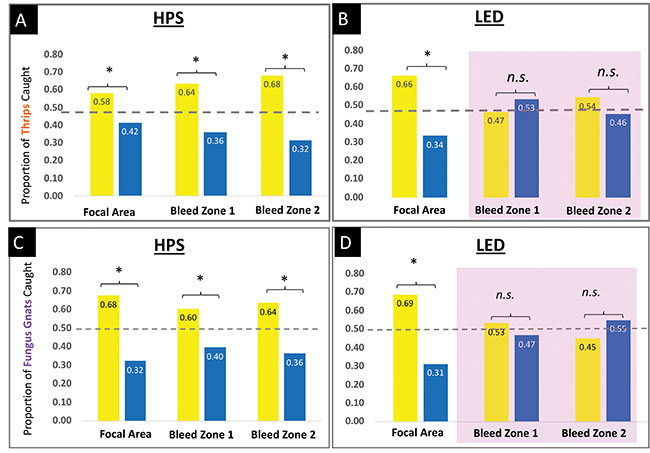 Proportion of thrips (A-B) or fungus gnats (C-D) caught on yellow or blue mass trapping cards under HPS or LED lights. The purple highlight indicates areas where LED lights changed the attractiveness of the cards tested. The dashed line at 0.5 represents where we would expect the bars to be if insects had no preference for card colour. An “*” indicates that the data significantly differed from the expected ratio of 50:50 at P ≤ 0.10, meaning the colour with the taller bar was preferred.
Photo credit: OMAFRA

It’s unclear, exactly, why we didn’t see this effect at the focal point of the LED light – perhaps the vertical position of the cards directly under the light protected them from drastic colour changes on the sides of the cards; we just aren’t sure yet.

But this certainly suggests that when LEDs are the only light source, the light recipe chosen can drastically affect what we think we know about something as simple as optimal monitoring card colour. Further testing is needed in systems like warehouse production and vertical farming to see how lighting types affect the usefulness and optimization of traps for monitoring and pest management.

Until IPM researchers have a little more time to play catch up with greenhouse lighting’s effects on insects, it’s a good idea to test trap colours and types in your own facility to get the answers you need. A quick two-week trial with pairs of cards set up at various distances from your light source (at least four pairs) is all you need to shed some “light” on the subject!

Sarah Jandricic, PhD, is the greenhouse floriculture IPM specialist for the Ontario Ministry of Agriculture, Food and Rural Affairs (OMAFRA). She runs the ONFloriculture blog (ONfloriculture.com), which provides timely pest management information to floriculture growers. Reach her at sarah.jandricic@ontario.ca.

Related
Tips and tricks for on-farm lighting trials
Do plants need sleep?
Arthropods and greenhouse lighting: Like moths to a flame
Lighting reduces days to tomato harvest for organic greenhouse