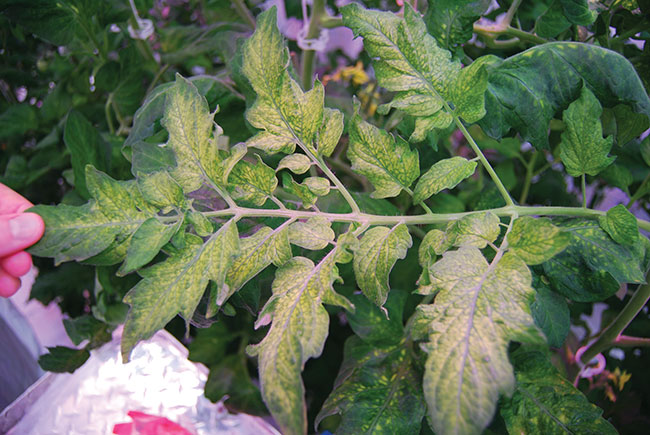 Figure 1. When grown under 24h of light, this tomato plant showed signs of chlorosis.

The Canadian greenhouse vegetable market is a $1.5 billion industry and consumer demand for year-round supply of high-quality vegetables continues to rise. However, greenhouse vegetable production during the winter months is limited in Canada due to the lack of natural solar radiation. Between the months of November and February, the daily light integral (DLI) from sunlight is often less than 10 mol·m-2·day-1. That is to say, the amount of light reaching the plant over a 24-hour period is far below the typically required 30mol·m-2·day-1 for greenhouse tomato and cucumber production. For this reason, supplemental lighting has been adopted to increase the DLI to levels that will sustain year-round production.

The cost of electricity for lighting is one of the largest expenses for year-round greenhouse vegetable production. Furthermore, the rapid adoption of supplemental lighting has led to a shortage in power supply available to the Ontario greenhouse industry, especially in the Kingsville-Leamington area, which houses the most concentrated greenhouse vegetable production region in Canada and the US. Managing the power system in Ontario, Independent Electricity System Operator (IESO), has asked the greenhouse industry to develop demand-side solutions to reduce electricity usage, especially during peak hours of the day.

Lighting The Same, For Less

High pressure sodium (HPS) lamps have been the dominant light source for year-round greenhouse vegetable production. Photoperiods of 16 to 18 hours at a supplemental light intensity of 200-220 µmol·m-2·s-1 is typically used in the production of greenhouse fruiting vegetables, such as tomatoes and cucumbers. Supplemental lighting normally starts between 11pm and 1am, ending at 5pm the next day. Improvements in plant growth and fruit yield from lighting are mostly determined by the DLI – the total amount of light received by the plants during the day. This is calculated by multiplying the photoperiod (in hours) by light intensity (in µmol·m-2·s-1). If a long photoperiod such as 24h were to be used instead of 16h, the intensity of the supplemental light would be reduced by one-third to 140 µmol·m-2·s-1 while still delivering the same DLI. This method would not only cut down on light fixture costs (capital costs) but also reduce electricity demand during peak hours in the day and shift it to off-peak hours in the night when electricity pricing is lower. According to IESO, this rate can be 50 per cent less.

More recently, energy-efficient LEDs (light-emitting diodes) have been developed for greenhouse application. The current efficacy (2.0 to 3.0 µmol J-1 electricity) is about 30 to 75 per cent higher than HPS light fixtures, which means the adoption of LEDs can significantly reduce electricity consumption. However, the cost of LED light systems is three times as high as that for HPS, which is a major barrier for the adoption of LEDs. The 24h low intensity lighting strategy can significantly reduce the light fixtures/capital cost, and thus facilitate the adoption of energy-efficient LEDs to reduce electrical usage.

However, there is a challenge to this proposed 24h lighting strategy. Plants, just like humans, need sleep. When grown under more than 17h of light, the plants of greenhouse fruiting vegetable crops usually become damaged, showing signs of leaf chlorosis (Figure 1), reduced photosynthesis, and ultimately, a reduction in yield (Hao et al., 2018). It has been hypothesized that this photo-injury is controlled by circadian rhythms through an integrated temperature and light signalling pathway in the plant. In our previous research, we partially addressed this problem by developing temperature-control strategies with a pre-night temperature drop, which significantly reduced leaf chlorosis and improved fruit yield, while extending the photoperiod to 19h to 21h for greenhouse fruiting vegetables grown under HPS. However, we still cannot use 24h of HPS light yet because of the photo-injury. With the reduced thermal radiation/high-temperature stress, and the flexibility to change light spectrum with energy-efficient LED technology, we could develop 24h low intensity lighting strategies which can sustain yield and fruit quality while significantly reducing peak electrical demand and cost. In our present research, we are exploring the timely/smart use of different spectra of LEDs to allow for injury-free production with 24h lighting. 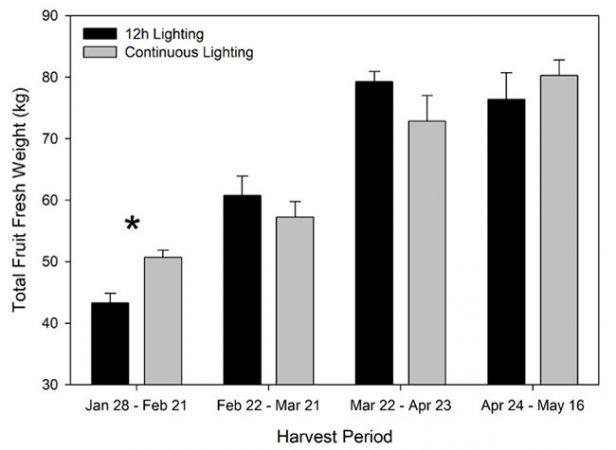 To further optimize this 24h lighting strategy, we expanded the study in the winter of 2019/2020 with the goal of reducing light fixture and electricity costs without compromising yield and quality. By using 16h of red (170 µmol·m-2·s-1) followed by 8h of blue (50 µmol·m-2·s-1) during the night, we achieved a 12 per cent reduction in light intensity during the day compared to the conventional 16h of lighting (red+blue together followed by 8h darkness) at the same DLI (DLI = 12 mol·m-2·day-1). The result was a reduction in light fixture and electricity costs (peak power demand) without compromising fruit yield and quality. Further studies are being planned to determine the light intensity threshold and light spectrum that can be tolerated by plants during the night in an effort to further reduce light fixture and electricity costs.

Building on the success in tomatoes, we also tested 24h lighting strategies on mini-cucumbers during the winter of 2019/2020. We discovered that three different 24h lighting treatments: (i) 24h red+blue, (ii) 16h red followed by 8h blue and (iii) 12h red followed by 12h blue, supported growth at similar rates as the conventional lighting treatment (16h red+blue together followed by 8h darkness). All treatments provided the same DLI of approximately 12.1 mol·m-2·day-1. 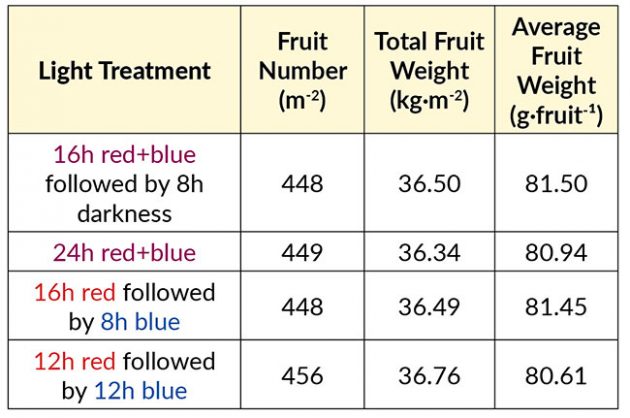 Table 1: Mini-cucumber yields from plants grown under a conventional 16h photoperiod or one of three continuous lighting strategies with a DLI of 12.1 mol·m-2·day-1. Production period was from November 19, 2019 to March 20, 2020.

Daytime photosynthetic rates were similar between all treatments while nighttime respiration rates were drastically reduced by all 24h lighting treatments. While photosynthesis doesn’t typically happen during the night period, using continuous lighting introduces light during this dark period. The reduced respiration rate is an indication that the light in the continuous light treatment is causing some rate of photosynthesis at night. This reduces the amount of carbon lost and can lead to higher overall carbon gain (i.e., more biomass production).

Of note, no plants under 24h lighting showed any leaf chlorosis attributed to photo-injury. All treatments supported similar yields (Table 1). Therefore, 24h LED lighting at 140 µmol·m-2·s-1, instead of 16h lighting at 210 µmol·m-2·s-1, can be used in year-round mini-cucumber production, which will cut down on light fixture costs by a third and reduce electricity costs. Mini-cucumbers seem to be more tolerant to 24h lighting than tomatoes and the reduced thermal radiation/high-canopy-temperature stress of energy-efficient LEDs may be sufficient to eliminate photo-injury.

The studies at Harrow Research and Development Centre represent the first of their kind to illustrate how dynamic 24h lighting can be a viable strategy for greenhouse fruiting vegetable production. There is great potential for reducing the capital costs of lighting and expenses in electrical usage. This lighting strategy is currently being explored for year-round sweet pepper production.