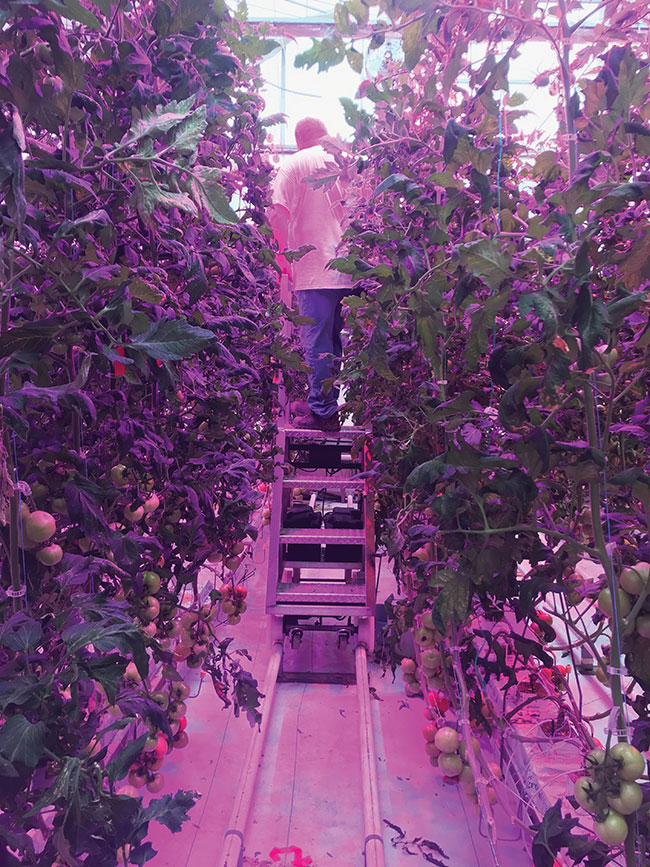 If a grower could see individual photons of light, it would still be impossible to provide the exact number, and at the right wavelengths, to optimize production. However, technological innovations have made it possible to do just that.

Horticultural light-emitting diode (LED) fixtures entered the commercial market in 2006. Unlike their high-intensity discharge lamp (HID) predecessors, LEDs save energy by dimming to almost any level below maximum intensity, and by more efficiently converting electricity to photons useful to plants. Manufacturers also produce LEDs in a wide range of wavebands and fixtures with adjustable spectrum so that growers can choose practically any spectrum they need.

Dr. Xiuming Hao, research scientist at  Agriculture and Agri-Food Canada and Dr. Melanie Yelton, former VP of research, at LumiGrow Inc., have recently been presenting what they’ve learned this past winter from two innovative experiments using LED fixtures. Their research found that the wavelengths radiated by LEDs, and the light sensors that control fixture function, can transform how controlled agricultural producers manage their crops.

Light sensors for more consistent lighting and energy savings
In one experiment, LED fixtures provided supplemental light to tomatoes via a novel sensor/algorithm control method. Before exploring the details, let’s consider why supplemental light is important to begin with.

Most crops increase or decrease growth rates in response to light based on “the one per cent rule”. That is, a one per cent increase in light equates to a one per cent increase in yield, up to a certain point (Marcelis et al., 2005). Take a typical Ontario greenhouse, for example, which tends to receive 76 per cent less light in November and December than what tomatoes require. Due to the one per cent rule, this equates to 76 per cent less growth. By making up for a yearly average light deficit of approximately 37 per cent, a typical Ontario grower could theoretically increase annual gross revenue by 37 per cent (based on solar irradiance values from NASA Data, 2019).

Yet, lighting is expensive, costing around $24/m2 per year in electricity. Based on a 250 µmol·m-2·s-1 supplemental intensity, 17-hour photoperiod, 18 mol·m-2·d-1 target DLI, $0.11/kWh, and a 1-acre greenhouse with a 60 per cent transmission rate in Harrow, Essex, Ontario. So, it is imperative to provide crops with exactly the right amount of light. Too much will waste energy. Too little means slow growth and lower yields. The ambient light inside a greenhouse usually varies greatly. A solar light sensor can take the guesswork out of optimizing light quantity.

The Value for Cannabis

Many ornamental growers are converting greenhouses to cannabis production and must consider the high light requirements of cannabis. Failing to provide the ideal quantity of light means forgoing substantial revenue. As of October 2019, cannabis garnered approximately $5 CAD wholesale per gram of dried flower. Assuming a typical yield of 430 g per m2 and six flower production cycles per year, cannabis dry-trimmed flower is worth more than $50 million wholesale per acre per year.

A typical Ontario greenhouse receives 80% less light in November and December than what’s needed for optimal cannabis growth. For this reason, without supplemental light, Ontario cannabis growers can expect an 80% loss in revenue. A grower who maintains six cycles per year with inadequate light in the winter months will lose nearly $7 million in November and December ($8.7 million in revenue per cycle).

Certain light sensors can measure ambient light levels within the greenhouse and send these values to a DLI control algorithm. The algorithm then calculates the optimal amount of supplemental light needed to drive plant growth, and directs LED fixtures to brighten, dim, or turn off throughout the day, all while targeting a specific daily light integral (DLI).

From November 2018 to May 2019, Dr. Hao and the Harrow Research team tested tomatoes in duplicate greenhouses. Their objective: to determine how much energy a solar light sensor atop each light fixture could save compared to using conventional threshold lighting  For this experiment, Hao used LumiGrow’s smartPAR light sensors paired with LumiGrow’s 650 Pro e fixtures.

Conventional threshold control methods depend on a single light sensor and usually incorporate light via fixtures that have imprecise dimming capabilities. The researcher hypothesized that, because algorithm-controlled fixtures only provide the amount of light plants can use, and no more, algorithmic control would help save energy.

So, why the difference in energy use? Growers with conventional lighting  have limited ability to dim during conditions where light is just below optimal, and typically light more than necessary to ensure adequate light.

While saving energy, smartPAR control delivered relatively consistent light from one day to the next. It is the ability of LED fixtures to incrementally modify their light output that made these savings possible.

Harrow Research and Development Centre has been testing the effects of LEDs on tomato plants, specifically the effects of DLI-controlled treatments and the use of alternating red/blue light.

Optimizing Light Spectrum for Tomatoes Under Continuous Light
While the first experiment explored energy savings associated with consistently reaching a specific DLI target, the second experiment determined the value of using specific wavebands (colours) as part of a production strategy.

Treating plants with specific wavebands influences a plant’s ability to maintain a circadian rhythm—to regulate its physiology and morphology based on the time of day. Some plants grow well under continuous light (e.g. lettuce). However, continuous light disrupts the circadian rhythm of many plants including tomatoes. Velez-Ramirez et al. (2014) noted that tomato leaves under continuous light display interveinal mottled chlorosis (leaves turn yellow due to a lack of chlorophyll), necrosis (leaves become brown due to cells dying), and experience epinasty (leaf blades curl).

What if modifying the spectrum could alleviate the damage caused by continuous lighting? In the second experiment at Harrow Research Centre, this was the exact question posed by Dr. Hao and LumiGrow. Harrow researchers tested whether alternating red and blue light over a 24-hour photoperiod (12 hours of each monochromatic spectrum) could alleviate the negative effects of continuous lighting.

Scientists hypothesize that one reason continuous lighting damages plant tissue is that carbohydrates accumulate at night if there is no dark period. This build-up damages the membrane in chloroplasts where photosynthesis take place

In the Harrow study, plants growing below the continuously lit, alternating red/blue treatment did not accumulate carbohydrates, and photosynthetic performance remained similar between the 12-hour treatment and 24-hour treatment. At 55 days after treatment initiation, there was no difference in 12 out of 13 plant growth characteristics measured (e.g. leaf fresh weight, plant leaf area, etc.).

Additional experiments being carried out for the 2019/2020 season will determine if the benefits of alternating blue/red irradiation remains when the red-only portion of the photoperiod lengthens. Alternating monochromatic irradiation over 24 hours in tomato production could deliver more photosynthetic light to tomatoes than would be possible under a shorter photoperiod.

The majority of growers still light with conventional fixtures and control lights with conventional threshold control. However, ongoing research has shown that LEDs can provide growers with an advanced level of supplemental light control and can play a central role in helping a grower’s business succeed.

Proving period: lights only off when solar light was above 300 W/m2 for at least 10 mins

Refractory period: lights only on when solar light was below 300 W/m2 for at least 10 mins

Fixture intensity fluctuates based on predictive and current solar conditions

*Note to Reader: DLI values based on data from December 15, 2018 to March 6, 2019; DLI values are higher than tomato producers typically expect during winter months because solar light sensors measured light above the fixture rather than at crop height, and—for experimental purposes—the average supplemental intensity was 300 µmol·m-2·s-1. Tomato growers often supplement light at 200-250 µmol·m-2·s-1.