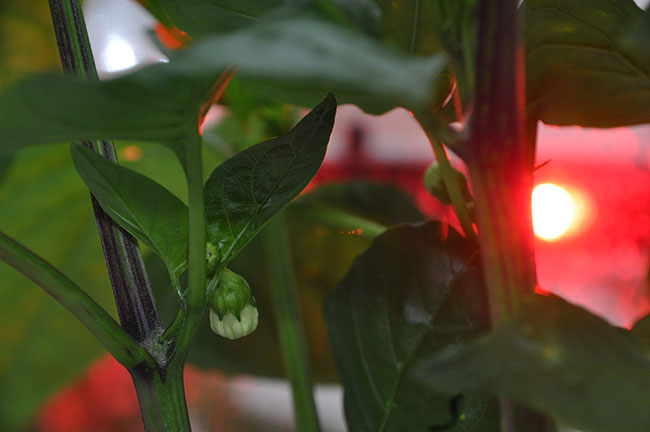 It is well-known that artificial lights can significantly improve crop production. Despite this, little research to date has examined how new light environments impact greenhouse crop protection – both the good bugs and the bad. We know that light impacts arthropods (insects and mites), such as when mayflies are drawn to streetlights, and moths to flames. But how important is it really to greenhouse pest management?

This is one of the big questions that has driven our research at the Harrow Research and Development Centre (HRDC) over the past few years. We asked ourselves: How does light quality, quantity and daily duration affect the arthropods we find in the greenhouse? More importantly, how does the light environment affect their populations and impact pest management? As many growers currently using lights would know, the light environment is so important that it can sometimes tip the balance between a successful and a failed pest management program. Many questions remain: which biological control agents are best applied in various seasonal and light environments, and how can we optimize the light environment to improve their performance while minimizing that of pests?

To better understand how lights affect arthropods in greenhouse and indoor production systems, it is useful to consider how their visual and photoreceptor systems differ from those of humans or plants. For instance, plants are highly sensitive to blue and red light, which is why a dual LED light combination is often used, appearing as purple emanations onto greenhouse crops. Plants absorb this energy readily, using it to build plant cells, stems, roots and fruits. 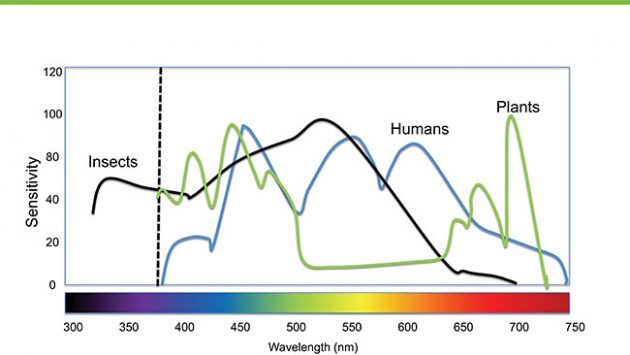 Figure 2. A simplified representation of bichromatic insect light sensitivity relative to humans and plants. A human’s photosensitivity extends from violet to red light. Plant absorption of light energy peaks for both blue and red light. Humans cannot see UV light (lower wavelengths to the left of the dashed line). In contrast, insects use UV light for navigation among other applications

Additionally, insects differ from plants and humans in their acute sensitivity to UV light, which mediates multiple aspects of their biology, including their sense of orientation. For instance, many insects, including bumblebees (who actually have trichromatic vision), will specifically move towards sources of UV light, using it to find suitable food sources such as flower nectar.

In addition to the clear impacts that light quality (i.e. wavelength/colour) has on arthropod behaviour, there are more subtle, but equally important aspects of the light environment that affect how pests and beneficial arthropod populations change over time. Such impacts can be further influenced by the geographic origin of an insect or mite species.

Take, for instance, insects native to Canada, such as thrips predator Orius insidiosus. They are adapted to freezing temperatures and short days in the winter (low light quantity and quality; short photoperiod) and to warm, long days in the summer (high light quantity and quality; long photoperiod). Native insects can also perceive slight changes in day length and temperature over time in a process called acclimation, which will gradually reduce their rates of pest consumption, egg laying and development to prepare for winter survival. This is an important factor in greenhouse biological control programs during Canadian winters, as diapausing (or winter-dormant) predators and parasitoids may not be suitable for use against non-diapausing pest populations.

Diapause in arthropods is a key reason for using commercial biological control agents originating from places where winter is virtually non-existent. For instance, the predatory mite Amblyseius swirskii was originally sourced from the Mediterranean basin, and in Canada, will continue to feed and reproduce on greenhouse crops through the winter. In such locations, arthropods do not experience cold winters and will continue to reproduce even if the light environment starts deteriorating in the fall. In contrast, the native predatory mite Neoseiulus cucumeris, may be more sensitive to winter conditions and would reduce its population growth rate so that it can focus on surviving the winter. To address this challenge, certain biocontrol companies today source native agent powerhouses such as N. cucumeris, or predators such as Dicyphus hesperus, from southerly locations so they can avoid the diapause response in greenhouse production environments.

Despite this, it’s clear that even beneficial arthropods from southerly origins can also dip in effectiveness during the winter. In many instances, this can be compensated for by adjusting the light environment, an element that ongoing research is helping us better understand.

Over the course of the earth’s yearly journey around the sun, the quantity and quality of natural light available for growing crops can vary greatly. Located at northern latitudes, crops in Canada often experience less than half the quantity of solar radiation in the depth of winter compared to the peak of summer. This difference has clear implications for greenhouse crop production. Along with increasing vertical farm acreage, this is one of the main drivers in today’s use of artificial high-pressure sodium (HPS) and light emitting diode (LED) lights for greenhouse and indoor crop production. 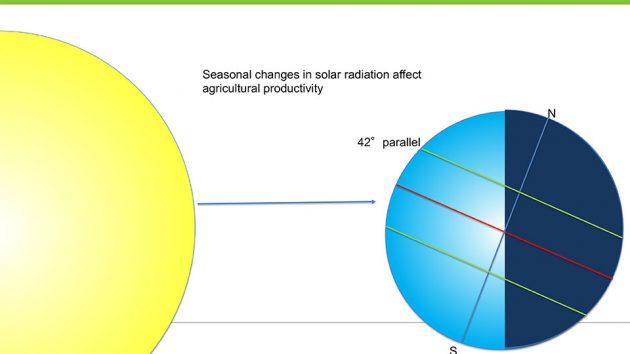 Our research examined the responses of multiple arthropod species to different light and temperature environments, generating some interesting results.

In recent work, we studied the effects of various simulated seasonal and lighting conditions on Orius insidiosus, a notoriously difficult predator to establish on greenhouse crops in the winter. Interestingly, while Orius initially exhibited a rapid and intense reproductive rate under summer conditions, the cost was a shorter overall lifespan and fewer eggs laid compared to other environmental conditions. Whether using low intensity blue or red LEDs, females laid considerably more eggs over their lifetimes under cooler and longer day lengths (20 hours) in supplementally lit environments, and they lived longer compared to females under simulated summer conditions (Figure 3). Females laid an average of 118 eggs under low intensity blue LEDs, almost three times the amount laid in summer conditions. These findings suggest that the use of artificial lights in crop production might improve the survival and establishment of Orius on protected crops grown in the winter. 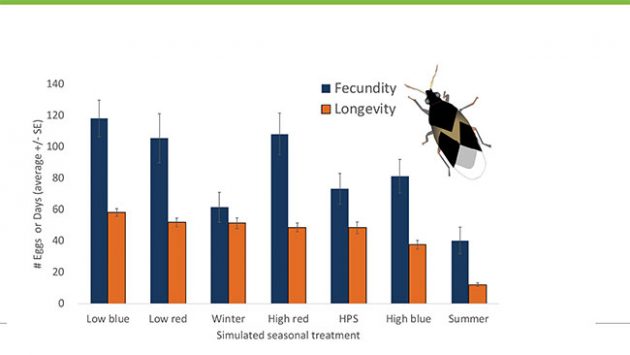 Figure 3. Orius has its shortest lifespan (longevity) and lowest lifetime fecundity (number of eggs laid per female individual) under summer conditions. It lives longer under low intensity blue or red LED lights and lays more eggs over its lifetime under these conditions compared to summer. Female fecundity is also relatively low under simulated winter conditions as well as high intensity blue LED light.

Using a similar experimental approach, we also assessed the response of the native generalist predator Dicyphus hesperus, to simulated light environments. We first showed a remarkable difference in lifespans between male and female predators (Figure 4), with males outliving females under nearly all environmental conditions tested. Regarding the effects of light environments on predator lifespan, we observed that, as a species, Dicyphus fared best under high intensity red LED light, and worst under summer conditions (Figure 4). Interestingly, HPS also seemed beneficial to female longevity, a result which might be explained by the considerably broader, and possibly beneficial, spectral range of light emitted from this source. 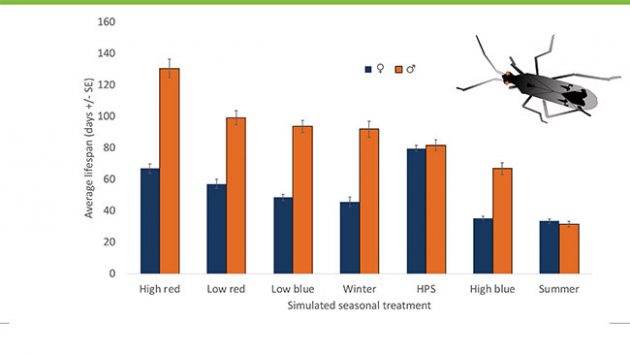 Similar to Orius, the lowest number of eggs laid by Dicyphus over the course of a lifetime was observed under summer conditions (Figure 5). Once again, while the predator may lay many eggs and rapidly in the summer, this comes at the cost of a shorter lifespan. When we think about how this might impact greenhouse biocontrol, clearly warmer is not always better, particularly if we are trying to achieve a steady rate of increase in predator population over time. 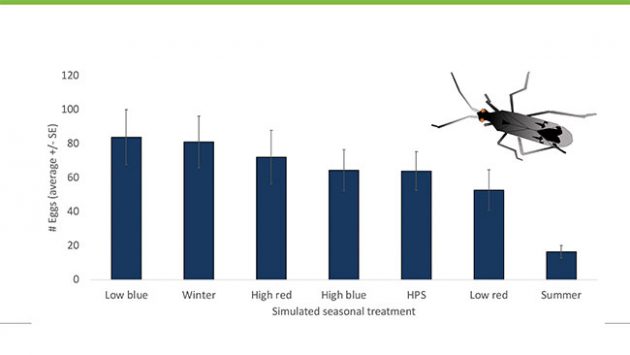 In addition to these studies with predatory bugs, it is also clear that phytoseiids (predatory mites that feed on thrips and other insect and mite species), such as Amblyseius swirskii, are impacted by the light environment. Some similar trends for these predators include the possibility that HPS and high intensity red LED lights provide the fastest developmental times, like those observed under summer conditions. In contrast, mites placed under the remaining environmental test conditions displayed slower development overall. Other ongoing work at the HRDC, relevant to parasitoids of whitefly and predators of western flower thrips, will help elucidate how supplemental light can influence the big picture of greenhouse arthropod population dynamics. This foundational work will be vital to continuing the study of these interactions under commercial growing environments being devised for optimized plant production.

This leads to more questions

Some conclusions that we can draw from our work to date are quite surprising. While many of the insects being studied are not capable of seeing red light, clearly red LED light is still affecting them, often in a positive way. Could it be that these insects are happier on plants that receive lots of readily absorbed red light energy? We think so and hope to evaluate this in future work.

We also noticed a trend with high intensity blue LED light. As with UV light, which is often used to kill pathogens in greenhouse irrigation systems or on the surfaces of objects, high intensity blue light can also be detrimental for many insects. (Note how close blue light is located next to UV light on the light spectrum in Figure 2). A notable study on the fruit fly, Drosophila melanogaster, showed that the short wavelength of blue light, which confers a higher level of energy per photon relative to lights with longer wavelengths, caused mortality to eggs, larvae, pupa and adult flies (Hori et al., 2014). Does this mean that too much blue light is bad for insects? Possibly. Just like UV light, it seems that blue light can be beneficial when applied at low intensities, but detrimental at high intensities or over prolonged exposure. That said, the impacts of blue light are likely to be more pronounced for those immobile life stages of arthropods which cannot fly or crawl away from an undesirable light source.

In addition to the lights we currently work with, there are now many other types of lights available for use in greenhouse and indoor production systems, including ceramic metal halide lighting, as well as LED and HPS lights with new spectral outputs. Each of these light sources and their combinations may impact arthropods in new and unexpected ways. With a well-recognized gap in local food supply during the winter, the current market for grow lights is large and their rate of commercial implementation has never been greater. Providing distinct light spectral outputs, these new lighting regimes could have considerable impacts on biological control agents and pests in production systems. Many types of lights could also fundamentally affect how arthropods interact with their growing environment when used year-round, as seen with the use of UV lights to trap nocturnal moths. As lighting regimes are being optimized for plant production, it is equally important to consider impacts on pathogens, both of which may additionally influence insect or mite populations. These early findings only begin to address existing knowledge gaps, but do help in directing future research. Ultimately, we hope this knowledge will lead to the application of optimized light environments, both for crop production and crop protection.

Catch Dr. Rose Labbé’s presentation as part of the Canadian Greenhouse Conference’s 2020 virtual program on Wed Oct 7 in the 10am session.

Rose Labbé, PhD, is a greenhouse entomologist at Agriculture and Agri-Food Canada, roselyne.labbe@canada.ca. Cara McCreary, MSc., is the greenhouse vegetable IPM specialist at the Ontario Ministry of Agriculture Food and Rural Affairs, cara.mccreary@ontario.ca. Both are based out of the Harrow Research and Development Centre in Ontario.