Features Crop Protection Inputs
What is that caterpillar hiding in my pepper?

The European corn borer may be small. Its impact is anything but. 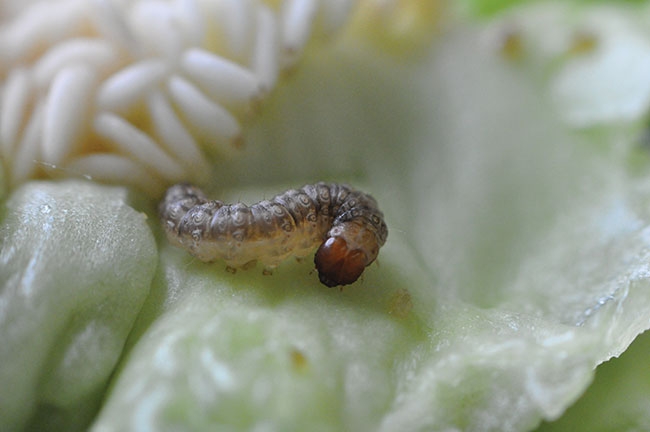 Figure 1. A larva of the European corn borer (ECB) emerges from a greenhouse pepper. All photos from: OMAFRA

The tale of the European corn borer (ECB), Ostrinia nubilalis, is nothing short of interesting. As the name suggests, ECB is a pest of corn and is present in all major corn growing regions in North America and Europe.

They spend the winter outside as fully-grown larvae in corn stubble or other plant material. In the spring, they complete development and take flight, looking for suitable hosts such as corn, wheat, potatoes, hemp and other crops on which to feed and reproduce. But unfortunately, greenhouse peppers may also be one of the hosts they choose.

In peppers, newly hatched larvae (Fig. 1) enter the fruit just beneath the calyx (Fig. 2) and feed on internal tissues (Fig. 3). This presents a significant challenge as the adults are nocturnal (whereby they present themselves at night, when we are all at home sleeping) and the larvae are protected inside the fruit. Unfortunately, this means there is direct damage to the harvestable part of the pepper plant.

Another wrench to throw in the mix, is there may be one generation, two, or even up to four, depending on the location. In Canada, ECB typically completes one to two generations. In the case of Ontario, there can be areas that experience an overlap of these generations. So why does it matter? The simple answer is, that the more generations there are, the greater the population may be. In other words, locations that have two generations will see a greater number of ECB in the second generation compared to the first.

European corn borer pheromone races
Let’s talk about pheromones for a minute. Pheromones are chemicals released by individual insects that induce certain behaviours of other individuals. For example, a female ECB may release a sex pheromone that encourages other males to seek her out. The discussion of pheromones leads to another unique point about ECB. There are two different pheromone races of ECB that co-exist in the United States, Canada, and Europe: The E-race and the Z-race. There is also a hybrid race that has evolved from the mating of E- and Z-race individuals that respond to a slightly different pheromone blend than the E- and Z-races. Interestingly, pheromone race may influence host preference. Some evidence suggests that the Z-race prefers corn and the E-race may also go to other hosts if available. There is also speculation that the Z-race population has been significantly reduced in North America due to the use of Bt corn. This may have allowed the E-race to become more prevalent and is more likely found in other crops such as greenhouse peppers.

Figure 1. A larva of the European corn borer (ECB) emerges from a greenhouse pepper.

Monitoring with degree day models
The good news is, we can predict the flight of ECB by keeping track of degree days (i.e. heat accumulations). Degree days are calculated using average daily temperatures and subtracting the lower developmental threshold (i.e. the minimum temperature at which a given species can complete its life cycle). In the case of ECB, the lower developmental threshold is 10 degrees Celsius. To calculate daily degree days for ECB, you can use the following formula:

(Note: if the maximum temperature is below the lower developmental threshold, this will result in a negative number and ECB cannot develop.  Therefore, the degree days for that day will equal 0).
Degree day calculations begin on April 1st of each year. Degree days accumulate over time and these accumulations result in predictable events such as first moth catch, peak flight or end of flight for adult ECB moths. An example is shown in Table 1. With this information, we can maximize the effectiveness and efficiency of management tactics.

Managing the little critter
Monitoring is a critical part of ECB management. This can be done by diligent scouting, light traps or pheromone traps (Fig. 4). As we lean towards an integrated approach, trapping can also be used as a form of physical management. After all, every moth that is captured is not mating or laying eggs. Additionally, degree-day tracking can guide the timing of trap usage. As the degree days approach the predicted first catch, traps can be set up. Until you can determine which race is dominant in your area, it is best to set up a trap for each ECB race. When using pheromone traps for each race, minimizing cross-contamination of pheromone lures is crucial to achieve the best results.

So what’s the take home message? Figure out how many generations and which race(s) are present in your area. Traps will help you to determine which ECB race(s) is in your area and whether you experience one peak flight (one generation) or two peak flights (two generations). Begin monitoring degree days on April 1st and scout for first moth capture, eggs and larvae to determine if growing degree days are predicting the stages accurately. Use the correct pheromone blend based on your ECB race. And watch out for those elusive little caterpillars hiding in your peppers.

Cara McCreary is the greenhouse vegetable IPM specialist, and Tracey Baute is the entomologist for field crops with the Ontario Ministry of Agriculture, Food and Rural Affairs (OMAFRA). For more information, contact Cara at cara.mccreary@ontario.ca.