After four decades, three venues and countless talks from world-class speakers, the Canadian Greenhouse Conference remains the place to be for growers of all crops under cover. 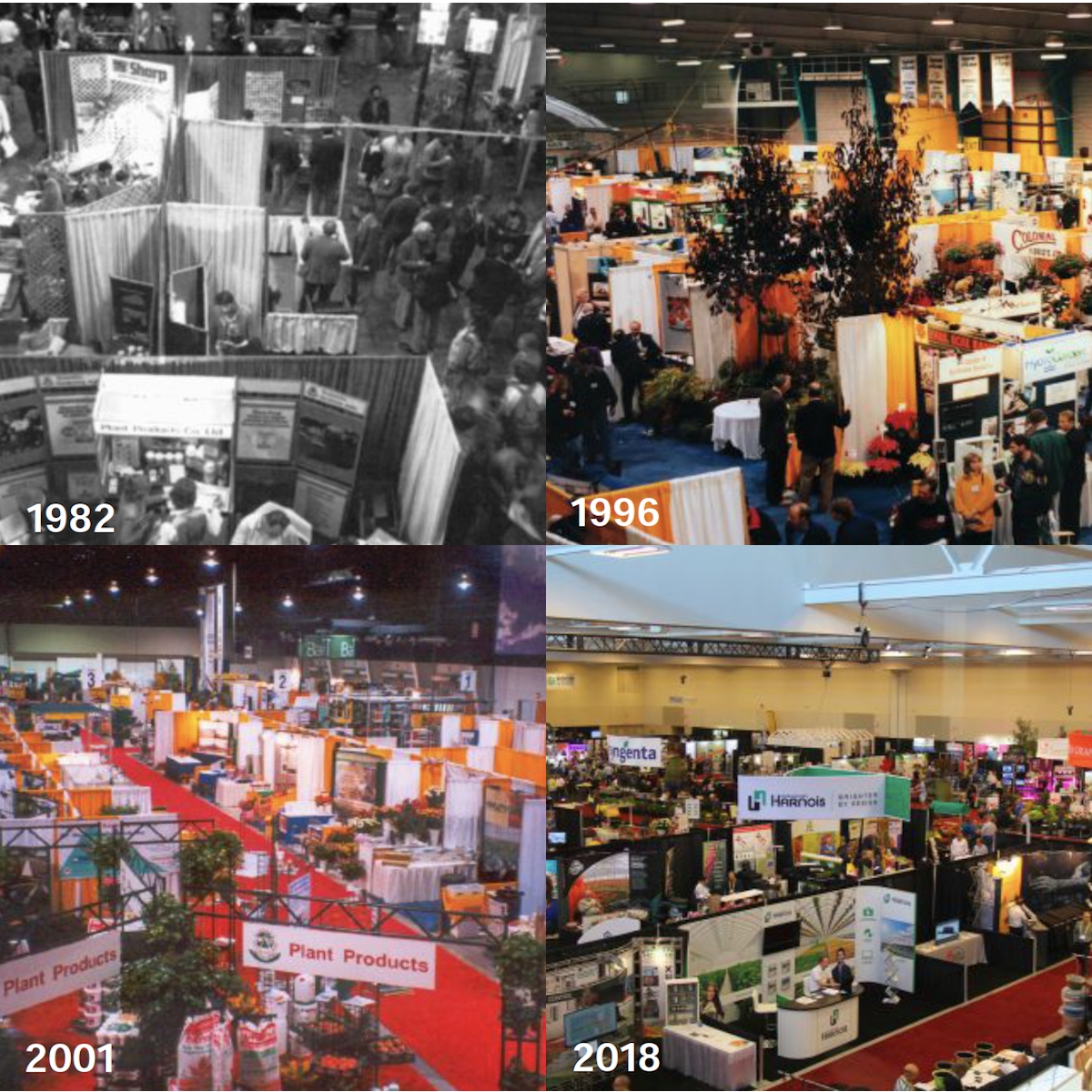 What first began as an idea to consolidate many small, local meetings scattered across Ontario has grown into so much more.

“One month in Peterborough, the next in Brantford, then the next in Leamington—there seemed to be a lot of time spent organizing meetings in different locations,” recounts Dr. Theo Blom, former greenhouse floriculture extension specialist and research scientist with the Ontario Ministry of Agriculture and Food (OMAF) and retired faculty member at the University of Guelph.

As ideas of creating a more centralized meeting spot began to take shape, horticultural suppliers were also in search of a common venue where the industry could gather and show their latest offerings.

“On the OMAF side, John Hughes already had organized grower meetings in Guelph,” says Blom. With a little extra space, and in cooperation with members of the allied trades and the University of Guelph’s horticultural department, Hughes’ venue eventually accommodated a trade fair portion as well, setting the stage for the first annual Canadian Greenhouse Conference (CGC) in 1979.

Landing in all the right places
When the CGC first started, the organizers were all volunteers, juggling their daytime workload with conference duties. Key instigators were members of BPI (Bedding Plants Incorporated), OMAF, allied trades, the University of Guelph’s horticulture department, Ontario Greenhouse Vegetable Growers and Flowers Canada (Ontario).

But as the conference grew in size, organizers realized they needed full-time help to have the logistics done, the bills paid and the marketing deployed. That’s when conference coordinators Donna and Bob Cobbledick were hired, one after another, in 1987 and 1999.

“The original CGC was held in the University Centre at the University of Guelph with the trade show and talks held in the single building,” says Shalin Khosla who was involved in the first CGC as a graduate student. Now the OMAFRA greenhouse vegetable specialist, he has since spoken at the CGC and serves as a key member of the CGC trade show and executive committees, organizing the vegetable speakers program and bus tour.

“It was quite popular,” Khosla continues, describing the first CGC, “and over the years expanded to include temporary greenhouses between the University Centre and the Engineering Building and eventually was moved to the hockey arenas and the gym.”

But after 22 years at the university, demands on parking and facilities became less manageable as the conference outgrew the venue. In 2001, the CGC made the decision to move into Toronto’s International Centre—without losing attendees as organizers had originally feared.

It was a lot easier to set up, Blom says of the venue. No outdoor greenhouses needed to be built, but at the same time, there were no restaurants or services near the venue where attendees could gather for meals or socialize beyond conference walls. The building didn’t quite convey the right character for the show either.

Over time, organizers noted a decline in the number of exhibitors. As CGC executive coordinator Carol Pupo remembers it, the Cobbledicks were instrumental in moving the conference to Niagara Falls when its convention centre first opened in 2011, a year after Pupo succeeded Donna Cobbledick’s role. Bob retired soon after, welcoming Glenna Cairnie as the new marketing and events coordinator.

The move to Niagara was the biggest change for the CGC in its 40-year history, says Blom. Andrew Morse couldn’t agree more. Now executive director of Flowers Canada (Ontario) Inc. and a member of the CGC trade show and executive committees, Morse first attended the CGC in Toronto as a graduate student. Looking back, he sees how moving to Niagara was an opportunity for growth.

“The quality of services is far better, it’s closer to the producers—it’s a much easier sell for people to come attend the show,” he says, citing examples such as offering free parking, having coffee and sandwiches during set-up periods, easing the booth-cleaning process and addressing exhibitor concerns—small details that make a big difference. “A lot of trade shows don’t make it easy to attend.”

Growing with the industry
Along with former OMAF greenhouse floriculture specialist Wayne Brown, Blom is one of the longest-serving members on the CGC trade show and executive committees. But when he first became involved with the conference in 1979, the greenhouse vegetable industry was in turmoil.

“There was an oil crisis, prices were going through the roof, [and] we had a big snow storm in Leamington. Everybody said this was the end of the greenhouse vegetable industry,” Blom says. “Guess what? 10 years later, it started to pick up again. Double poly greenhouses started to become popular and [the industry] has been expanding since.”

As the sector continued to grow, so did the CGC’s educational programming, addressing new vegetable crops like peppers and seedless cucumbers, novel potted flowering varieties, as well as new production technologies in computerized control, IPM and substrates, among others. Changes seem to happen in the industry about every five to 10 years, and the CGC’s programming has continuously evolved and stayed in step, each influencing the other.

Chevonne Dayboll, OMAFRA greenhouse floriculture specialist and member of the CGC trade show committee, describes the conference as being “bigger and bolder” than it was before. “It has branched out from focusing solely on ornamentals and vegetables to including resources for new and emerging greenhouse crops, such as berries and cannabis,” she says. Organic production and vertical farming have also been trending over the past three to four years.

From her position as OGVG’s science coordinator and a member of the CGC trade show and executive committees, Niki Bennett can’t help but notice the rise in participation from greenhouse vegetable operations. There’s particular interest in physical technologies common to greenhouse floriculture, such as water treatment, lighting and climate control. Participation from nurseries and allied sectors have also climbed over the years, seeking to make use of similar practices and technological solutions to ease related issues.

Crossing the global frontier
“It’s not as Ontario-centric as it once was,” Morse observes, “with attendees coming from western and eastern Canada, as well as from the U.S.”

For greenhouse vegetable growers, Bennett says there aren’t many other shows that are comparable on the production side, especially in North America. While growers of larger operations may make the trek to the Netherlands, there are smaller crop protection workshops scattered around greenhouse-rich regions of North America, but they tend to be segregated by crop. The CGC has them all in one space.

Blom, however, reveals a little known fact. Back when the CGC was held at the University of Guelph, there was much research being done on supplemental lighting by Dr. Jim Tsujita, he
says. HPS lighting was first developed for cut roses in Ontario, and consequently drew a number of curious European visitors. Now, it seems that the conference’s reach has once again crossed overseas.

“We’re seeing an increased number of exhibitors from Europe, particularly from the Netherlands,” says Pupo, crediting the vast geographic reach of online news outlets such as HortiDaily.

A place in the information age
40 years ago, meetings were essential. Without books available on topics such as bedding plant production or cut flower production, growers had to convene somewhere for this information. Fast forward a few decades and books are seemingly on their way out—at least in their physical form. “Information has become much more available all over the world,” says Blom, referring to the advent of the internet, the ease of global travel and social media.

“When people started here, they were basically pioneering certain crops,” he continues. But now, when people spot something new or different, they can use the internet to find out who’s involved in different parts of the globe, and get in touch right away with other producers.

“It’s a lot more direct than it used to be.” The value of the conference then, stems from gaining curated, unbiased information, and many times straight from the primary source.

There’s a continued need to understand the basics in order to gauge whether new information makes sense for a grower’s operations, Blom explains. For instance, a grower looking to adopt new LED technology may need to first understand di.erent aspects of horticultural lighting, such as light quality, intensity and so forth, before asking the right questions and having meaningful conversations with a supplier.

With the newest technology on the trade show floor, and the latest in greenhouse knowledge delivered by conference speakers, these ingredients create the perfect environment for sparking new ideas. The set-up allows attendees to meet the speakers and exhibitors, says Khosla, while at the same time, growers can exchange ideas and develop partnerships that are not only helpful to the individual attendees, but to the greenhouse sector as a whole. “I believe it will continue to remain the Canadian destination for the greenhouse sector to learn, exchange ideas, and develop long-lasting relationships.”

Unwavering values
Unlike some larger trade shows, the CGC isn’t looking to generate revenue for itself. “Our purpose was to get the information to the growers and the people involved in the industry,” says Blom. The conference has clearly continued to uphold those values, keeping the event entry fee relatively low, such that operations of all sizes can attend.

If you look at how much it costs to put on the conference compared to what attendees pay, says Blom, the ratios are completely out of proportion. For a typical horticultural trade show, admission costs between $200 to $400. Meanwhile, the cost to attend the CGC is on the order of $85 for two days—a very high value for the attendee.

The show is financially successful, say both Pupo and Cairnie, but what others may not realize is that any surplus revenue is reinvested into research and education to further support the industry. They estimate that well over one million dollars have been awarded in the form of research and educational grants to not-for-profit organizations on topics related to flowers, vegetables, and more recently, on soft fruit and cannabis.

As with every trade show and conference, socializing and catching up are essential, particularly for those separated over long distances—but there’s something different about the CGC.

“We are big enough to matter, small enough to care,” says Cairnie. “The vibe of the CGC is so collegial, warm and inviting.” For their part, Pupo and Cairnie ensure that speakers, exhibitors and attendees are given one-on-one attention. Even the décor is no exception.

For over 30 years, Grace Dekker has been the lead designer in decorating the CGC venues, often reflecting popular trends and colours that year, says Pupo. “The investment in décor is second to none.”

For Dayboll, the conference brings all the resources for the Canadian greenhouse sector under one roof. Whether it’s gaining new information, receiving research updates, networking with suppliers or making new contacts, it’s an event well worth attending. “Our reputation for a great speaker program and a wide variety of exhibitors will help the conference to grow and continue to be a place where innovative ideas are shared in the future.”

“Not many farms will be willing to step away during the season,” says Morse, but the CGC helps them find more opportunities for their businesses. As to why the CGC seems to hold a special place among the Canadian industry, Morse sums it up quite nicely. Current research, current trends, close to home and reduced barriers to entry. “It’s all synergistic.”

Thank you to CGC trade show and executive committee member Rodger Tschanz for sending decades of photos, and to Carol Pupo, Glenna Cairnie and Dave Harrison for contributing their favourites. Some were sampled from past issues of Greenhouse Canada and Canadian Florist.