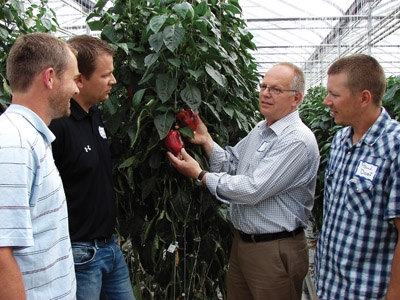 Alberta is a challenging environment for growing commercial greenhouse produce because of its cold winter climate, but a Lacombe-area vegetable producer has imported Dutch technology as part of a $7.5-million expansion that will tame Old Man Winter through more efficient use of heat, air and light.

To help finance the expansion, Doef’s Greenhouses Ltd. has received a $2.2-million federal government loan through the Agri-Opportunities Program to complete construction of a greenhouse expansion from five to 11 acres. Construction will be completed this November.

Cees VandenEnden, an industry consultant who worked extensively on the project, believes the technology implemented at this greenhouse could very soon become the standard in Canada because of its obvious benefits.

QUICK PAYBACK EXPECTED ON MANY OF THE TECHNOLOGIES
■ “I expect that within the next two years, any expansion will adapt some or all of this technology,” he says. “For certain parts of the investment, we have calculated a payback of between three and four years. Although some of these investments are seven-digit numbers, if you can make it back in three or four years, in my opinion, it’s a no-brainer.”

VandenEnden owns Hortisource Consulting Inc., a crop consulting firm headquartered in Water Valley, Alberta.
He acknowledges, however, that because the outcomes from combining all these technologies are not yet known, there will be a learning curve, which is why the greenhouse has given itself three years to meet its projected production targets.

Doef Greenhouses president Joe Doef says the expansion will result in year-round production of English cucumbers, and will about double annual production compared with other traditional commercial greenhouse systems using no lights. The company estimates that within three years, it will pick about 300 English cucumbers per square metre per year, a total harvest of about 6.3 million cucumbers. Moving cucumber production to the greenhouse expansion will free up four acres currently under lights, which will allow the company to also produce two acres of tomatoes and two acres of mini-cucumbers year-round.

One screen will help trap heat in winter and the other will prevent light from projecting outside at night. The system retains 99 per cent of the light energy inside the greenhouse.

Doef estimates that by closing both screens, the greenhouse will achieve over 60 per cent of its energy needs, with some of the heat energy coming from the light ballasts. And in summer, the screens can be closed to shield plants from overexposure to harsh light on sunny days.

The screens were provided by the Dutch firm Ludvig Svensson BV, with assembly parts provided by PDI, another Dutch company.

CIRCULATING WARMER AIR UNDER THE CROPS
■ The expansion project includes the installation of a Vertifan vertical air circulation system. The system circulates warmer air from the top of the greenhouse and distributes it under the crops to maintain targeted temperature and humidity levels, which help the plants grow better. It also makes use of heat that is normally vented off, resulting in less demand on the heating system.

“It’s the same idea as ceiling fans but the air is blowing down through plastic tubes so that the growing plants will not get damaged,” says Doef.

He notes that the greenhouse structures have been getting taller over time, starting at about 10 feet and now climbing to about 23 feet. The fans will help maintain an even temperature from top to bottom. It is estimated that by using this system, the temperature differential from top to bottom will be less than one half of one degree. The system was supplied by the Dutch firm, Van Der Enden Pompen.

DIFFUSED GLASS ETCHED USING NANOTECHNOLOGY
■ The greenhouse has also installed diffused glass that has been etched using nanotechnology, resulting in very evenly spread light that penetrates deeper into the plant canopy. The result is more crop production and better quality. The glass provider is a Dutch company called The Glass Company.

“This is the first time many of these technologies have been installed in North America,” Doef says. “The new innovations come from different places, but we put it all together. The height of the greenhouse together with the misting system and the hanging growing crops, as well as the use of carbon dioxide from our efficient boiler will all help to create an optimum growing environment.”

The greenhouse, which currently employs 25 workers, will add 15 new positions and another three or four at the company’s processing facility.

HELPING GROWERS CAPITALIZE ON NEW OPPORTUNITIES
■ Regarding Ottawa’s support for the project, Wetaskiwin MP Blaine Calkins, who grew up just a few kilometres north of the greenhouse, says the federal government wants Canadian farmers to capitalize on opportunities as they arise to stay ahead of the curve.

The Doef family is well acquainted with current Dutch greenhouse technology, as Joe immigrated to Canada from the Netherlands in 1969. He says that although Holland has a warmer climate than Canada, it is located near the same latitude, so it receives about the same amount of sunlight, meaning that many of the technologies, particularly those related to light diffusion, should function just as well in Canada.

Doef owns the business with sons Eric and Paul, and son-in-law Phil Visscher. The main motivation for the expansion was the interest shown by the family’s second generation to maintain and improve on the business, which was started by Joe in 1970. He says he is pleased with the interest shown by his children because his parents had to sell their flower bulb business in Holland, as there was no one to take it over when they retired.

COMPANY IS A VERTICALLY INTEGRATED ENTERPRISE
■ Doef’s Greenhouses is a vertically integrated enterprise, with the company owning a 25 per cent share in a marketing/distribution company called Pik’N Pak Produce, which processes and bags produce from four area commercial greenhouses. It is also a 20 per cent shareholder in Sunfresh Farms, which markets the majority of the company’s production on a client list that includes 25 area retail stores.

Tony Kryzanowski is a freelance writer and photographer in Alberta.