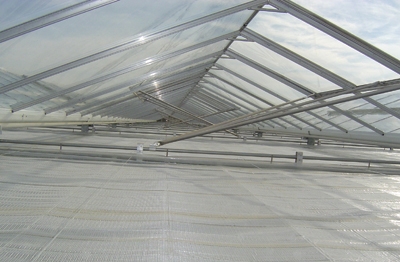 the attic created above a screen helps save energy by reducing conductive and infiltration heat losses.

Canada is a major producer of greenhouse tomatoes, peppers and cucumbers in North America. Greenhouse vegetable production is energy intensive. Growers have been installing thermal screens/curtains in glasshouses for years.

Flower growers have been using screens in double-polyethylene-skinned houses for decades. The practice is increasingly being adopted by vegetable growers in plastic houses. It appears that the technology will become standard equipment for professional vegetable growers in the next few winters regardless of glazing type. This overview is for those still considering energy screens.

High and low temperature extremes indicate the size of boiler and cooling that will be required for each climate as “delta T,” or the ability to achieve a temperature change compared with ambient. Average high and average low temperatures are typically a monthly average for the most extreme month. Note that temperature extremes can vary significantly from averages. Investments should not be based upon extremes but there should be contingencies in place for dealing with them.

Heating degree-days and cooling degree-days are used by designers to compare different regions. This table represents average degree data from the past three years. You can see that the Leamington grower area requires about 25 per cent more heating than the delta area in B.C. and that the Montreal region requires 25 per cent more heating than Leamington. More data than three years would provide conditions that could be considered “typical.”

Annual degree data can be used to evaluate year-to-year fuel consumption and efficiency improvements. That is, one can only compare energy use performance year to year if comparing to the year’s specific winter weather and unit fuel cost.

The climate of British Columbia in the delta area west of Vancouver is remarkably similar to that found in southwestern Holland. As a result, greenhouse cultural practices and equipment can closely follow the experience that has been generated in the Dutch climate. Most greenhouses in British Columbia, not surprisingly, are glass.

In Quebec and Ontario, where the climates are more extreme, double-glazed houses are predominant. More recently, glasshouses are gaining favour with growers who seek higher light transmission and can manage energy costs with screens.

Higher light transmission in climates with warm, bright conditions will have cooling implications. What does not always reveal itself in climate data is weather. Monthly temperature data will not show that the emergence from winter in western Ontario presents growers with bright blue, clear skies. Night temperatures may still be rather low but this sudden, high radiation creates large diurnal temperature swings and significant challenges for growers.

Screen selection and operation will be dependent on the local climate conditions and represent a tool for helping to manipulate the greenhouse climate and soften temperature extremes.

GREENHOUSE VEGETABLE CROPS
■ Whereas energy is an important resource and cost of growing greenhouse vegetables, fruit quality and yield are of primary importance. Temperature, relative humidity and cumulative light are three major factors in determining plant output. All three factors can be influenced by a thermal screen.

Regardless of location, crops thrive when temperatures favour fast reactions, light is sufficient for high photosynthetic output, and humidity is sufficiently high to limit transpiration but sufficiently low to prevent wet, disease encouraging conditions. It is important to harness these factors to prevent conditions that can negatively impact yield.

The most detrimental climate conditions are those that lead to a wet crop where botrytis and other diseases can thrive. Very cold weather is usually associated with dryness and cold greenhouses do a good job of dehumidification. However, cold, cloudy rainy weather that can be typical of late winter or early spring can be difficult to cope with. An effective method of managing climate away from dangerous conditions is with vapour pressure deficit monitoring and control. In conjunction with heating and cooling, a climate screen can be used to manipulate canopy temperature and relative humidity.

ENERGY/SHADE CURTAINS
■ The main benefits of greenhouse climates screens are: decreasing heat loss rate and increasing leaf temperature by providing a warm overhead surface. Heat loss is slowed by interrupting various modes of heat loss, conduction, conduction/convection loop, radiation and infiltration. A barrier is created and a cold attic is created. The cold air trapped above should be gradually mixed into the growing zone in the morning to prevent condensation on the crop.

For example, one would cover the crop when energy consumption is great, solar radiation is too intense, or humidity is too low.

Climate screens are made of composite materials, as opposed to a film, which would have homogenous properties. A greenhouse screen is typically a composite array of plastic films and aluminum foils.

Various types of plastics can be used to capture material property benefits of PAR light transmission, infrared radiation absorption or light diffusion. Aluminum foils can be used for both solar radiation reflectivity (shading) and low thermal radiation transmission (energy saving). Greenhouse climate screens should be a textile, which is a flexible material made up of fibres. The flexibility is important for packing the screen away when it is undesired and the fibres, or yarns, are critical for dealing with moisture. It is beneficial to select a screen or combination according to specific conditions: energy price, crop value and climate.

SCREEN OPERATION
■ The best time to cover or uncover a thermal screen is when the gain from photosynthesis due to higher PAR transmission when uncovered is equivalent to the gain from heat energy conservation when covered. In general, a thermal screen should be in the covered position during the night when there is no useful light available.

Climate computers generally calculate the activation moment and the value of crops and fuel vary, but this generally occurs within 30-50 W/m2 of solar radiation reaching a location representative of the crop. Extended daytime use of transparent thermal screens is prevalent in some regions, especially Europe, where taxes and peak hour rates make energy very costly. It is beneficial to operate a screen according to specific conditions: energy price, crop value and climate. ■

KEY POINTS TO PONDER
1. Appropriate material selection is important to achieve the most important benefit.
2. If energy savings is paramount and the screen will only be used during the night, ignore light transmission and favour more energy-saving versions.
3. A screen can be used to elevate night temperature but also reduce daytime temperature.
4. Consider cooling requirements and whether the primary screen can also provide sufficient shading.
5. Multiple layers of screens can be used.
6. If two screens are of closed construction, consider moving them in opposing directions so that natural roof ventilation can be employed while in shading mode.


Related
A ‘greener’ greenhouse: In addition to fuel bill savings, there may be some tax breaks
Conservation focus grows
Inside View: Being keen on green with LEDs… or LEEDs
OFA, and the need for green energy promotion