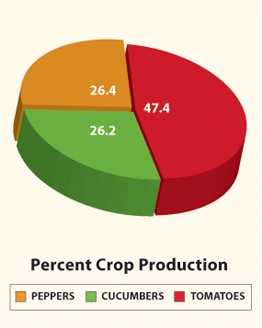 Ontario vegetable growers optimizing measures to save on fuel costs

Natural gas prices may be lower than they were just a few years ago, but energy remains a hot topic for Ontario greenhouse vegetable growers.

Growers know it’s a question of “when,” not “if,” natural gas prices will increase again, and how steep they will rise is anyone’s guess.

Growers are being proactive about their energy plans. Money saved by lower natural gas fuel bills is being invested in conservation measures.

“Energy is always a big concern for growers,” notes Shalin Khosla, greenhouse vegetable specialist with the Ontario Ministry of Agriculture, Food and Rural Affairs. “They’re incorporating as much energy conservation and energy efficiency measures as possible.”

THERMAL CURTAINS POPULAR WITH BOTH GLASS AND DOUBLE POLY
One key area is the installation of thermal curtains. “Every new glass greenhouse has them,” notes Khosla,” and some have double screens. There is a greater interest with double poly greenhouse installations.”

Many older greenhouses are also being retrofitted with thermal curtains, both glass and double poly. Properly used, they can save up to 25 per cent.

“One of the other things we’ve looked at, and been quite successful with, is placing a temporary plastic film over a young crop,” Khosla explains. “Growers have been very happy with the plant response.”

Number one, it provides energy savings. But because greenhouses can normally be quite dry in the early season, the film has the added benefit of creating a more humid growing environment, and this results in more lush plant growth.

Growers have to remove it at the right time. “If you take it off too early, you’ll lose out on energy savings,” says Khosla. But leaving it on too long will expose the plants to too much humidity, affecting crop performance and increasing disease pressures.

Peppers and cucumbers do quite well with it.

INDUSTRY GREW BY 28 HECTARES LAST YEAR, BRINGING ONTARIO TOTAL TO 753 HECTARES
With respect to the Ontario greenhouse vegetable industry as a whole, some 28 hectares were added in 2009, bringing the provincial total to 753 hectares.

The new construction was split between glass and double poly. There’s no “clear-cut winner,” between the two, says Khosla, who adds that “it’s about grower preference.” There are advantages with both of them, and both produce well “as long as they’re handled correctly.”

One of the advantages of glass is that crops come into production about a week to 10 days earlier. However, some growers feel double poly affords better heat buffering in the summer.

The popularity of raised troughs, thermal screens and hot water heating are continuing trends in the sector.

All of the 2009 projects included raised trough systems for water recycling and improved water management. The majority of the new construction featured hot water boilers.

Of the new acreage in 2009, about 50 per cent was in peppers, the remainder in tomatoes.

Eggplant is gradually moving into the production cycle, “but it is still a niche-type market.”

ONE TREND IS THE INTRODUCTION OF A NUMBER OF ‘MINI’ VARIETIES
One trend we’ve noticed is the attention to “mini” varieties. It began with cocktail and grape tomatoes a number of years ago, before the addition of mini-cucumbers more recently. There has even been trialling of mini-eggplants. The latest additions are mini-peppers, and there has also been some research with cocktail cucumbers.

“The general trend,” says Khosla, “is to provide as much variety as possible.”

Back on the fuel front, the relatively low prices of natural gas – low, at least, compared to a few years ago when prices were spiking – has caused some growers to back off looking at alternative fuels. However, those with alternative fuel systems are working to improve their efficiency, to get a bigger bang for their buck.

Growers relying on natural gas are investing in conservation measures “so that when prices go up, they’ll be in better shape.”

One of the more innovative alternative fuels projects in Ontario is now under construction, with plans for a late-fall startup.

Seacliff Energy Ltd. is building a state-of-the-art, leading-edge anaerobic digestion facility in Leamington. The system will utilize organic material to produce methane gas, which will then be used in an onsite cogen system to produce electricity to feed into the Ontario power grid. The heat will be used by the adjacent Pelee Hydroponics greenhouse tomato farm.

The benefits don’t stop there. After the methane processing, the organic material will be used as a natural fertilizer.

Dennis Dick, owner of Pelee Hydroponics, and Roger Tiessen, a longtime area businessman, are partners in Seacliff Energy Inc. They began studying alternative fuels about four years ago before settling on anaerobic digestion. The technology is well proven and quite popular in Europe.

“It’s a mature industry there,” Dick explains. “They’ve been doing this for over 20 years profitably.”

All levels of government – the local municipality, the province and the federal government – have been supportive of the project.

Ontario’s Renewable Energy Standard Offer Program (RESOP), now known as the FIT (Feed-In Tariff) program, has been a major boost to the project. The Ontario Power Authority introduced RESOP in November of 2006 to encourage the development of renewable energy generation. The program was intended to remove obstacles for smaller renewable projects through a simplified procurement process while providing a fair and stable price for a 20-year term.

For its part, the federal government last year contributed a repayable contribution of up to $1.6 million to help with the project.

“This is a new technology to Ontario,” Dick explains. “We’ve had to prove the economics, and show that it would be as successful here as it has been in Europe.”

With this system, nothing is left to waste. It’s an environmental winner in so many ways. It’s helping Ontario in its quest for renewable fuels for electricity. The “waste” heat will be used in the greenhouse. The processed material can be reused as a fertilizer.

“There are so many upsides to this,” says Dick, along with some potential applications “we haven’t even considered yet.”

“This project began with us looking for an alternative heating source,” says Dick, “and now the heat is a byproduct.” The electricity generation component of the project “has become the profit centre.”

Anaerobic digestion isn’t the only answer to Canada’s energy challenge. It has a part to play alongside solar panels, wind turbines and other forms of biomass. These can all help displace our reliance on fossil fuels, says Dick.

The project will generate some 1.6 megawatts of electricity in its first phase now under construction, with another 1.6 megawatts in a potential second phase.