Is it possible to comply, without sacrificing productivity and efficiency? There are options. 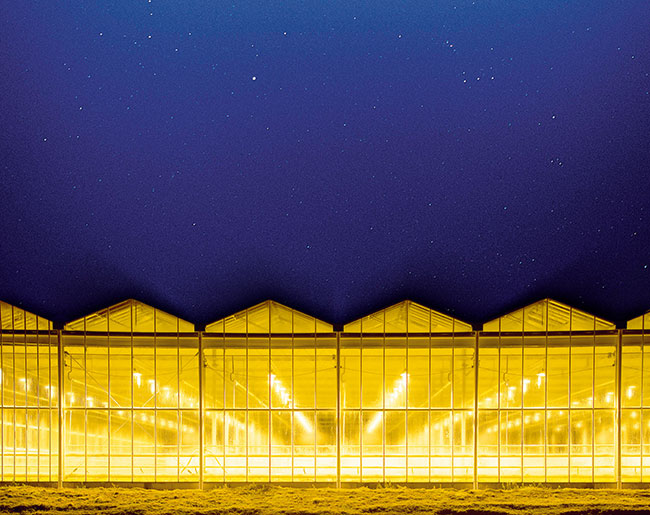 Canada’s low light and temperatures translate to a high light, high temperature requirement for greenhouse crop production. So what are growers to do, when light abatement bylaws impact not just the way they grow but the way their crops yield? In short, adapt and overcome.

In Oct. 2020, the town of Kingsville, Ont. enacted light abatement bylaws, and in December, Leamington followed with its own requirements. Leamington’s bylaw mandates complete closure of light abatement curtains on greenhouse ceilings, sidewalls and endwalls one hour before sunset until one hour after sunrise, allowing a 10 per cent gap between 2 am and 6 am. (The provision on sidewalls and endwalls went into effect on Apr. 1, 2021, while the provision on ceiling curtains begins Oct. 1, 2021.) Meanwhile, the regulation in Kingsville does not allow any light to “shine upon the land of others” or “into the dark night sky.”

Municipalities are implementing strict bylaws for greenhouse horticultural operations that are artificially lighting their crops to extend their growing seasons. Investments in light abatement screens not only provide these operations with the necessary resolve to contain the light but to also reduce their energy costs. To the municipalities, it seems a simple solution, but growers know the challenges are many. The good news: growers can comply with light abatement regulations without compromising crops or the growing climate, although adjustments to the growing strategy may be needed.

What can growers do to keep the light inside the greenhouse, and also use it in an optimal way for the growing process? They can’t eliminate the issues, but they are able to manage them, just in a slightly different way than they’re used to.

Light abatement blackout screens can be used to contain supplemental lighting. This is one way to comply with light pollution regulations and to keep neighbours satisfied. Furthermore, they can provide light deprivation for daylength control on the most sensitive of plants, such as cannabis, chrysanthemum, and kalanchoe.

There are several available options: horizontal screens for the ceiling and vertical options for gables.

“These screens aren’t just plastic strips; they’re knitted together with yarn, and although it might look like just one yarn, in fact it is a bundle of thin yarns,” says Habraken. “The bundle of yarns can absorb the humidity to help dehumidify the greenhouse. They are specially designed to provide high humidity transport.”

In a greenhouse measuring 20°C and 80% relative humidity (RH) below the screen, and measuring 10°C and 80% RH above the screen, Svensson’s studies show that the Obscura 9950 can transmit water at a rate of 47 g/m2/h. That’s quite a lot of humidity, especially if a tomato crop at rest, without artificial light or a heating pipe to activate it, produces half that amount of water at 20 to 24 g/m2/h.

Managing those factors is critical, says Lars van Baar, a Dutch grower who has been producing tomatoes under light abatement regulations for 10 years. “You need a strategy for when there are temperature extremes and you can’t vent the greenhouse,” he says. “You have to deal with the temperature.”

The main driver of humidity transfer through the screen is the difference in absolute humidity (AH) above and below the climate screen, says Habraken. Using the same greenhouse conditions described, the AH difference is 6.5 g/m3. This means a possible humidity transport of 47 g/m2/h for the Obscura 9950 FR W.

However, when a greenhouse is heated, the crop’s humidity production will be much higher. If greenhouse lights are on as well, it is a much different circumstance. Humidity is not an issue when the screens are fully open or when they are gapped. Once the screens are fully closed and the lights are on, heat collects in the top of the greenhouse, causing a vertical temperature difference, which in turn causes an imbalance in crop growth. 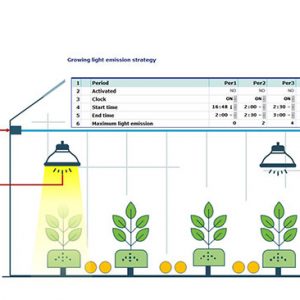 Curtain positions can be activated based on greenhouse conditions and time. Any gaps should come in gradually to avoid compromising the greenhouse climate. (Values are for illustrative purposes only.) Image credit: ACT 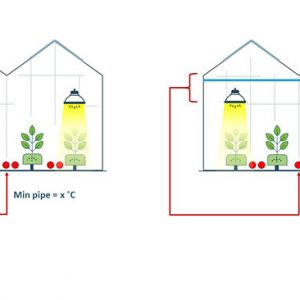 Adjust minimum pipe temperatures to manage any imbalances caused by light abatement. Programming can be specific to screens open (left) or closed (right)

To get rid of the extra heat and humidity that comes with closed greenhouses, the simplest solution is opening the screens and vents – but not all light abatement bylaws allow that. “So, to get rid of the extra humidity, growers can open the vents above the closed [light abatement] screen, until the humidity gets too high and the heat is too much,” says Paul Jense, technical trainer and horticultural consultant for Priva. “You’ll also want to have a pipe to heat the bottom of the crop so there isn’t a difference between the roots and the top of the canopy.”

Another strategy is shifting lighting phases. For example, if bylaws allow gapping at 2 am, shift the lighting period to start just before that time. “Switch on half the lights just before 2 am, then switch on the second half when you are allowed to have a gap at 2 am, so you have the full power of the lights,” says Habraken. “This way, you bring the lights a little further into the evening, but when the lights are off, you can gap the screens partially or fully to reach the pre-night temperature. This could be a solution for the Leamington area. In Kingsville, it might be a good idea to switch the lighting period to a few hours later so you can use the coolness of the night to get a lower 24-hour average temperature.”

Climate control with light compliance
Climate control is still possible with light abatement, says Jense, with a few considerations. “If you are allowed to have a gap in your screen, make sure the gap comes in gradually, and that your computer is configured as such,” he says. “You can lose your climate in just a few seconds if it isn’t introduced gradually.”

Even if a gap is possible, it is still critical to manage the greenhouse climate carefully. To manage the vertical energy imbalance caused by the increased heat that comes from lights and the decreased pipe temperature under a closed screen, Jense suggests implementing a higher minimum pipe temperature. “When you have your curtain closed and lights on, you need an alternative strategy or correction to your setpoint,” he explains.

In turn, this may create another challenge, Jense says, but he has a solution. With the lights on, the crop is very active. Temperature and AH are both high. At some point the plant can’t get rid of its humidity anymore, and growers need to open vents. It’s critical to do that carefully.

There is a downside to adjusting this way, however. At some point the grower doesn’t know whether it’s too much or too little, because it only controls the minimum vent position. “Perhaps a better approach would be to adjust your proportional band (P-band),” Jense says. “That decides how aggressively your vents will react. A smaller P-band translates to more aggressive vent opening. With a smaller P-band, you could have 50% vent position, for example, compared to 10% with a larger P-band.” 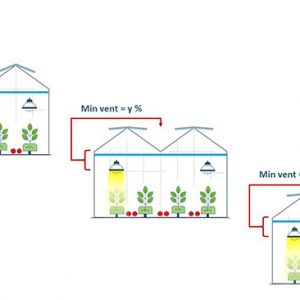 Minimum vent openings can be set based on curtain positions, lights and other measurements, but Jense says basing it on the P-band may be a better bet. Image credit: ACT 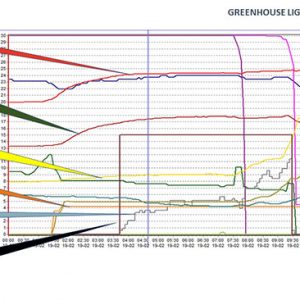 Screen shot of a customer’s actual greenhouse system. Note that as the light switches on, the temperature increases and AH increases. As the vertical fans mix the air (boxed area), greenhouse temperature and AH stabilize below the curtain.

Unfortunately, growers aren’t always able to open their vents, or they are limited in their ability to open the vents, such as with storms or rain. Gapping the screens can also cause huge temperature differences in the greenhouse, due to warm air rising above the screen to the attic, cooling down against the cover and traveling to the lowest point, causing a cold draft on the crop. In fact, it can cause a horizontal temperature difference – as much as 5 °C. Heating and lighting can accelerate that. With screens fully closed, growers can make full use of the reflection of the light, which can increase their lights’ efficiency significantly. If there are no gaps, and growers can’t vent above the screen, they need some extra tools to control the climate in the growing area.

One answer is supplemental dehumidification technology. Habraken uses the Hinova Ventilation Jet system as an example, which combines two fans to provide controlled ventilation of the growing area, even with the screens fully closed. “One speed-adjustable fan draws in fresh air through a slender, rectangular tube from above the screen into the growing area, and then a vertical fan mixes fresh, dry air with warm, humid greenhouse air and distributes it to provide a homogenous climate,” he says.

Vertical air movement also influences the microclimate around the leaf. Good airflow makes it easier for plants to release humidity through the microclimate layer. “Normally we do this through air movement caused by the pipe, but that is rather expensive,” he says. “It’s easier and cheaper to do it with a vertical fan.”

With this system, growers do not need to make any cuts to the screen as they often have to with other similar systems. Instead, the screen runs around the ventilation jet tube without any adjustments. This way, growers can have the screens fully closed and the lights on but still bring fresh air into the growing area.

For growers who aren’t sure where to start with light abatement, or do not want to make large adjustments to their climate control, where can they begin?

“If you don’t have a measuring box above your climate screen, that’s the first and easiest return on your investment,” Habraken says. “Install one with a temperature and RH sensor, and even better, also install an RH sensor outside, so that you can have full control and good visualization [of] where the differences in AH and temperature are and you can take the right steps.”

Used correctly, those steps could be sizeable assets to any installation or light abatement strategy.

Joli A. Hohenstein is a horticultural communications professional, writing on behalf of ACT. ACT is an educational platform dedicated to the needs of the high-tech cultivation industry.