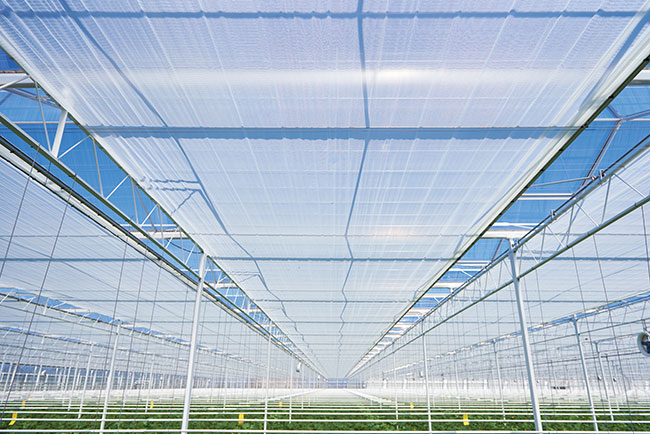 There’s an important piece of technology suspended in the greenhouse that doesn’t receive as much attention as it deserves.

Accumulating dust, dirt and sometimes algae, energy screens are often left unchanged for far too long. As B.C.-based Tineke Goebertus of Vortus Greenhouse Consultants explains, there are two different lifespans to note. “The technical [lifespan] is when it falls apart,” she says. “The economic [lifespan] is when you have so much dust, fray, and improper closure that the advantages of having a screen are cancelled out.”

Based on Goebertus’ observations, she estimates the average economic lifespan to be around five years – much shorter than the technical – but she’s seen growers hang onto them for ten years or more. Though annual cleaning can help, the grime can’t be eliminated entirely and will continuously build.

“Screens gradually lose their light transmission over time,” says Robert Hanifin, greenhouse climate specialist at Ludvig Svensson. “Depending on the material composition of the screen, that can be over one per cent a year.” Even without dust and algae, the screen itself will age from the intense heat, light and other greenhouse conditions it’s subjected to. “The old adage is, one per cent light [equals] one per cent production. If you’re losing light transmission every year, by the time that energy curtain is seven or eight years old, you’ve lost 10 per cent of light transmission or more. That’s lost production, and it may not be readily apparent because it’s happening slowly over time.”

Depending on the product and how it’s being treated, Hanifin says a good rule of thumb is around six to eight years for screen replacement. But growers shouldn’t wait for holes to appear, because by then, the situation is already dire.

“You have cold air from above, dropping through your screen, making a cold spot somewhere,” Goebertus explains. A compromised screen leads to uneven greenhouse temperatures, inconsistent lighting and a drop in energy efficiency. Patching up damaged areas with a different material won’t help much either, and might even hinder.

Make it a double

Already a staple in European greenhouses, double screening is quickly becoming the norm for Canadian greenhouse vegetables and growing among ornamentals. Compared to using one screen, two screens allow for greater flexibility and control of the greenhouse climate, as well as higher energy savings and growing by plant empowerment. Depending on their needs, producers can mix and match between different types of screens with varying characteristics, including energy-saving curtains, screens with varying levels of shade, and ones doubling as blackout curtains for light abatement.

For Goebertus, some of her B.C. growers run two energy-saving screens in opposite directions. This way, there are a few options to employ the screens. Both on a brisk cold day, only the bottom screen on a milder day, or none on a nice sunny day. When both screens are used, “You can overlap them more or less, depending on the weather conditions and greenhouse climate”, she says, “have a little bit of a chimney in between and more exchange of air that way.”

Some of her other growers have opted for a shade screen on top, using an open-structured style from Svensson’s Harmony collection. Different from the typical woven construction, these screens have inherent gaps built in for more uniform airflow even when the screen is completely closed, allowing for greater dissipation of moisture and heat. Plus it helps reflect light from the greenhouse and diffuses the transmitted light to the crop below.

When shopping for new screens, Hanifin suggests looking for breathability that will allow for efficient transport of humidity, as well as a suitable degree of transparency. “Transparent energy curtains allow the grower to deploy them during daylight hours,” which means saving energy without sacrificing much light, says Hanifin. “It’s very important in the winter, [especially] for high light-demanding crops,” such as tomato and cannabis. Increasing transparency is one area that continues to improve in this market. Hanifin highlights Svensson’s Luxous 1147 FR as a key example, which currently offers 89 per cent light transmission in direct light.

Light diffusion may also be another factor. When used as the bottom in a pair of screens, the combination can produce a cumulative shade effect. Say, a grower chooses a curtain with a high degree of light diffusion with low overall shade, says Hanifin. “That’s good for most of the year, but in the summer, a grower may want more shade. One solution would be to partially deploy the curtain above, taking advantage of the light scattering properties of the one below to avoid areas of light and dark in the crop.” The result is more evenly spread light, both horizontally across the greenhouse and vertically through the canopy.

For growers using supplemental lighting, screens paired with light abatement options continue to grow in popularity as local regulations address light pollution. As a safety precaution, most modern climate screens with high fire safety standards will use flame-retardant materials that have been tested by a third party and meet strict North American standards, Hanifin adds. Closed-structured energy-saving screens often qualify for rebates, from either the local natural gas utility or provincial sources.

As for what’s coming on the horizon, Hanifin sees a growing desire for sustainable options. “You can’t recycle used curtains,” he points out, so there needs to be a way to keep old curtains out of landfills. “Can they be made, to some extent, from post-consumer recycled materials? We have to move towards that.”

Taking care of your screens

“In a perfect world, you should set money aside every year, so that after five years, you can replace your screen,” says Goebertus. In the meantime, there are ways to maintain its efficiency and prolong its economic lifespan.

First, make sure the screen is properly installed, Goebertus offers. No gaps should occur between the wall and the screen because that can let in cold air. Screens should be correctly installed at the trusses and close properly. “Make sure it’s all done well,” she stresses, because a cold spot in one area means a warm spot in another, and temperature differences in the greenhouse tend to linger. “The colder it is, the more of a temperature difference you’ll end up with. You’ll have very uneven crops in your greenhouse.”

As the wire beds surrounding the curtains start to fray, both experts agree that it’s important to replace them. Otherwise, the tiny barbs could cut into the screen, further shortening its lifespan.

To clean off the dirt and grime, growers can use water along with any product approved by the curtain manufacturer, says Hanifin. “For our products, this would normally be a weak hydrogen peroxide solution that can either be applied manually or using foggers.” Annual sanitation and cleanout periods would be an ideal time.

As the curtains age, Hanifin suggests that growers keep an eye on the amount of light transmitted. Permanent sensors above and below the screen would be ideal, but for growers who aren’t quite ready to invest in fixed sensors, he suggests purchasing a handheld PAR (photosynthetic active radiation) sensor. “[It’s] a good piece of equipment to have for taking spot measurements around your greenhouse and at crop canopy height. First without the screen deployed, then with the screen deployed… Measuring light transmission through your curtains as it ages is good practice.”

Sensors could also help growers optimize the use of screens. “When the temperature gets to a certain point above the screen, when it starts heating up because of the sun, this is a good time to open your screens,” says Goebertus.

As winter descends upon Canada, operators might close the energy curtains to lower the greenhouse utility bill, but the plants still need energy to thrive.

“You need to put some energy into your plants to build strength,” says Goebertus. Though it may seem counterproductive to saving energy, heat running through the pipes is a way of injecting energy into the greenhouse. This is particularly important for peppers, which grow for over a year in the greenhouse.

Closed screens and lower pipe temperatures could be problematic for crops, especially if greenhouses are not equipped with a movable screen on the walls. “Most of my growers have extra heating pipes along the wall with manual valves instead,” she offers. The valves are kept open in December, then adjusted as the temperature shifts over the winter months. Others have sensors on the wall, adapting the temperature of the pipes to ensure as even a temperature as possible.

Energy is still being saved, but like most tasks in the greenhouse, it’s about striking a balance between gas consumption and healthy crop production. “The plant is our dictator in this sense. We’re just servants to our plants,” says Goebertus.

Related
What your energy screens say about you
Putting on your summer shades
Leveraging innovation to reduce energy costs
Who still believes in the pre-night drop and morning dip?