Day or night – how to promote a crop’s self-cooling strategies and improve temperature uniformity under a blackout screen. 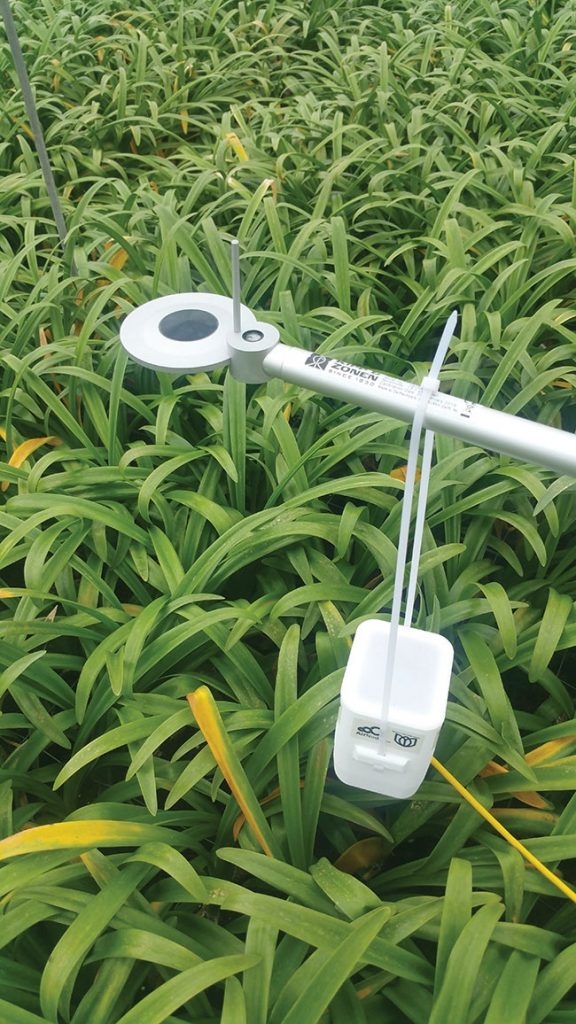 A net radiation sensor is pictured. The white box below is a wireless temperature/RH sensor.

The sun can bring 800 Watts per m2 inside a greenhouse. That is a huge amount of energy, especially considering the total size of greenhouses nowadays. For a 10-ha greenhouse, that equates to 80,000 kW! However, only two per cent is converted by the crop canopy for growth, the other 98 per cent will leave the greenhouse. In that sense, plant production is not very energy efficient.

What is true for sunlight is also true for expensive artificial light, however, lamps bring less energy into the greenhouse. For example, to produce 200 µmol/m²·s, high pressure sodium lamps bring in 114 W/m2 of energy, while LED lamps bring in 74 W/m2. When LED fixtures are water cooled, this energy is reduced to 48 W/m2.

What is Energy Balance?
Greenhouse production is bound to the rules of physics, and one of the most important rules is that energy never ‘disappears’ but is usually converted into different types of energy. For a greenhouse, energy input and output are always in balance. (For more, refer to the first article of this series in Greenhouse Canada, Mar/Apr 2019). The amount of energy absorbed by the plant is less than the energy entering the greenhouse, as part of the radiation is reflected. The plant can actually control that reflection by turning its leaves or by changing the shine of the leaf.

The amount of energy absorbed by the canopy can be measured with a device known as a net radiometer. It measures light energy that has entered the greenhouse in the visible and infrared (heat) ranges, then subtracts the energy reflected by the canopy. The resulting measurement is the absorbed energy that must be converted by the plant to make the energy balance equal. So, the plant has its own energy balance to maintain.

Maintaining balance during the day
In the graph (Fig. 1) at 1 pm, about 70 per cent of the incoming radiation is absorbed by the canopy. This means that approximately 470 Watts/m2 needs to be converted by the plants.

On warm days, plant transpiration and convection (the movement of hotter air to cooler areas) are the main forms of energy output. Radiation and convection are the main inputs. As soon as the greenhouse air is warmer than the leaf, it will bring convective energy to the leaf in addition to the radiative energy already present. This is especially true for crops with high transpiration rates. So at that moment, transpiration is driven more by convective energy than the radiative energy absorbed by the leaf. But since transpiration fluctuates as it is controlled by stomata opening, the leaf can also become warmer than its surrounding air. In that case, a large leaf area in combination with air movement will help the leaf dissipate a part of the absorbed radiation energy, thus lowering transpiration. In some cases, this reduces transpiration so much that it saves the plant from water stress.

So far, transpiration models do not take this important factor into account, but for many potted plants, this method can be very beneficial to their survival. Air movement is therefore very important in a closed greenhouse as increased air movement will reduce transpiration under high radiation.

Usually, transpiration is the plant’s main output converted from absorbed solar or lamp radiation. So, it is very important to keep transpiration going over the course of the day. But very often, the wrong ventilation strategy is chosen to release heat from the greenhouse.

By ventilating too much, relative humidity (RH) will drop to under 60 per cent. This increases transpiration to such a high level that the water balance will be disturbed. In the afternoon, there is not enough water available in the plant, and the root system cannot replenish it quickly enough to keep transpiration going at the required level. The stomata opening will then reduce in size, and the leaf temperature will rise. At that point, convective energy exchange will often save the plant, but photosynthesis will no longer be optimal because CO2 will have more difficulty passing through the reduced stomata opening. To prevent this situation, the RH in the greenhouse should be raised. This can be done in two ways.

First, when the ventilation opening is reduced, RH of the air will rise, thus increasing the amount of heat (enthalpy) in the air. A lower volume of air could then be released from the greenhouse to get rid of the same amount of energy. This way, greenhouse temperatures will not rise as much. And because of the reduced ventilation, less CO2 will be lost to the outside world.

The second method is even better: use high pressure misting to increase the RH of the greenhouse air. With this equipment, part of the solar radiation absorbed in the greenhouse will be converted as the fine droplets evaporate. Evaporation converts a lot of energy – 2256 kJ per kg of water. A radiation of 100 Watts/m2 for one hour is equal to 360 kJ. This means that for the conversion of this amount of energy per hour, 160 grams of water must be misted per m2. The plant will then reduce transpiration by the same amount to maintain balance.

Other articles in this series

Balance at night and in the dark
When there is no light, the amount of energy absorbed can be less than the amount emitted. The plant loses energy as it is radiated upwards towards a cold greenhouse roof. That can be seen in the graph (Fig. 1), where the value is negative after 18:00 hours (right axis). That is a dangerous situation because the canopy will have a temperature far below its surrounding air. This situation can result in a loss of transpiration, which will stop the transfer of calcium and cause weakened plant cells. Also, condensation can occur, resulting in botrytis development. A sudden drop in transpiration can also lead to ‘guttation,’ where the warm roots keep pumping water and push it out of the plant cells at the top of the canopy. This causes plant cell damage in that area and can later be infected by botrytis.

The best way to prevent this problem is by making the surface above the canopy warmer, by pulling a screen or by using overhead heating pipes, for instance.

By far, evaporation is the most important way to convert the absorbed energy. Transpiration of water requires a lot of energy and is a very efficient way of conversion.

A net radiation sensor is pictured. The white box below is a wireless temperature/RH sensor.

Balance at night with artificial light
Prevention of light emission traps the energy produced by the lamps under the blackout screens. Screen gaps are usually opened to prevent a rise in temperature, but this has a very negative effect on the horizontal temperature distribution across the greenhouse.

Because of the slope in the screen, warm air gathers at the highest point in the middle of the greenhouse complex (Fig. 2). There, it will escape through the screen gaps and once it enters the area above the screen, it cools down very quickly. Since cold air is heavier, it will start flowing to the lowest point above the screen, which is the area along the outer wall. Now very cold, this air will drop vertically through the screen gaps, causing localized powdery mildew and a drop in crop transpiration. In practice, the result is a temperature difference of 4 to 8 °C in the greenhouse, mainly depending on the energy capacity of the installed lamps.

This problem can be partially solved by installing vertical screens above the blackout screen, where one vertical screen is positioned along every 30 m of blackout screen. But very often, wind forces will suck air out of the greenhouse on the windy side. These forces will also create large temperature differences and the vertical screens will not help in those situations. The best solution is to minimize horizontal temperature differences in the greenhouse as much as possible, by installing an airtight blackout screen and without opening screen gaps. Warm air is then trapped under the screen, so vertically blowing circulation fans will need to be used to push that warm air down in the canopy (Fig. 3). This action has two positive effects. Additional heating below the canopy will no longer be needed to prevent condensation on the lower leaves, thus reducing the amount of energy that would need to be extracted by about 50 Watts/m2, based on standard pipe temperatures typically used. At the same time, the moisture within the canopy is removed without increasing transpiration by too much.

The energy produced by the lamps can be extracted from the greenhouse with the help of fans. Several options are available, from air tubes to air injection fans mounted in openings along the blackout screen. For uniformity of temperature as well as absolute humidity in the greenhouse, it is important to introduce outside air and have it uniformly distributed over the greenhouse area. Also, the release of warm and humid greenhouse air to the outside world needs to be well controlled.

One particular new strategy achieves that by using an air injection fan with a capacity between 5,000-10,000 m3/hour along every 250 m2 of blackout screen. This introduces dry and cold air from above the closed blackout screen. The greenhouse air is released in the middle section of the greenhouse through local gaps in the screen and individually controllable ventilation windows. In the future, the energy contained in that extracted air could be regained with a cooling device. That will be the next step in operating a greenhouse without fossil fuels.

Key takeaways
The energy input in a greenhouse can result in overheating of the crop canopy during the day, as well as horizontal temperature differences of 4 to 8 °C when lamps are being used under a blackout screen.

Overheating can be avoided through air movement, which helps increase the convective heat exchange of a leaf. Maintaining high humidity during days with intense radiation, either by means of restricted window openings or the use of a misting system, will help the plant keep itself cool by transpiration for as long as possible, and at the same time, keep the stomata wide open to let in CO2.

A non-uniform distribution of temperature under a blackout screen is caused by cold air dropping through screen gaps and by wind coming through a porous screen. Installation of vertical screens above the blackout screen and use of airtight screen materials will greatly improve uniformity. However, to maximize these solutions, a controlled system for mechanical ventilation and air circulation would be required.

Learn more about Plant Empowerment
GPE is based on the same principles as ‘Next Generation Growing’ (NGG), developed in the Netherlands over the last 15 years. It has been shown that this approach can deliver significant advantages regarding production and quality, plant health and energy savings for many different crops. For the most part, this can be achieved without additional investments in greenhouse equipment.

The basic principles have been further developed, refined and extended, focusing on optimal growth in a sustainable way and now goes by the new name ‘Growing by Plant Empowerment.’ For more on GPE and the book Plant Empowerment: The Basic Principles, visit plantempowerment.com. Copyrights of text and illustrations: LetsGrow.com, 2019.

Peter van Weel was a senior researcher for Wageningen University. He retired in 2016 and is now the owner of Weel.Invent, a private research and development company for greenhouse production systems. Peter is one of the authors of Plant Empowerment: The Basic Principles