State of the Industry report is generally quite upbeat in terms of sales and new products. 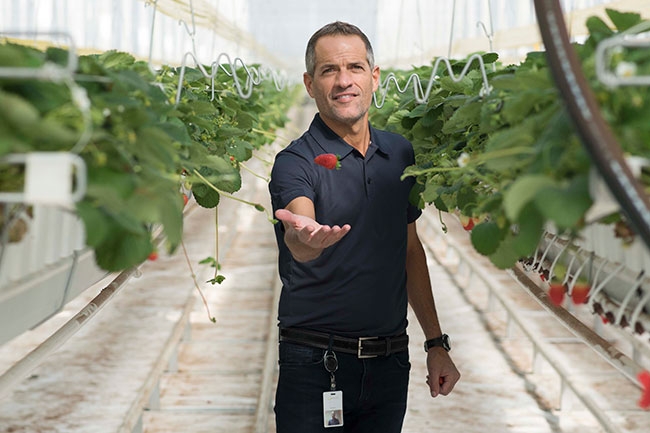 Labour issues, both in availability and rising costs, were cited by all the experts we surveyed for this year’s State Of The Industry report.

Increasing minimum wage levels in a number of jurisdictions (Ontario, British Columbia and Alberta) are having an impact as growers face a challenge trying to cover the increases with product pricing adjustments.

For most, it’s a tough sell.

CANNABIS A GAME-CHANGER
Any State of the Industry report this year will acknowledge the continued – and amazing – growth of the cannabis sector. However that topic has been covered by the magazine extensively over the past few years, and now by our sister publication Grow Opportunity. Suffice it to say that it has become an industry game changer, and will strengthen the overall horticulture sector throughout Canada thanks to increased political attention and support, along with growing employment opportunities.

So to get on to something new, let’s look at another new crop generating excitement and here we will point to the impressive expansion of greenhouse strawberries in Ontario.

The leader in the field is Mucci Farms, located in Kingsville, Ontario. The company has long been an industry leader in greenhouse vegetable production and it was no surprise when they launched into this new category – and with great success.

Beginning with only a few rows in 2015, the company is in the middle of a three-phase expansion project, adding 12 acres in 2016, and 12 last year and 12 again this year. The 36 acres of total production will represent the largest greenhouse strawberry greenhouse in North America. The strawberries are marketed as Smuccies Sweet Strawberries.

There is an additional 20 acres or so of greenhouse strawberry production in the province.

Among the other major growers is Orangeline Farms/Zing! Healthy Foods. In 2016 the company received the Ontario Premier’s Award for Agri-Food Innovation Excellence for its greenhouse strawberries. The Leamington company was one of the first to grow the crop in Ontario, with its first plants bearing fruit in 2014.

The Harrow Research Station has completed a number of studies to assist with this crop.

There have been seminar presentations on the topic at the Pacific Ag Show and the Canadian Greenhouse Conference in recent years, all very well attended.

Affinor Growers has completed trials growing strawberries with its tower system, and with promising results.

Quebec has about 10 acres of greenhouse strawberries.

And now to get out of the berry patch and into other industry developments.

The Ontario greenhouse vegetable sector is heading into the new year with momentum. Sales in general are strong, prices are good, and new products are winning the hearts of more and more consumers.

ONTARIO TOMATO SALES
Asked about 2017 market conditions, they noted that it was a year of two extremes, “with beefsteak tomatoes doing very well over the course of the year and tomatoes on the vine doing just the opposite. The beefsteak market was largely driven by a severe shortage in field tomatoes destined for the food service market.”

TOVs, however, did not benefit as strongly from this and pricing lagged.

But specialty snacking varieties (grape, cherry and cocktail) continued with double digit growth, and also saw historically strong pricing over 2017, due in large part to the havoc caused by Hurricane Irma on the Florida supply chain.

Cucumbers enjoyed one of their strongest years on record, notes the OGVG, “with summer pricing well above historic averages and elevated pricing continuing right through the fall.”

Peppers, on the other hand, had a reasonable year, with steady pricing in the mid to high teens per case.

RISING COSTS OF PRODUCTION
The overarching challenge facing OGVG members is the increased cost of production.“Recent and abrupt changes in government policy will continue to hit the sector, and horticulture in general, hard. The speed at which these changes have occurred hasn’t allowed for the relevant markets to adapt and it is likely that growers will be forced to absorb these costs for the near-term future.”

While these impacts have been recognized by the government through the Greenhouse Competitiveness and Innovation Initiative (GCII) and recently announced offset programming, “there remain concerns that lack of a full understanding of the nuances of greenhouse production will leave such programs lacking and fundamentally not address the concerns of our members,” notes the OGVG.

“It is our hope that the government will work closely with the sector when developing any future programming that may address some of these competitiveness issues.”

Of particular note is the impact of cap and trade, “a challenge which many growers have struggled with over the past year. While there are measures that some growers can implement to reduce their emissions, many operators are already at the forefront of innovation and have already installed all the available technologies.”

BRACING FOR LARGE MINIMUM WAGE HIKE
Looking ahead to this year, OGVG anticipates the minimum wage hike, which came into effect Jan. 1 – the rate is now $14/hour – will be felt. “This large cost impact, over 20 per cent increase to our largest production cost, will be extremely difficult to navigate as price takers in the global marketplace.”

Senécal is a greenhouse consultant with 30 years experience, including 28 years as a crop advisor with the Québec Ministry of Agriculture, Fisheries and Food.

BUY LOCAL MOVEMENT
The Buy Local movement is strong in the province. “Two-thirds of Quebecers are sensitive to local purchases,” says Senécal. More and more labels are including the name of the grower and mention of “Product of Québec.”

Labour is a major challenge. “The industry needs skilled workers with knowledge.”

In British Columbia, both the ornamental and vegetable sectors are quite vibrant.

On the vegetable side, total acreage is 810 though another 60 acres or so of former veg production is now devoted to cannabis.

GROWING POPULARITY OF MINI VARIETIES
Production of mini varieties of peppers and cucumbers is a growing niche, and production of eggplant is growing.

The Buy Local movement is particularly strong in the province.

For the past five years the B.C. Greenhouse Growers’ Association has hosted “B.C. Greenhouse Veggie Days,” which include open houses and tours at four operations across the Lower Mainland. In addition, point of sale merchandising is carried out in all Canadian Superstores and the Overwaitea Group of retail grocery stores.

Linda Delli Santi, executive director of the BCGGA, says the NAFTA talks are certainly on their radar. Other major issues include “a stable tax and policy environment, such as the proposed changes to private corporations, a national price and policy on carbon pricing, the impact of minimum wage increases and the importance of the foreign workers program.”

The association has been meeting with government officials and preparing stakeholder submissions.

STRONG EARLY SALES OF CUT FLOWERS IN B.C.
The past year was quite successful for most B.C. flower growers, says Bob Pringle, CEO of United Flower Growers, beginning with a strong demand for cut flowers through to June.

The fine weather also boosted production of greenhouse crops such as gerbera, lilies and spray mums “which com-
pounded this oversupply.”

For most of the year, prices were generally better than they were in 2016.

Plant sales were down considerably through May due to unfavourable weather but then things improved and most growers had a very good summer with demand lasting longer through the summer months.

Exports have been strong. UFG deals mainly with cut flowers and demand south of the border is growing, especially for gerbera, spray mums, sunflowers, dahlias, gladiolas and lilies.

Millennials are having an impact, as online sales are growing.

“Many newer floral businesses are being created without a storefront, and bricks and mortar retailers are under continuing pressure.”

Labour continues to be a challenge. “Entry level positions are very difficult to fill,” Pringle explains, “and many growers are dependent on foreign worker programs for staffing.”

Growers are wondering about the future of NAFTA, and what a new agreement – or loss of the current one – will mean to the industry.

“STILL PRICE TAKERS, NOT PRICE MAKERS”
In Alberta, the industry enjoyed a pretty good year in 2017, though prices could have been better.

“The markets for vegetables in Alberta remained decent in 2017 with the usual ups and downs based on supply and demand,” says consultant Dr. Mohyuddin Mirza.

“We are still price takers not price makers and our prices at wholesale depend on supplies from Mexico and other countries especially during winter.”

Seedless cucumbers, both regular long English and minis, showed growth and were the main reason for the improved cash flow. “I think minis will capture more market share in future.”

First came the carbon levy on fuel. However, the industry was able to persuade the provincial government a rebate was needed (80 per cent; the same as provided in B.C.).

Then came increases to the minimum wage and overtime payments.

The Buy Local movement is growing and is particularly evident at farmers’ markets. “I don’t see better prices for locally grown produce although they are grown with a reduced carbon foot print.”

Alberta growers are increasingly turning to supplemental lighting, and with great results. Production under HPS lights has been around for few years and acreage has been expanding.

The challenges, says Mirza, are still in managing climate properly in winter and with the initial high capital costs. Many young plant growers are successfully using LED lights during the early growth phase of bedding plants and plugs.

One tomato grower is using a combination of overhead and inter-crop LED lighting, and with impressive results.

Looking ahead, Mirza notes the carbon levy rebate program will end in 2018 and it remains to be seen if this will be re-instated. The classification of greenhouses as farms will be a top priority because it affects labour and taxation. The Temporary Foreign Worker Program is being revamped and it is hoped that it will become less complicated. In addition, minimum wages are increasing again.

OGVG
Exports to the U.S. remain strong, even as the U.S. greenhouse vegetable sector continues to grow. “We attribute this to the rising consumer preference for greenhouse-grown produce throughout North America. As education and awareness of the benefits of greenhouse production increases, so does demand. These attributes include enhanced flavour, reduced pesticide use and extended local production, just to name a few.”

As for new crops, lettuce production will continue to grow and become more cost competitive, especially as freight rates continue to rise.

“Mini peppers, striped peppers, and other niche varieties have been slowly growing over time, in large part driven by customer/retailer requests.”

Ontario growers enjoyed much greater success with pepper weevil than was experienced in 2016. “This success was achieved through the use of dedicated resources, hard work and diligence and that commitment is critical going forward to ensure future outbreaks are minimized. We commend the significant efforts of our members in managing this aggressive pest.”

Similarly, cap and trade continues to be a challenge for Ontario growers who compete against jurisdictions that have no (many U.S. states) or reduced (B.C. and Alberta) carbon pricing impacts.

“The renegotiation of NAFTA is also a concern for our members, most of whom export a significant fraction of their production to the U.S.,” says the OGVG. “We continue to work with the Canadian negotiation team to ensure the message of ‘do no harm’ is accurately represented.”