How will 2019’s successes and challenges affect 2020? Experts from across the country weigh in. 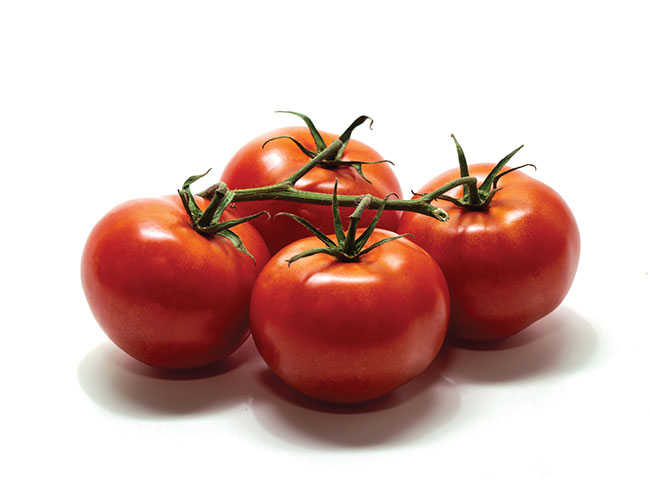 From growth in acreage to viral concerns, the biggest topics of 2019 differed somewhat depending on the area of Canada. Though these issues will likely continue to impact greenhouse growers in 2020, industry experts and representative associations have continued to prepare their growers for the foreseeable road bumps ahead.

A globe-trotting virus
“It’s going to be one of the most important issues for tomato growers in 2020,” Niki Bennett says of the tomato brown rugose fruit virus (ToBRFV, a.k.a. ‘the rugose’). As the science coordinator of Ontario Greenhouse Vegetable Growers (OGVG) explains, there are still many unknowns about ToBRFV and limited options in the toolbox, but good sanitation practices seem to be able to prevent and eradicate the virus.

So far, individual countries have each developed their own protocols for testing, which may cause difficulties at the border. To standardize protocols, Canada, the U.S., and Mexico, are working on an internationally recognized test for the virus. DNA sequencing is the only currently available method for confirmation, but it can be costly and time-consuming, says Bennett. In production environments, a simple test such as an immunostrip can serve as a quick indicator while waiting for the sequencing results to come back. If the immunostrip turns up positive, growers may assume that the plant has been infected with ToBRFV.

It takes less work to pull out a single plant or a handful of plants than waiting another week for DNA results, says Bennett. Waiting might allow the virus to spread through the greenhouse even more. “We’re encouraging growers to be vigilant and to stay ahead of it,” she says. “Don’t wait. Take action first.”

In November 2019, the U.S. introduced new regulations on tomato and pepper imports for both propagative materials and fruits, requiring certification that shipments are rugose-free.

“At the border, the grower or company owner must present documents self-declaring that the fruit appears to be virus-free,” says Linda Delli Santi, executive director of the BC Greenhouse Growers’ Association (BCGGA). Each load is to be visually inspected, and suspect samples go to a USDA plant pathologist for further testing, which can delay shipments at the border. “Some loads you could still reship after four or five days,” she says, “but once it gets to the customer, who knows how long it goes before it reaches the consumer?”

Growers facing long wait times can also sell domestically, but removing any specially branded, retailer-specific packaging will incur extra costs, not to mention additional time and money spent on trucking. “It slows down trade,” says Delli Santi, “and it results in less fresh product.” By standardizing paperwork for both BC and Ontario, Delli Santi hopes that it will make the process more seamless for growers.

Ornamental producers aren’t in the clear either. As Dr. Sarah Jandricic, greenhouse IPM specialist for the Ontario Ministry of Agriculture, Food and Rural Affairs (OMAFRA) notes on the ONFloriculture website, the U.S. federal order “may restrict export opportunities…on products such as ornamental or potted peppers, tomato seedlings and tomato transplants.” It is recommended that ornamental growers contact their local CFIA office for instructions regarding upcoming shipments.

Expanding acres
The future looks bright for cucumber growers in Ontario. Glen Snoek, OGVG’s marketing and economic policy analyst says they’ve been seeing a lot of growth in cucumbers. “Opening up of new markets and diversification of product offerings…all of that is helping in terms of sales into the U.S.,” he explains. Going forward, they expect to see new Ontario greenhouses and increases in cucumber plantings, particularly as demand from the U.S. continues to rise. “We saw a 14 per cent increase in seedless long English cucumbers, but the bigger impact was on mini cucumbers – a 35 per cent acreage increase,” he says. “That really had an impact on pricing and availability in the cucumber segment.”

Overall, a substantial increase in Ontario greenhouse vegetable acreage is expected for the coming year. “We’re seeing additional investment into lit acreage,” Snoek says, referring to LED and HPS lighting, as well as “significant changes in how things are grown and how crop cycles work.” New investments in gas and electrical infrastructure will help allow for additional lighting and new greenhouse builds.

Cucumbers were also big in Alberta. The province saw an increase in winter production capacity of mini and long English cucumbers primarily from the expansion of existing growers, says long-time greenhouse consultant Dr. Mohyuddin Mirza. With greater adoption of LED lights, capacity for winter tomato production “gained a stronger foothold,” he says, along with organic winter production of both cucumbers and tomatoes. “Although Alberta growers are still price ‘takers’ and not price ‘makers,’ they did make some progress to influence winter prices,” he adds. As well, the “supply of fresh lettuce and other salad crops improved considerably with large-scale greenhouse facilities in Southern Alberta.”

In BC, new construction for greenhouse vegetables has mainly been in peppers. “It’s been the same for years – just slow and steady growth,” says Delli Santi. While tomatoes seem to be holding steady and cucumber area has experienced a slight decline, Delli Santi says their members will grow what the market demands, and some are looking into new crops such as greenhouse strawberries. 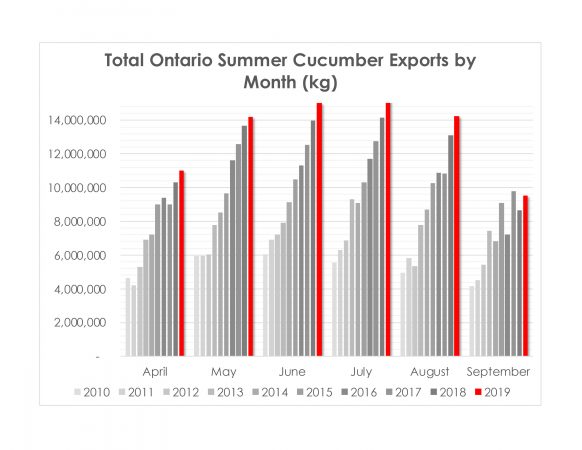 Energy shock
The gas pipeline rupture of October 2018 was easily the biggest challenge for BC, says Delli Santi. Prices skyrocketed from close to $3 per GJ up to $201 per GJ after the rupture, rising and falling erratically. “There was nothing you could do about the price of gas,” she says. “You can use it more efficiently, but you can’t do anything with the actual price.”

Foreseeing other sectors tapping into the pipeline, the BCGGA has been presenting their members with alternative options for natural gas suppliers such as Fortis BC. “Fortis BC doesn’t make money on the sale of gas,” she explains. “They only make money on the pipeline and the distribution system – at least on the commercial side.” As well, because Fortis BC owns pipeline north of the rupture, pricing has been less volatile than the area south of the rupture near the border. However, pipeline capacity has still not yet reached 100 per cent and that could lead to pricing volatility in the coming year.

For Alberta, energy was also a major challenge, but owing to changes in political climate and regulations. “The carbon levy weighed heavily on growers’ minds,” says Mirza, “[but] with good negotiations with the government, a rebate program helped to achieve some sustainability.” It offers an 80 per cent rebate to greenhouse growers on natural gas and propane used for crop production – a structure similar to rebate programs in other provinces. As growers turn to more energy-efficient options, active conversations on carbon footprint reduction will continue to take place well into 2020 and beyond.

The labour gap widens
Labour was another key issue on growers’ minds in Alberta. “Availability of labour on a consistent basis was a challenge, and many growers tried to use as much local labour as possible,” says Mirza. To tackle this problem, the Alberta Greenhouse Growers’ Association (AGGA) was able to help regain farm status for greenhouses. “This has helped to resolve labour overtime issues and tax-related problems,” he says.

Québec-based greenhouse consultant, Michel Senécal says their growers were also having trouble filling key positions, including delivery truck drivers and greenhouse crop managers. “Some have not solved this problem,” he says, but a longer term issue that needs attention is succession planning. “Many greenhouse growers will soon reach the age [when they’re] thinking about retirement,” says Senécal, “and many have no one to take over. It is the same problem for all of Canada.”

“82 per cent of consumers want to buy products or services that are good for the environment,” says Senécal. Known as “eco-responsible consumption,” Senécal thinks this trend has turned into a habit that will continue to have a positive influence on the industry. However, he also notes an increase in the costs of production in Québec, even though sale prices have not risen quickly enough to catch up, and negotiating with buyers is never easy. “The basic rule is simple. You have to produce what will be sold to avoid losses while changing the product range to suit the consumer.”

Boiling in the background

The Ontario Greenhouse Alliance (TOGA) and its partners have been working on changes to requirements for boiler safety for the past three years now. “It stems from concerns from insurance inspectors that some boilers may not be maintained as well as they should be,” says Jan VanderHout, president of TOGA and co-owner of Beverly Greenhouses.

As VanderHout explains, Ontario is conducting a comprehensive review of many items that may or may not pose safety concerns to the public. This includes the agricultural exemption on boilers.

“We’re working with government to come up with a plan to create a pathway to compliance [but] without the exemption and without having our boiler rooms attended by operating engineers,” says VanderHout. “Part of it will be the registration of the pressure vessels when they’re installed,” he explains, which is the identical process for burners in the greenhouse. Modifications and repairs will need to be completed by certified personnel.

Without the exemption in place, the Technical Standards and Safety Authority (TSSA) can help enforce proper boiler use. “If you’re operating your facility safely, there’s no reason to be concerned.”

VanderHout envisions some level of boiler training in place. “Even the smallest boiler needs proper and ongoing maintenance, which is daily in the case of steam boilers,” he says. Though most greenhouse boilers now use hot water, and any steam boilers typically run at 15 psi or less, all the right safety devices still need to be verified, he says. Who has the authority to enforce boiler safety? Under the current exemption, no one.