Features Business Trends
Looking back towards the future: State of the industry

Labour, energy, trade agreements and herbs – what went on in 2018 and what’s ahead. 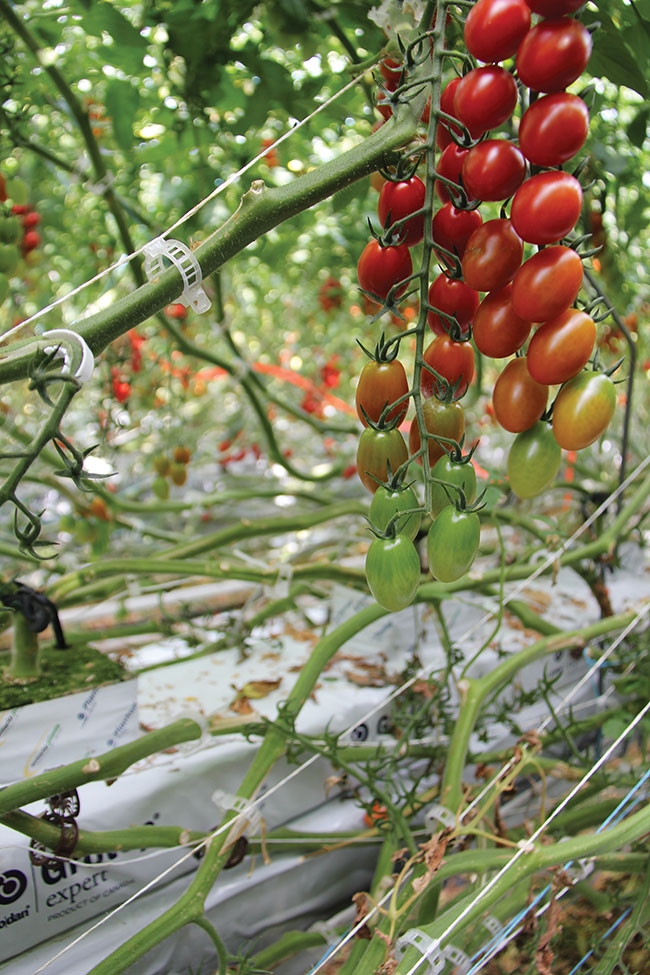 2018 was a year of expected – and unexpected – change. Labour and input costs continued to rise, carbon levies in the works, and the shortage of experienced labour continued. Cannabis and the renegotiation of the North American free trade agreement left large periods of uncertainty.

But it’s not all doom and gloom. There’s been growth in both ornamentals and vegetables, with clear trends towards tasty, local products – some grown in consumers’ own backyards. Here’s what experts had to say in this year’s state of the industry report.

Tomato fight
In Alberta and BC, things have remained relatively stable for greenhouse vegetables. Andre Solymosi, general manager of the BC Vegetable Marketing Commission, has seen continued growth in snacking tomatoes, paired with a “downward trend in beefsteak demand” due to increasing preference towards tomatoes on-the-vine (TOV).

In Ontario, the tomato category has been broken down into many separate SKUs as retailers try to entice buyers with new packaging, varieties and flavour profiles, note economic policy analyst Glen Snoek and general manager Joe Sbrocchi of Ontario Greenhouse Vegetable Growers (OGVG).

While all tomato, cucumber and pepper volumes increased year-over-year, the markets were not favourable in 2018, notes OGVG. Cucumbers “started out higher and then hit a prolonged depression”. They have experienced significant upward trends in the weeks leading up to the preparation of this report, however, they note that “even if the overall average return to growers meets or exceeds last year, it’s only the growers who stayed in for the long haul that will reap the rewards”.

2018 was also plagued by uncertainties around the renegotiation of NAFTA 2.0 and possible acreage losses to cannabis, which hampered planning and orderly marketing of crops, says OGVG. While losing land to cannabis hasn’t yet made a significant impact on greenhouse vegetables, it’s something the organization is monitoring very closely.

Across the ocean or around the corner
According to Solymosi, US markets aren’t a big source of growth for BC greenhouse vegetables. Their sights are set on Japan. “We do see opportunity there,” he says, but it’s also exchange-rate driven. “If it’s more favourable, then there’s more demand for Canadian product.” The markets have really opened up for Canadian-grown peppers in the past few years, he adds, and it’s been 25 years in the making for access to the Japanese market due to long market export processes.

For Ontario, tomato exports to the US have remained relatively flat, says OGVG. Cucumbers continued to show strong performance, and peppers “saw a return to previous planting levels in 2018, with decent, although not spectacular, export volumes” broadly similar to 2017.

Even with the new United States-Mexico-Canada agreement in place, we may not be out of the woods yet. “US trade rules and regulations remain a significant unknown, even with the signing of USMCA/CUSMA,” says OGVG. “Recently introduced US trade remedy laws targeted primarily at Mexico may yet hit the Canadian greenhouse industry as collateral damage.”

Alberta has taken a different approach. While the province remains a net importer of greenhouse products, says Mirza, “the emphasis has been more on increasing local supply to the domestic market”.

Bill, bills, bills
Increases in natural gas prices are causing some unease among Alberta growers, especially with the carbon levy on greenhouse fuel. “Temporarily, there has been relief by the government of Alberta in the form of an 80 per cent rebate,” says Mirza. “At this time there is no announcement by the government if this rebate will be extended beyond December 2018.” He also notes that co-gen systems are attracting interest from growers.

BC’s gradual increase in carbon tax is also accompanied by an 80 per cent rebate on natural gas costs. A more pressing issue though, is the ramifications of the gas line explosion near Prince George back in October. This has, and continues, to curtail national gas deliveries, says Solymosi. Uncertainty around natural gas has caused growers to delay the planting of new crops and to pull their crops sooner. With the pipeline capacity constrained, gas prices have spiked and remain variable, he says.

Quebec vegetable and floriculture consultant Michel Senécal identifies rising input costs as one of the top challenges. “From many studies in the greenhouse sector, inputs increased [by] 25 per cent since 10 to 12 years [ago], but the increase of the gross price at the farm is five to eight per cent or less, depending on the product.”

Short on labour
Marijuana production has put a strain on greenhouse capacity. But new greenhouses built prior to cannabis legalization are offsetting that impact, says Solymosi. There’s still plenty of demand for new builds, putting additional strain on labour and building suppliers. “Costs will likely go up as we continue to build greenhouse capacity to supply the growing market.”

Labour is still a challenge, both in terms of costs and supply. Coinciding with new cannabis job opportunities, minimum wage hikes were planned or executed across the nation. “The cannabis sector attracts people and leads to competition for manpower, especially for crop managers,” says Senécal. “We are looking for people with experience.”

Farm succession is also a key issue. “In Quebec over the next five years, 37 per cent of entrepreneurs plan to leave their company to retire. This proportion rises to 41 per cent in the rest of Canada,” says Senécal.

For Alberta, there’s the added issue of identity. Michiel Verheul of High Q Greenhouses notes that they’re watching their hours as greenhouses have lost their status as farming operations. “We have to pay overtime,” he says, but notes that the Alberta Greenhouse Growers Association was able to negotiate a small ministerial variance to help provide some relief. “Also we pay general holiday pay that is 5 per cent, and that works out to nine hours a month on months that have a statutory holiday… In Canada that is nine [holidays] per year.”

“While most of the Alberta government departments regard greenhouses as farming operations, the labour department does not,” explains Mirza. “There is no easy or quick solution to this problem, as changing the law is a lengthy process. Growers are working with the government on this issue.”

Plus there’s the issue of obtaining foreign workers, which has taken longer in recent years to approve with heightened security measures.

Rising costs are reflected on the retail side. Both Christie Pollack of Christie’s Gardens and Greenhouses and Nadine Stielow of Thiel’s Greenhouses have had to raise their prices in response to increased labour and input costs. These will continue to be big challenges in 2019. “Grower margins are too small,” says Pollack, “and we need to optimize our operations to take advantage of producing plants that will create better return and profitability for our greenhouses.”

For Pollack, they saw a 10 to 15 per cent increase in sales on interior plants and hanging baskets, and a 41 per cent increase on tree sales compared to 2017. With the volatility of the Alberta economy in recent times, she sees more consumers growing their own food.

Stielow notes that succulents and small-space selections are still growing in demand. While she doesn’t currently offer houseplants, she sees edibles gaining popularity – and herbs in particular. “Many are asking for very unique herb and edible selections which I’ll incorporate this year,” she says, “like a bigger selection of Asian greens, sorrel, cilantro, epazote and others.”

Both Pollack and Stielow see millennial food gardening as a trend that’s here to stay. “My generation pulled away from growing food, in many cases, because our parents did it [and] made it a chore and a necessity,” says Stielow, but millennials are falling in love with it again. “I see it bridging the gap as an experience that all generations can do together. Grandparents, parents and grandchildren all growing together. It’s shifting from a healthy trend to a lifestyle.”

Differing weather for ornamentals
Senécal says the 2018 season ranks among the best in the last five years for the majority of Quebec greenhouse operators. Sales were mainly propelled by the favourable weather. “Consistent consumer demand has made it possible to simplify the logistics work surrounding deliveries and inventory management during these busy gardening weeks,” he says, reducing stress on growers.

It was a different story for Nova Scotia. “[The] biggest challenges were weather related for the 2018 season,” says Rachael Cheverie, horticulture specialist at Perennia. “Such a late [and] cool, wet spring with late frosts meant that consumers were not interested in purchasing product before early June. From all accounts, product did move in June, but at increased labour costs to producers as much more plant handling and maintenance was required.”

In their 2017 Statistical Highlights Report, Flowers Canada Growers (FCG) noted a national drop in farm gate sales for the first time in five years, by a difference of $11.2 million (-0.74 per cent) from 2016 to 2017. Vegetable bedding plant farm gate sales grew by 20.5 per cent from 2013 to 2017, while cut flower sales continued to decline.

There were differences by province. Farm gate sales for Quebec and the Maritimes grew from 2015 to 2017, by 15 per cent and 10 per cent, respectively. The largest growing regions, Ontario and BC, saw decreases of 2.6 and 2.5 per cent in that same timeframe. Results for 2018 remain to be seen.

What’s growing for 2019
While OGVG can only speak to greenhouse-grown cucumbers, peppers and tomatoes, they note that there’s growing interest in berries, eggplants, beans and lettuces in Ontario.

Out east, Cheverie notices that “there’s lots of interest in growing strawberries/raspberries hydroponically under cover,” not necessarily in greenhouses, but in high tunnels.

Mirza sees salads and herbs as up and coming crops for winter production. Especially with the demand for local products.

FCG’s 2017 stats report noted that tropical foliage and green plants were the fastest growing potted crop from 2013 to 2017, “at an average yearly growth rate of 11.19 per cent”, second in their top 10 potted crops list. Outdoor potted vegetable plants rank eighth with 20 per cent growth, while outdoor-potted herb plants rank fifth with eight per cent growth, both year-over-year.

Sincere thanks to all industry members who took the time to weigh in on this year’s report.