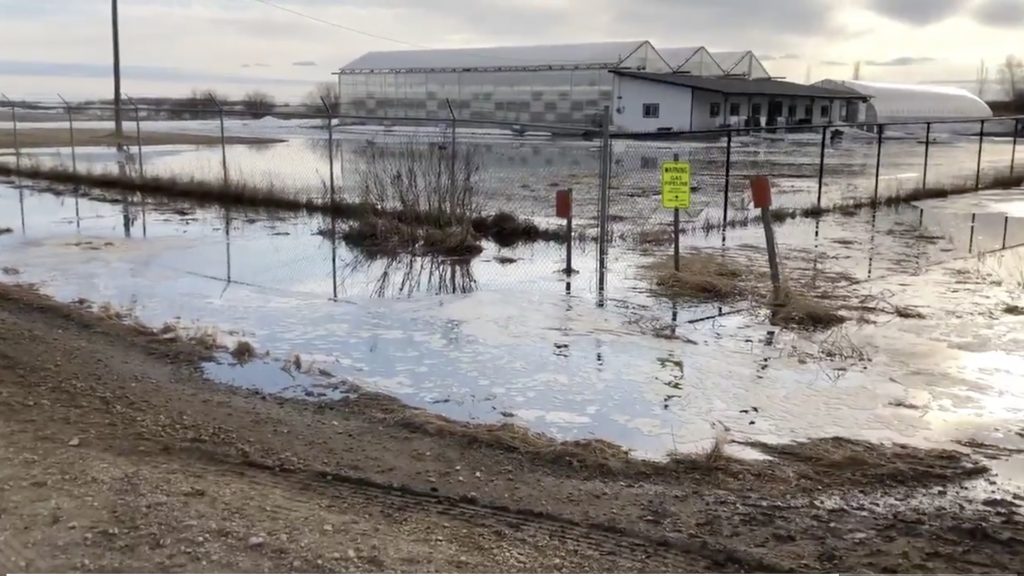 Still of Foisy's Twitter video, showing the flooding on her property

Deb’s Greenhouse has been taking in water – and lots of it.

The flooding started between Saturday night and Sunday morning, with two to six inches of water throughout the Sturgeon Country greenhouse and garden centre. The water is coming from the melting snow and a too-shallow ditch, where half forks through the property.

The ditch itself is on provincial property. CTV says the province of Alberta would not speak with them due to the election campaign cycle.

For owner Debbie Foisy, this is the busiest time of year for her and her staff in getting ready for the season. “I have a great team and they’re prepared to put in extra hours once the greenhouse floor dries up, to get back on schedule,” she tells Greenhouse Canada.

Sturgeon County has been helping with the cleanup using water pumps.

“The pumps can barely keep up but I think the peak of the snow melt has passed,” says Foisy. “It will be a week or so before it’s dry.” But the most difficult thing, she says, has been getting up at night to refuel the pumps and still juggle family responsibilities. She also has concerns around her water and propane deliveries, which could be affected by the flooding.

Over the past two years, Foisy has filed multiple complaints about flooding on her property from the shallow ditch, but this is the worst case she’s had.