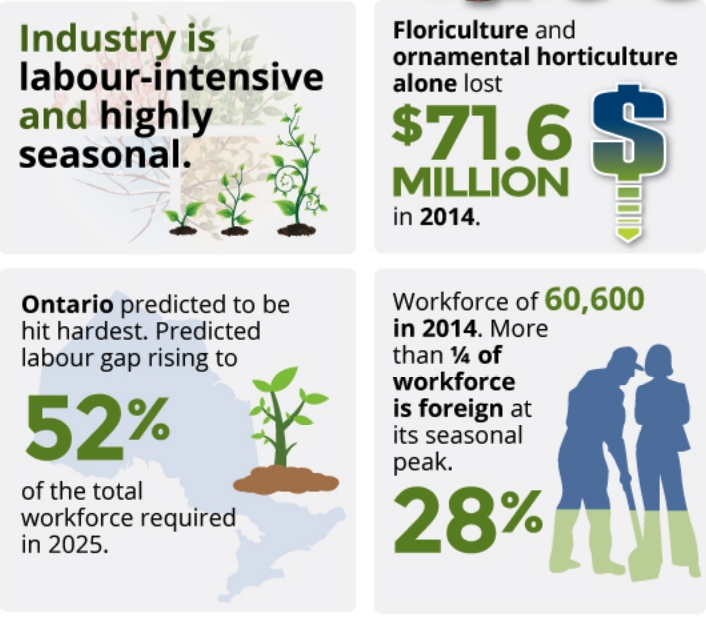 The greenhouse, nursery and floriculture industry is Canada’s largest agricultural employer, but it faces some significant challenges ahead.

The Canadian Agricultural Human Resources Council (CAHRC) estimates that 2,800 unfilled jobs costed the greenhouse, nursery and floriculture industry approximately $100 million in losses in 2014. Floriculture and ornamental operations felt the brunt of the impact at $71.6 million, compared to food crop operations at $28.4 million.”

CAHRC also estimates that the industry will need to fill another 7,500 jobs to meet market demand by 2025, while the domestic labour pool continues to shrink. Employing about 41% of the industry’s workforce, Ontario is expected to be hit hardest, “with the labour gap rising to 52 per cent of the total workforce required in that province.”

Historically, attracting domestic workers has been a challenge due to the seasonal nature of the work. However, the forecast notes that there are some advantages. The industry houses a younger demographic, which has been impacted to a lesser degree by retirement, and has benefited from below-average turnover rates among seasonal workers. Compared to other agricultural sectors, these operations also tend to be closer to urban centres, increasing the pool of job candidates.